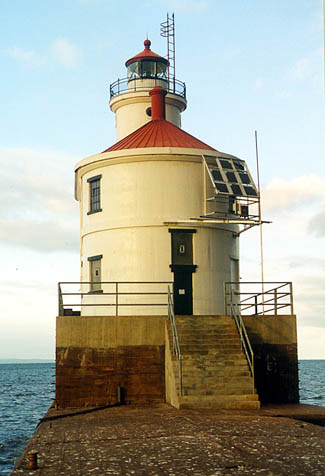 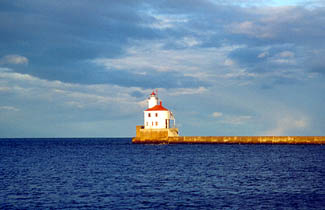 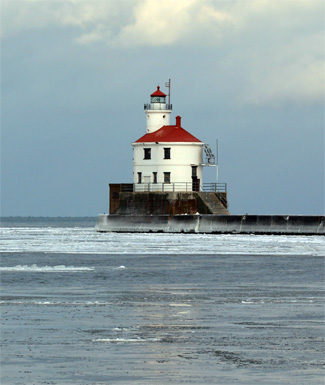 Superior Bay is a natural harbor in the southwest corner of Lake Superior that is fed by the St. Louis River and empties into the lake through a natural opening, known as Superior Entry. This entry serves as a state line and is bounded by the appropriately named Minnesota Point to the west and Wisconsin Point to the east. Together, these two points create the longest freshwater sandbar in the world.

A lighthouse commenced operation on Minnesota Point in 1858, just five years after the completion of the bypass canal at Sault Ste. Marie that allowed vessels to easily move between Lake Superior and the lower Great Lakes. Minnesota Point Lighthouse was extinguished in 1885, after its role had been taken over by a pierhead light on the northwest side of Superior Entry. In June 1893, the pierhead light, a skeletal frame structure of twelve-inch square timbers, was moved to the pier on the southeast side of Superior Entry, where an elevated walkway was built to provide access to the light in stormy weather. The Lighthouse Board recommended that a fog signal be added to serve with the relocated light and that a dwelling be erected on the Wisconsin side of the entry for the keeper, who was still living in the dwelling at the old Minnesota Point Lighthouse. At this time, over 900 vessels arrived and cleared from Superior Bay each year, carrying commerce with a value of over $28 million.

A six-inch steam whistle, housed in a twenty by forty-foot building just behind the light, was placed in operation for the first time on October 15, 1893, and a duplex, with six rooms in each of its apartments, was built for the two keepers now required to run the station. During its first decade of operation, the steam whistle was in operation an average of 394 hours each year.

In 1898, a pole was placed on the inner end of the south pier, and a post lantern was shone from it to range with the pierhead light. This rear pole light was replaced in 1902 by a square, pyramidal frame tower, sixty-two feet high, which was painted white and topped by a black octagonal lantern room. A fourth-order lens was mounted in the lantern room and started to display its fixed white light with the opening of navigation on April 1, 1902. This frame tower had previously been used as a temporary lighthouse on Devils Island and became available in late 1901 after that station was completed.

The lights on the docks and in the streets of the town of East Superior, Douglas County, Wis., back of Superior Entrance, are confusing to mariners. Some change is needed which will render the range lights of the harbor more conspicuous and more easily distinguished by vessels desiring to enter from Lake Superior.

The War Department, in the progress of river and harbor improvements, is now engaged in building a concrete pier to the south of the old timber pier upon which the fog-signal and range lights now stand. After the construction of the concrete pier it is proposed to remove the crib pier, and this will of itself compel the removal of the present structures.

It is estimated that it will cost $20,000 to reconstruct the range lights and fog-signal house on the permanent concrete pier now being built and for the changing of the lens apparatus of both beacons, and it is recommended by the Light-House Board.

Before the new pier was finished, a storm on November 27 and 28, 1905 washed away the front light and heavily damaged the fog signal building, rendering the steam whistle inoperable. Two-thirds of the northwest wall was destroyed and about forty tons of coal along with valuable tools and supplies were swept away. Repairs to the fog signal and elevated walkway were effected, and trestle steps were installed to provide access to the roof of the signal building, where a temporary frame lantern was placed to serve as the front light.

On June 30, 1906, Congress appropriated $20,000 for range lights to mark the new south pier, but after this appropriation, the Superior Entry project was expanded to included not only new parallel piers but also two converging breakwaters to protect the entrance. The Lighthouse Board requested an additional $25,000 to cover a light and fog signal on the southern breakwater, and three non-attended acetylene beacons to mark the piers and northern breakwater. Congress provided this amount on March 4, 1911, and work on the new lighthouse commenced that fall.

Superior Entry Lighthouse went into commission on June 30, 1913 at the outer end of the southern breakwater. This two-story, concrete structure is oval in plan and situated on a concrete pier that rises eleven-and-a-half feet above the concrete breakwater. A circular tower rises from the outer end of the lighthouse, and is surmounted by a cast-iron deck and a fourth-order helical bar lantern room, from which an occulting white light was exhibited by a fourth-order, Sautter, Lemonier, & Cie. drum lens at a focal plane of seventy feet. A clockwork mechanism, powered by a seventy-five pound weight that was suspended in a drop tube and had to be wound up every four hours, revolved a screen inside the lens to produce the lights characteristic: five seconds of light, followed by five seconds of eclipse.

The concrete pier beneath the lighthouse provided storage for oil, paints, gasoline, and water. The first story of the lighthouse housed two twenty-two-horsepower air compressors and tanks, a heating plant, a bathroom, and cold storage room, while the second story contained a kitchen, living room, three bedrooms, and a bathroom. A siren room in the tower housed the trumpets that sounded a three-second blast every fifteen seconds.

Roger Campbell was serving as first assistant keeper of the Superior Entry Lights in February 1914, when one day he headed down the ice along the shore to hunt rabbits. When he was about seven miles from the entry, he realized the ice he was on had separated from the shore and he was being blown out into the lake. Alarmed but clear-minded, he discharged his rifle repeatedly and managed to attract the attention of three men on shore, who braved the icy waters and came to his rescue in a rowboat. As Campbell was being pulled into the rowboat, the large ice floe he had been stranded on started to break up.

A radiobeacon was established at Superior Entry in 1938 as an additional aid to mariners during periods of limited visibility.

The station was automated in 1970, when a DCB 24 aerobeacon was installed in the lantern room. Shortly after the automation, Peter E. Jones was serving at the Coast Guard base in Duluth which was now responsible for the light. When Superior Entry Light was reported out, Jones and another coastguardsman took a boat over to Wisconsin Point and then walked out on the breakwater. The light was not functioning as they approached the lighthouse, but when they got up into the lantern room, it was flashing. The pair checked the spare bulbs in the automatic changer and found they were all good. Upon returning to the boat, the coastguardsman said, You know, I had the strangest feeling that someone was in the tower with us. Jones just laughed and told him not to watch so much TV.

It was no laughing matter when Jones was sent back to the lighthouse four days later. As he was walking down the breakwater to check out the light, it started flashing again, and Jones could find nothing wrong with the apparatus or any signs of a forced entry at the lighthouse. A week later, Jones was back at the lighthouse following the report of another outage. This time, however, the light was still off when he reached the lantern room. As he was leaning against the lantern room glass studying the problem, the light suddenly came back on. A bit startled and more than a little annoyed, Jones spoke out to any perpetrator that might be listening. I dont know if youre an old keeper or assistant keeper, but please stop doing this. A crew will not be coming back, no matter what you do or how lonely you are; youll just be stuck with me each time something happens. If you are one of the old keepers, its your job to help me keep the light running and Id appreciate your assistance in doing so.

Jones received the impression that he had connected with someone  or something, and over the next several months, before he was transferred to another station, the light never malfunctioned again. The light and foghorn remain active today.

On May 1, 2013, the General Services Administration (GSA) announced that Wisconsin Point Lighthouse was excess to the needs of the Coast Guard and was being made available at no cost to eligible entities defined as federal agencies, state and local agencies, non-profit corporations, educational agencies, or community development organizations, for education, park, recreation, cultural, or historic preservation purposes. Interested entities were given sixty days to submit a letter of interest. The lighthouse was supposed to go to auction after no suitable organization was found to assume ownership, but when the Corps of Engineers decided it did not want to issue leases of its piers to private parties, the GSA released another Notice of Availability for Wisconsin Point Lighthouse in June 2016.

When no interested party was identified to accept ownership of the lighthouse, the GSA initiated an online auction for the lighthouse on July 11, 2019 with a starting bid of $10,000. Nine bidders participated in the auction, which closed on August 26 with a winning bid of $159,000. The winner of the auction was soon identified as Steven Broudy, a thirty-four-year-old tech executive from San Francisco who served tours in Iraq and Afghanistan. Broudy had never seen the lighthouse in person before winning the auction, but he quickly planned a trip to inspect his new lighthouse.

My inspiration is Henry David Thoreau, Broudy explained. Im a huge fan of Walden and just the idea of finding a place to live in isolation, and just be very deliberate, has always been really inspiring to me. He plans to renovate the interior of the lighthouse so he can spend at least a few weeks there each summer. Renting the lighthouse out as a writers retreat or through Aribnb are also possibilities.

For a larger map of Superior Entry Breakwater Lighthouse, click the lighthouse in the above map.

From Highway 2 south of Superior, turn east on Moccasin Mike Road and travel 1.4 miles. At this point, turn left onto Wisconsin Point Road and follow this road out onto Wisconsin Point at the end of a narrow finger of land helping to form Superior Bay. Superior Entry Lighthouse can be see on your right near the end of the road. As the first portion of the breakwater is composed of large stone blocks, some agility and a great deal of energy may be needed to reach the lighthouse.