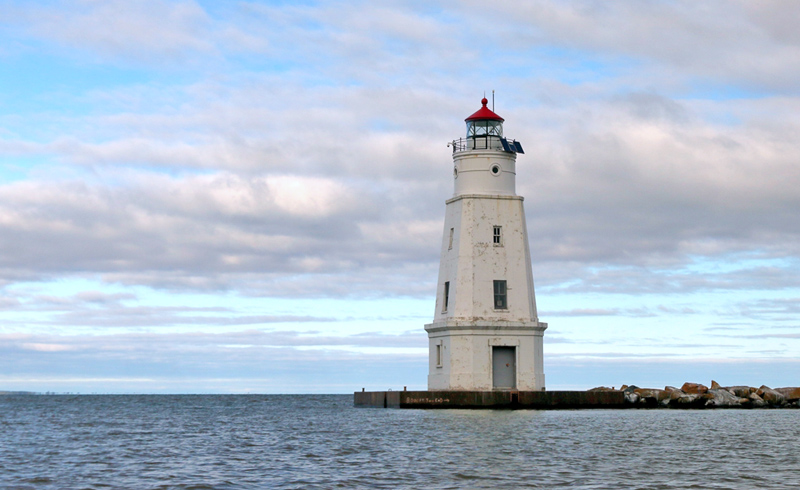 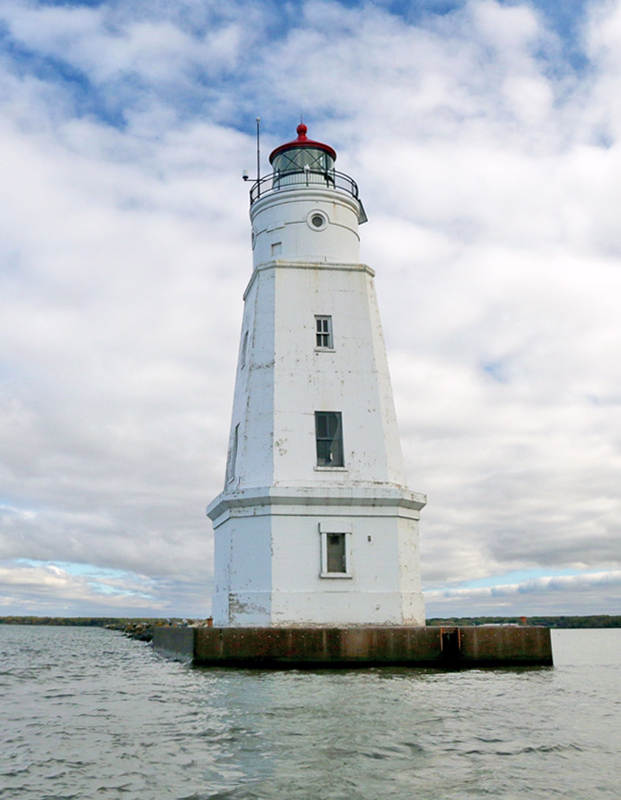 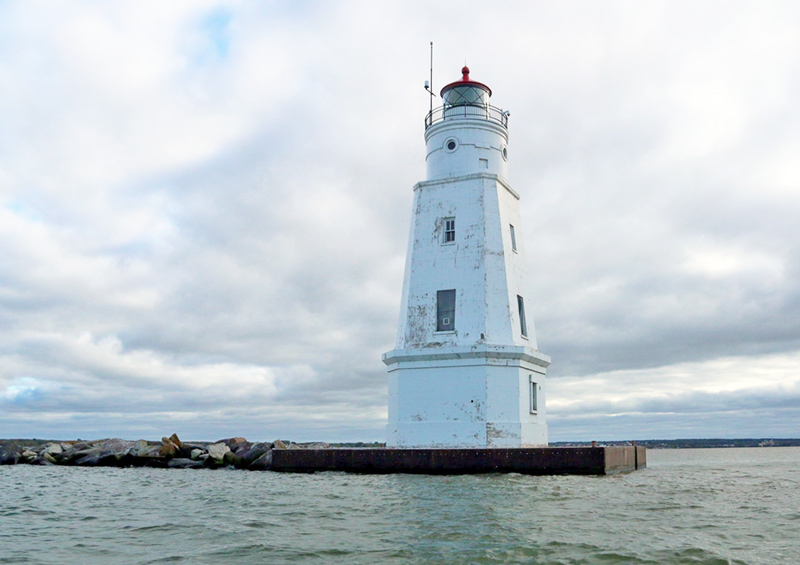 Situated on the southern side of Chequamegon Bay, the City of Ashland was incorporated in 1887. Several docks and piers were built along the shore at Ashland to support the export of brownstone, lumber, and iron ore, an important part of the citys economy.

Between 1889 and 1893, a mile-and-a-half-long breakwater was constructed northeast of the harbor at Ashland as a protection for ships during northeast storms. To strengthen the breakwater, built of piles capped with a concrete slab, riprap was placed along its length between 1903 and 1909 to form a rubble mound breakwater. A fixed lens lantern was established on a new pierhead crib off the western end of the breakwater on July 1, 1911.

Three hundred and fifty tons of rock were placed atop the pierhead to hasten its settling, and by the spring of 1913, it had settled 3.16 feet, with only 0.01 foot of settling in the last six months. With the pierhead having reached a fixed position, the rocks were removed, and a concrete cap was poured on top of it.

After Congress appropriated $25,000 on October 22, 1913, construction commenced on a reinforced concrete lighthouse atop the pierhead in 1914 and continued until weather conditions forced the work to be stopped for the winter. Work resumed the following year, and the towers fourth-order, Sautter, Lemonier & Cie Fresnel lens was placed in operation on October 15, 1915.

The Lighthouse Service gave the following description of the lighthouse:

The foundation consists of a timber crib sunk on a dredged mud fill and filled with stone. On this crib which extends to about 2 feet below low-water level is placed a concrete pier superstructure on top of which the tower is carried centrally. The tower is hexagonal in plan and pyramidal in shape with a cylindrical watch room. The materials of walls are of reinforced concrete throughout except the watch room which is of steel. The first story of tower has vertical walls, the pyramidal section starting at the second floor level. In plan the base of tower is 21 feet over all, tapering to extreme dimensions of 13 feet 6 inches at the base of the watch room. The cylindrical watch room is surmounted by a fourth-order helical bar lantern, with a focal plane 55 feet above the top of the pier. All windows and doors in outside walls throughout are of steel. Partitions are of cement planter on metal lath and floors are of reinforced concrete. Floors of all rooms except first floor and watch room are covered with a hardwood floor, secured to nailing strips in the concrete. The concrete floor of watch room is covered with a special floor covering. The outside walls are left natural concrete finish. Provision has been made in the base of the tower so that the entire superstructure can be releveled, should this ever become necessary, by means of hydraulic jacks. This precaution was taken owing to settlement that had been observed in the substructure prior to construction of the tower proper. Living quarters are provided in the second and third stories of tower, to be occupied in case of necessity. The pier is provided with a derrick for handling the keepers launch.

A five-room, frame keepers dwelling was built on shore within view of the lighthouse, and a boathouse was placed nearby atop a cribwork on a submarine site. Commercial power was run to a control station at the boathouse where it was transformed from 2,200 volts to 220 volts and 110 volts. An armored submarine cabled led from the control station to the eastern end of the breakwater and then followed the breakwater to the lighthouse. A common sign flasher in the control station produced the lights flashing characteristic of two seconds of light followed by a one-second eclipse. An electric siren fog signal was located in the towers watchroom, from where a galvanized sheet metal trumpet protruded to concentrate the sound. The fog signal produced a four-second blast in every twenty seconds. The total cost for the lighthouse came to $24,943.80.

James H. Bergan served as the first keeper of Ashland Breakwater Lighthouse, but his service was cut short when he passed away of a heart attack on September 23, 1922. His wife and family minded the light until Roger Campbell, the replacement keeper, was transferred to the station. On September 29, 1924, Keeper Campbell rescued the occupants of the disabled motorboat U 297, which had stalled in the bay in a northeast storm and had partly filled with water.

In 1925, the lighthouse was out of commission for a period due to damage to the submarine cable. A large amount of new cable was laid, and the light resumed operation on June 15 of that year.

Frank Mersy was transferred to Ashland Breakwater Lighthouse in 1925, and in November of the following year, he rowed out to service the light and got marooned at the tower when a sudden storm blew up. Since the keeper lived onshore, the lighthouse was not provisioned for lengthy stays. After three days, supplies ran out at the tower, and Mercy was forced to attempt the two-mile crossing in his boat.

As he neared shore, large patches of heavy ice blocked his way. Luckily, some men noticed his predicament and strapped on their skis to see if they could help. The men cautiously made their way across the ice to a point where they could throw a rope to Keeper Mersy, and with a towline in place, the men pulled the boat to safety. As Keeper Mersy retired that night in his own bed, he must have given thanks for the kindness and mercy he was shown that day.

Earl Seseman, the last keeper of the light, replaced Mersy in 1947 and served until the light was automated in 1962.

The Fresnel lens was removed from the lantern room and replaced by a modern optic in 1980. The keepers dwelling and boathouse associated with Ashland Breakwater Lighthouse remain standing along the shore just east of the AmericInn in Ashland.

A reminder of the importance of Ashland Harbor was a massive concrete ore dock built in 1916. The structure was 1,800 feet long, seventy-five feet wide, and eighty feet high. After the shipment of ore stopped in 1965, the dock fell into disrepair, and by 2007 it was declared a safety hazard. The planned demolition of the dock in 2010 was delayed due to a permitting dispute. Demolition of the dock finally began in 2012 and was completed in 2013.

On May 15, 2012, Ashland Breakwater Lighthouse was made available under the National Historic Lighthouse Preservation Act of 2000 to eligible federal, state, and local agencies, non-profit corporations, educational agencies, and community development organizations to be used for educational, recreational, cultural, or historic preservation purposes. Interested entities were given two months to submit a letter of interest expressing their desire to submit an application for ownership.

In 2014, a measure in the 2015 National Defense Authorization Act transferred Ashland Breakwater Lighthouse to the National Park Service. The breakwater lighthouse thus became the ninth lighthouse included in Apostle Islands National Lakeshore. The addition of the Ashland Harbor Light to the Apostle Islands National Lakeshore means two great things, said Bob Krumenaker, Superintendent of the Apostle Island National Lakeshore. It preserves an important piece of history for the benefit of this and future generations of Americans in their national park system. And since Ashland now has a national park in its front yard, its a welcome catalyst for the National Park Service and the people of Ashland to work together for the common good.

Located at the end of a detached breakwater extending from near Ashland far out into Chequamegon Bay.
Latitude: 46.62818, Longitude: -90.87048

For a larger map of Ashland Breakwater Lighthouse, click the lighthouse in the above map.

Views of the lighthouse can be had from several places in Ashland along Highway 2. Perhaps the best place is Bayview Park.