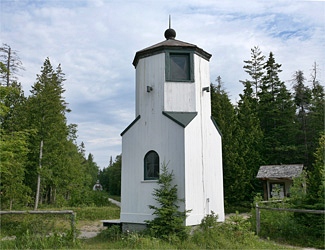 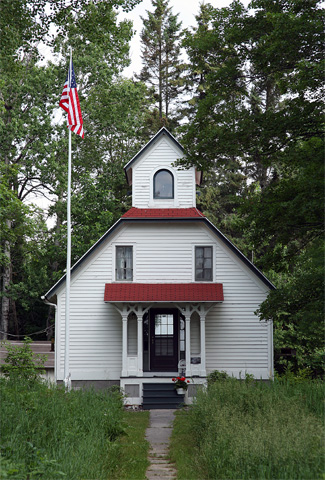 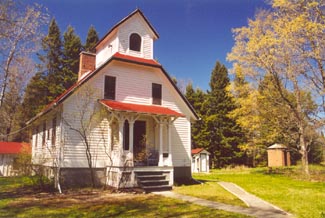 Baileys Harbor is named after Captain Justice Bailey, who sought shelter in the bay during a storm in 1848. Captain Bailey took samples of the areas natural resources back to his boss, Alanson Sweet, in Milwaukee, and the following year Sweet bought up land in the area and had soon established a quarry, sawmill, and small settlement around the bay. The federal government awarded Sweet a contract to construct a lighthouse on an island at the southeast side of the harbor, and the light went into operation at the opening of navigation in 1853.

Groundings in the harbor had become common in the 1860s, largely due to the placement of Baileys Harbor Lighthouse. Shoals at the entrance to the harbor made it difficult, even in good weather, for ships to use the light to enter the harbor safely. If a ship were even slightly off course to the east, it ran the risk of running aground.

In 1866, an inspector for the Eleventh Lighthouse District announced that the deteriorated Baileys Harbor Lighthouse needed to be rebuilt. Fifteen thousand dollars was requested by the Lighthouse Board, three times the original construction cost. Though the funds were appropriated and the project approved, in 1867 the Lighthouse Board decided instead that range lights at the head of Baileys Harbor and a coastal lighthouse on nearby Cana Island would better serve navigation.

On July 20, 1868, the Federal Government appropriated an additional $6,000 to complete the projects, and the front and rear range lights were constructed in the summer and fall of 1869 by a crew from Detroit led by Andrew Breitach. The keepers house, into which the rear range light was incorporated, was a one-and-a-half-story dwelling, measuring thirty-five by twenty-four feet and resting atop a fieldstone basement. The seven-room dwelling included a shed-roof-topped kitchen attached to the back while a full-length porch adorned the front. A rectangular lantern room rested atop the front gable of the dwelling, making the whole structure resemble one of those old school houses with a bell tower perched at one end of its roof. The rear light, a fixed-white light produced by a fifth-order Fresnel lens from Henry-Lepaute of Paris, France, was displayed from a radius top window on the south face of the lantern room.

The front range light was constructed 950 feet south of the keepers dwelling and near the shore at the head of the harbor. This tower was approximately ten feet square at the base, but about midway up the corners were cut back to create an octagonal tower. A steamer lens was used to display a fixed-red light from a rectangular window on the seaward side of the tower, while a smaller window on the opposite face of the tower allowed the keeper to monitor the light from the dwelling without having to walk to the front tower. Both lights burned lard oil, which made them difficult to manage in the winter. Mariners were instructed to keep the white light directly above the red light as they entered the harbor.

Fabian Truedell was appointed the first keeper of the Baileys Harbor Range Lights on December 1, 1869, though the lights were not put into operation until the opening of navigation the following year. Truedell was seventy-four when he accepted the appointment and served for over two years before resigning in September 1872. Shortly after Marcus Shaler succeeded Truedell, a devastating fire swept through Baileys Harbor. The range lights were fortunately spared, but two years later a more deadly menace swept through the area  typhoid fever. Keeper Shalers wife Lucy diligently attended those who fell ill until she too succumb to the disease, passing away on January 26, 1875 at the age of forty-three. Heartbroken, Shaler stayed on as keeper for a few more months before resigning his post in April 1875 and returning to Green Bay.

On April 15, 1875, Shaler was replaced by Joseph Harris, Jr. whose father, Joseph Harris Sr., was instrumental in the construction of the Sturgeon Bay Ship Canal and likely used his political connections to secure the position for his son. When completed in 1881, the canal significantly reduced shipping activity in Baileys Harbor. Keeper Harris served in the Civil War until he was discharged after being wounded in the Siege of Petersburg.

Keeper Harris and his family were active members of the community, and in 1876 Joseph Jr. founded the Baileys Harbor Literary Club, a debating society. The keeper of the range lights participated in debates covering such topics as foreign immigration and whether solitary confinement was more effective than capital punishment.

In 1883, a stable was built, and a fifty-foot-deep well was drilled and lined with iron pipe to provide an abundant supply of water. A brick oil house was constructed at the station in 1895 to store the volatile kerosene, which had been used in the lights since 1880. Also in 1895, a 1,074-foot-long sidewalk was laid through the swamp to link the front and rear range lights, and 120 feet of sidewalk were built between the oil house and the dwelling.

In 1896, Henry H. Gattie was transferred to the Baileys Harbor Range Lights from Sturgeon Bay Ship Canal Light Station. When he arrived at Baileys Harbor, Keeper Gattie was an eligible bachelor, and his travels with female companies along with the well-attended parties held at his home were documented in the local papers. Though quite social, Gattie by no means neglected his lightkeeping duties. In fact, the station under his care was described as being as neat and bright as a new pin.

Gatties attention eventually narrowed to Eva Hendricks, and the two were married at the home of the brides mother in Baileys Harbor on February 18, 1901. The keeper duly noted this important event in his logbook: My wedding at 4 PM. The Duclon Orchestra, comprised of members of the Eagle Bluff Lighthouse keepers family, performed at a ball held for the couple at Baileys Harbor House. The Door County Advocate carried the following report on the festivities: Both young and old made merry well into the following morning when they departed with regrets that Mr. and Mrs. Gattie could not be married at least once a month.

In the 1920s, the Bureau of Lighthouses developed an almost completely automatic acetylene gas system to replace kerosene lamps. Though the system required new lamps, existing lenses could be used, and the lights would only require an occasional check-up. On August 25, 1922, acetylene lights were placed in both range lights with the front light flashing white every three seconds and the rear light flashing red every two seconds. In September 1923, after having served longer than any other keeper at Baileys Harbor, Henry Gattie was transferred to nearby Cana Island Lighthouse, where his responsibilities included the occasional maintenance trip to his former station.

The Bailey Harbor Range Lights were electrified in 1930, and the keepers dwelling, which had stood vacant for several years, was leased to the Immanuel Lutheran Church of Baileys Harbor for use as a parsonage. The minister, or a member of his family, was responsible for minor maintenance, such as changing burned-out bulbs and fuses, but could always call the keeper at Cana Island if more attention were needed.

Permission was granted to the Door County Park Commission in 1934 to use the lighthouse acreage, except for the land immediately surrounding the two range lights, as a park. A few years later, the commissioners decided to clear some of the land for use as a trailer park, but opponents quickly joined together and formed The Ridges Sanctuary in 1937 to stop the development and preserve the unique terrain.

The church vacated the keepers dwelling in 1956, and after being vacant for nearly a decade, the residence was used to house a naturalist for the sanctuary starting in 1965. In 1969, one hundred years after the range lights had begun operation, a single directional light was established on a metal tower just south of the front tower, and the lenses were removed from the historic range lights.

In 1972, a ninety-nine-year lease for the range lights, oil house, a two-hole privy, and the light station acreage was granted to The Ridges Sanctuary, which raised over $70,000 to rehabilitate the structures in the early 1990s. The lights were rewired in 1996 and two replacement beacons, on loan from the Coast Guard, were placed in the lantern rooms. Though the modern light remains the official navigational aid, the lights in the historic towers are occasionally lit.

On August 18, 2015, three coastguardsmen from Two Rivers Coast Guard Station removed the modern skeletal tower with its directional beacon and red-and-white dayboard, and returned the historic Baileys Harbor Range Lights to service, after having been inactive for forty-six years. The front tower, painted white with a red roof, displays a red light, while a white light is displayed from the rear tower. When their lights are aligned, one over the other, the historic range towers now once again help mariners safely enter Baileys Harbor.

For a larger map of Baileys Harbor Range Lights Lighthouse, click the lighthouse in the above map.

From Highway 57 just north of the town of Baileys Harbor, turn east onto Ridges Road and follow it 0.3 miles to Bailey Harbor Range Lights. The range lights are part of The Ridges Sanctuary, which charges a fee to use their hiking trails and boardwalk. The rear range light, which the sanctuary is working to restore, is open for tours in the summer.