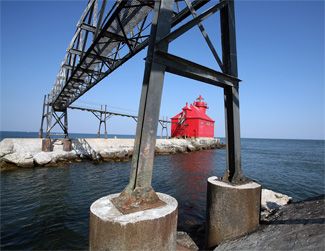 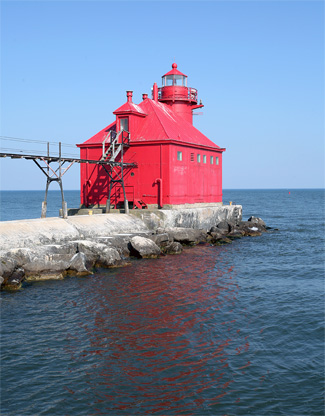 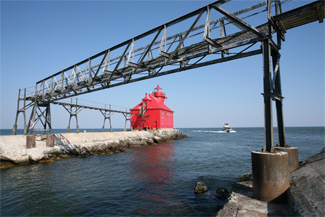 Several lights have been established along the Sturgeon Bay Ship Canal over the years, but the first of these was Sturgeon Bay Ship Canal Pierhead Lighthouse. Located just off the coastline of Lake Michigan, the lighthouse was constructed in October and November of 1881, after Congress finally appropriated money for the project originally proposed by the Lighthouse Board in 1873. The light guides ships into the eastern entrance of the Sturgeon Bay Ship Canal, which provides a shortcut to Green Bay, avoiding the dangerous Northern Passage around the Door Peninsula commonly referred to as Deaths Door. Joseph Harris, Sr., editor of the Door County Advocate, was largely responsible for the construction of the canal. In 1855, Harris arrived in Sturgeon Bay convinced of the need to construct a canal to connect Sturgeon Bay to Lake Michigan. He was able to gain support for the project by promoting its economic potential based on the collection of tolls from vessels using the passage.

The Sturgeon Bay and Lake Michigan Canal and Harbor Company was established in 1872 as a private venture by a group of local businessmen. Construction on the 6,600-foot-long canal began in July 1872. The waterway is approximately seven miles in length, and consists of two parts: a dredged portion of Sturgeon Bay and a 1.3-mile canal dug through the Door Peninsula. This shorter portion was dug by a private group headed by William B. Ogden, then-president of the Chicago and North Western Railway, between July 8, 1872 and late fall of 1881. Although some ships began using the canal in 1880, it was not open to large vessels until 1882.

While on an inspection tour of lighthouses on the Great Lakes, Commodore Alexander Murray traveled to Sturgeon Bay to monitor construction of the canal and determine if the Lighthouse Board should place any navigational aids in the area. Canal owners and mariners wanted both a lighthouse and breakwater built at the eastern end of the canal, but the government was reluctant to directly aid the private venture. Petitions from local businessmen, coupled with a favorable review of the project by Commodore Murray, convinced the Lighthouse Board to recommend the construction of a lighthouse at the lake entrance, which it did in 1873.

Construction of a breakwater and harbor of refuge was begun by the Corps of Engineers in the late 1870s. This work consisted of a north pier and south pier, located at the lake end of the canal. The piers were 850 feet apart at the shoreline and extended into Lake Michigan about 1,100 feet, before converging to create an entrance with a width of 335 feet. Two smaller detached piers, approximately 150 feet long, extended eastward from the entrance.

Charles Dobson, who had recently completed the Dunlap Reef Range Lights in Sturgeon Bay, supervised construction of a lighthouse at the outer end of the detached portion of the northern pier. Material was brought to the site by barge in October 1881 and work was completed in late November. Besides the wooden frame light tower, a wooden elevated walkway was constructed from the lighthouse to the shore so the keeper could reach the light in inclement weather. The lantern room arrived later that year, but was not installed until March 1882.

On May 15, 1882, Rufus M. Wright, the first keeper, lit the lamp inside a sixth-order Fresnel lens to display the stations fixed red light for the first time. Keeper Wright initially lived on a canal company dredge, which moved about in the canal and harbor, and then in the canal companys boarding house. In June 1886, the Lighthouse Board finally began construction of a wooden, two-story keepers dwelling on acreage transferred to the government by the canal company (a lifesaving station was also built on the property that same year.) Keeper Wright was never able to enjoy the new residence, however, as he was relieved of duty on October 2, 1866, just days before the dwelling was completed. Though it is rumored that Wrights behavior had become questionable and slightly erratic after he left his position as keeper, no official reason for his removal was ever recorded. He later died of a burst blood vessel at the home of a friend in 1889.

Dense fog banks frequently shrouded the entrance to the canal, so in 1884, a fog signal was established on the pier just shoreward of the light. Two buildings measuring seventeen feet wide by thirty-two feet long were erected on the pier, one behind the other, to house duplex steam boilers to power a fog whistle. Due to the added responsibilities that came with this equipment, Charles Oliver Chapman was hired as Wrights assistant. Chapman was well qualified for the position, as he had previously worked with steam engines at a gristmill and aboard vessels. The whistle sounded for five seconds followed by thirty-five seconds of silence and could be heard at a distance of eight to twelve miles, depending on conditions.

By 1902, the pierhead light and fog signal were in need of major repairs, prompting the Lighthouse Board to recommend the construction of a new combined fog signal and light. A work crew arrived at the station in May 1903 and relocated the light to the outermost point of the pier so work on the new structure could begin. After concrete footings were in place, quarter-inch steel plate was riveted to metalwork to create a twenty-four by thirty-three foot building, with a hipped roof and a circular light tower at its eastern end. The lantern room and a fifth-order Fresnel, which replaced the original sixth-order Fresnel lens in 1900, were transferred from the old light to the new tower, and the combination light and fog signal was completed and tested in early September 1903.

Keeper Chapman witnessed the erection of the tall, onshore Sturgeon Bay Ship Canal Lighthouse to serve as a coastal beacon in 1898 and was still serving as keeper when the new pierhead lighthouse was finished in 190. Other improvements witnessed by Keeper Chapman included:

Up to five keepers were needed to maintain the fog signal, two lighthouses, and minor lights along the canal, so Chapman served with numerous assistants over the years. His favorite, though, was probably his son, Claude, who served as assistant keeper at Sheboygan Lighthouse before being assigned to the Canal Station as third assistant shortly before Christmas in 1906. Claude married in April 1909, and later that year a local doctor diagnosed his father with stomach cancer. Charles Chapman became quite ill and passed away the following spring at the Canal Station, which had been his home for the previous twenty-six years. Friends and family chartered the steamer Sailor Boy to transport them from Sturgeon Bay to the station where they attended a service for Keeper Chapman. Afterward, the body of the deceased keeper was taken to Sturgeon Bay aboard the steamer, where he was laid to rest at Bayside Cemetery.

Conrad Stram served as head keeper of the Canal Station from 1927 to 1933 and is responsible for the following report that demonstrates that a fog signal alone was not always sufficient at guiding a vessel to the canal entrance:

On June 12, 1928, there was a bank of fog outside at a distance of about 4 miles and as boats were blowing the fog signal was put into operation. About 12:20 p.m. a whistle, which I figured was a car ferry, was blowing, coming from the east shore, but she got about 2 miles south when off the canal with a moderate to almost fresh south wind. There the car ferry stayed, blowing its fog signal occasionally, and finally stopped at about 3 p.m., when I figured she had gone south. The Coast Guard station then got a call from the Ann Arbor car ferry office at Menominee wanting to know if the fog signal was in operation. When I got this information I told the Coast Guard on duty to call the Menominee office and have them radio the captain of the car ferry to run 2 miles north and come in. She went north and stopped, but I expect could not see the shore, but she could be seen from shore; when another call came wanting to know where she was then, and the Coast Guard answered that she was about 4 miles out in line with the canal. She was soon out of the fog and it was the Ann Arbor car ferry No. 5.

In 1930, the light was electrified and the fog signal changed to an air diaphone. Also that year, a radiobeacon was established at the station as an additional aid for mariners operating in limited visibility.

The numerous structures at Sturgeon Bay Ship Canal Light Station remain in immaculate condition today, receiving the attention of the Coast Guardsmen who are staffed there.

A Notice of Availability, dated June 28, 2010, announced that Sturgeon Bay Ship Canal Pierhead Lighthouse was excess to the needs of the United States Coast Guard and would be made available at no cost to eligible entities defined as Federal agencies, state and local agencies, non-profit corporations, educational agencies, or community development organizations for educational, park, recreational, cultural or historic preservation purposes. Qualifying organizations were given sixty days to submit a letter of interest.

After no qualified steward was found, an online auction for the lighthouse opened on July 23, 2014. Four people participated in the auction, which closed on September 12, 2014 with a high bid of $48,500. The winner of the auction was Gordon Krist of Paris, Kentucky.

For a larger map of Sturgeon Bay Ship Canal Pierhead Lighthouse, click the lighthouse in the above map.