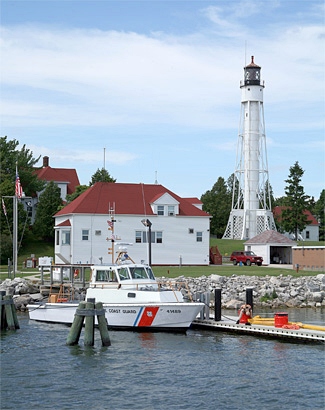 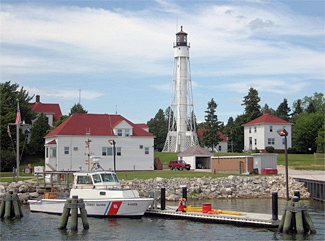 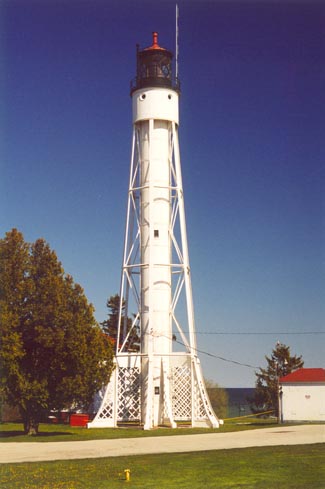 In 1873, construction began on the Sturgeon Bay Ship Canal to connect Sturgeon Bay, which already nearly bisected the Door County Peninsula, with Lake Michigan. Joseph Harris, Sr., editor of the Door County Advocate, was largely responsible for the canal. After arriving in Sturgeon Bay in 1855, Harris was quickly convinced of the need for the canal and was able to gain support for the project by promoting its economic potential based on the collection of tolls from vessels using the passage. Sturgeon Bay Canal Pierhead Lighthouse, located just off the coastline of Lake Michigan, was constructed on a pier at the eastern end of the canal in late 1881, after Congress finally appropriated money for the project that was originally proposed by the Lighthouse Board in 1873. The light guides ships into the entrance of the canal that provides a shortcut to the southern end of Green Bay enabling ships to avoid the dangerous Deaths Door passage at the northern tip of the Door Peninsula.

As boat traffic increased both through the canal and up and down the western shoreline of Lake Michigan, complaints were received that the Pierhead Light was inadequate. This judgment was reasonable as the light was only equipped with a sixth-order lens and was meant to serve as a harbor light, not a coastal light. In 1890, the Lighthouse Board recommended that Congress appropriate $20,000 for a coastal light to be erected onshore near the keepers dwelling for the Pierhead Light.

The Federal Government purchased the ship canal in 1893 for $103,000 and placed it under the authority of the U.S. Corps of Engineers, who transferred responsibility for the operation of three small navigational lights along the canal to the Lighthouse Board in 1896. A second assistant keeper was assigned to the Canal Station to assist with this added workload. After repeated requests, Congress finally approved $20,000 on March 2, 1895 for the coastal light, which would be known as Sturgeon Bay Ship Canal Lighthouse.

In 1896, test borings made just north of the keepers dwelling to a depth of forty-nine feet proved that the underlying material could support the cylindrical steel tower proposed for the site. On May 13, 1898, the lighthouse steamer Amaranth docked in Sturgeon Bay loaded with materials for the project. A concrete slab, twenty-nine feet square and with a depth of eight feet, was first poured at the site, and bolts with a diameter of two inches and a length of seven feet six inches were set in the concrete to help anchor the tower. The outer shell of the tower consisted of curved sections of one-half-inch steel plates and had a diameter of eight feet. A spiral staircase was constructed between the outer wall and an inner wall that was built with 3/8-inch steel and had a diameter of two feet.

Atop the seventy-eight-foot-tall cylindrical tower, workmen installed a watchroom that had a diameter of twelve feet and was seven feet tall. Porthole windows provided light for the watchroom, while rectangular windows were used in the tower. A lantern room, eight feet seven inches in diameter and with a height of seventeen feet nine inches to the top of its ventilator ball, was centered above the watchroom. A third-order Fresnel lens, composed of eight flash panels and manufactured in Paris by Henri Le Paute, was mounted on a pedestal in the lantern room, and the weights to revolve the lens were suspended in the hollow center of the tower.

The Ship Canal Lighthouse was officially completed on October 3, 1898, but when Keeper Charles Chapman tested out the light later that month, it was soon apparent that the tower had some serious design issues. The tall cylindrical tower was supported by eight steel buttresses, each sixteen feet high and extending six feet outward from the tower, but these were not enough to prevent the wind from causing the tower to vibrate so violently that the clockwork mechanism was unable to rotate the lens at a consistent rate.

Lighthouse officials ordered four cement blocks with eyebolts to be placed in the ground around the tower in early December, and steel guy wires with turnbuckles were then strung from the eyebolts to mounts just below the watchroom. This additional support, however, was not effective as the wires on which the sun shone would expand while those in shade on the opposite side of the tower would contract causing the tower to lean. The turnbuckles were adjusted to allow for the contraction and expansion of the support cables, but the tower then started to shudder once again.

Notwithstanding its issues, Sturgeon Bay Ship Canal Lighthouse became officially operational on March 17, 1899 with its third-order Fresnel lens producing alternating red and white flashes at a focal plane of 107 feet above lake level. The light was designed to be seen up to a distance of eighteen and a half miles, though there were reports that the flashing signal could, at times, be seen up to fifty miles away.

The lighthouse was originally painted a reddish-brown with a black lantern, but mariners complained that this coloring blended with the surrounding trees making it often easier in daylight to spot the white keepers dwelling before the tower. In August 1900, the tower was painted a brilliant white to provide a better daymark, and that year, a new dwelling was built for an assistant keeper, as there were now four assistants and a head keeper assigned to the station to care for the pierhead and coastal light. In 1904, the main dwelling was remodeled to provide room for three keepers.

Lighthouse engineers raised the upper end of the guy wires to mounts on the watchroom, but when this failed to halt the vibrations, six lengthy support braces were ordered for the tower. The skeletal steel framework that surrounds the tower today was put in place in 1903 to support the watchroom and lantern, leaving the original cylindrical tower to support only the spiral staircase inside it. A similarly designed tower, erected on Devils Island in 1898, also had to have supporting braces installed to eliminate a vibration problem.

Charles Chapman was appointed assistant keeper at the Canal Station in 1884, when a fog signal was established near the Pierhead Lighthouse. The stations first head keeper, Rufus M. Wright, was removed two years later, and Chapman was promoted to that position. Keeper Chapman served as keeper of the Canal Station, where he and his assistants were responsible for two lighthouses, a fog signal, and some minor canal beacons, until his passing in 1910. At that time, Chapmans son, Claude, was serving as the stations third assistant keeper. Claude Chapman was promoted to second assistant following the death of this father, and nine years later, was made first assistant.

In 1925, Claude Chapman became head keeper of Chambers Island Lighthouse, a position he held until he was transferred back to the Canal Station in 1933 to become its head keeper. Just five months after returning to his childhood home, he was killed in a tragic accident. The government dredge Kewaunee and the tugboat Marinette were tied up in the harbor at the station on November 4, 1933. Palmer La Plante, captain of the tug, and Chapman went out duck hunting that morning, and when they returned, Keeper Chapman went aboard the Kewaunee to talk with its engineer. As La Plante was unloading his twelve-gauge shotgun nearby, it accidentally discharged striking Chapman in the back and killing him instantly.

John Trucker was appointed the next head keeper of the Canal Station, transferring back to the station from Grosse Point Lighthouse in Illinois. Keeper Trucker was only five feet six inches tall and was known as quiet man. The Bible was often his only companion as he stood watch atop the tower, and he managed to read it from cover to cover seven times. Trucker was an adept woodcarver, and in winter applied this skill to snow, creating a giant horse and a dog that were large enough for his grandchildren to ride on.

In March 2016, the Coast Guard issued a news release requesting public comment on its plans to demolish the unoccupied 1896 keepers dwelling that was enlarged in 1904. The Coast Guard deems the housing substandard and unlivable due to lead-based paint and asbestos in the plaster. While the Coast Guard claims the proposed demolition will not adversely affect the nearby historic structure, the Sturgeon Bay Canal Lighthouse, it certainly will subtract from the beauty and history of the station.

For a larger map of Sturgeon Bay Ship Canal Lighthouse, click the lighthouse in the above map.

On Highway 42, just north of where it crosses Sturgeon Bay, turn east on Utah Street, right on Cove Road, then left onto Canal Drive. Follow Canal Drive 2.7 miles to the Coast Guard Station. Park near the entrance to the Coast Guard station and then follow the paved road into the station where you can see the lighthouse.

As visitors are restricted to the station's road, it is difficult to get a great picture of Sturgeon Bay Ship Canal Lighthouse.