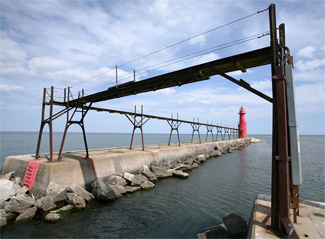 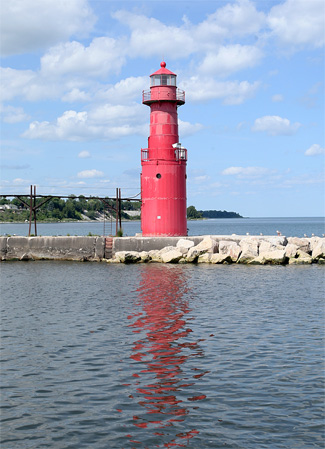 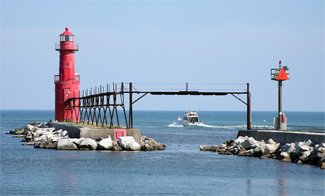 Algoma was settled by English and Irish pioneers in 1851 and was originally known as Wolf River. Pottawatomie Indians called the place An-Ne-Pe, meaning land of the great gray wolf, and the village eventually became known as Ahnapee. In early October 1871, a great fire, known as the Peshtigo Fire, destroyed the town of Peshtigo, Wisconsin, then skipped over the waters of Green Bay and swept across the Door Peninsula. (Many fires occurred in Wisconsin, Illinois and Michigan over the same few days, fanned by a strong storm system and fueled by plenty of timber from a dry summer. This was when the Great Chicago Fire occurred and when Holland, Manistee, and Port Huron, Michigan also burned.) As the flames approached Ahnapee, its residents waited anxiously beside boats loaded with their valuables, ready to escape into Lake Michigan, but torrential rains doused the fire just in time to save Ahnapee. A few years later, the city was renamed Algoma, another Native American word, which means park of flowers.

A project was adopted in 1875 to create a small artificial harbor at Algoma through the construction of parallel piers. Prior to this improvement, the depth of water at the mouth of the Ahnapee River was just three feet and greatly restricted commercial use of the river. Work on increasing the width of the harbors entrance from 100 feet to 200 feet by making an offset in each pier commenced in 1884. Under an act approved by Congress in 1907, a small outer harbor, enclosed by a pier and breakwater and large enough to permit turning a vessel, was constructed.

The Lighthouse Board noted in 1890 that city authorities had maintained their own light at Algoma for several years but felt that the quantity of commerce at the harbor now merited a regularly established and maintained light. The Board requested $2,500 for the construction of a pierhead tower and a post light to function as range lights on Algomas northern pier. Congress funded the project in March 1891, and the range structures were ready to be placed in operation during the summer of 1892, but the illuminating apparatus had not yet arrived.

A lens lantern for the tower and a tubular lantern for the post light were finally put in place and tested on December 23, and the range lights went into service on March 1, 1893. The lower portion of the rear tower was open framework, while the upper portion, below the hexagonal lantern room, was enclosed. The tower was sixteen feet square at the base, tapered to ten-and-a-half feet at the lantern room, and was bolted to the wooden pier substructure. The tower measured thirty-five feet from base to ventilator ball, and its light had a focal plane of thirty-seven feet. The post light had a focal plane of twenty-two feet. Ole Hansen was transferred in from Chicago Harbor Lighthouse to be the first keeper at Algoma.

A bridge with stairs at each end was built to link the main north pier and the detached outer pier in 1892, and in 1895 a fifth-order lens took the place of the lens lantern. A red chimney was used on the lamp inside the Fresnel lens to produce a fixed red light. The bridge was abandoned in 1900, after over 300 feet of elevated walkway were installed on the pier and detached pier to permit the keeper to access the lights in any weather conditions.

In 1901, Keeper Gustavus Umberham transferred to Algoma from Michigans Cedar River Lighthouse with his five children, his wife having passed away at Cedar River. Umberham met and married Anna Meunier in Algoma, and they had two more children. One of these two children was Cora, who in 2008 still vividly remembered the night of February 3, 1913 when three men knocked on her familys door with a message that destroyed the happy home she had known as a lighthouse keepers daughter.

Gus Umberham had left early that day with his friend Billy Adamson for Kewaunee, so Adamson could register his boat the Reliance. Two other men had gone along for the ride, and the boat was just six miles from returning safely to Algoma, when the wind picked up. The window in the bow of the boat had frosted over, so one man watched the lights along the shore while another steered the boat.

After having stood his watch, it was Umberhams turn to warm himself inside the cabin before relieving Adamson at the Helm. As Gus made his way forward, a heavy swell struck the boat, pitching him into the cabins door and then overboard. Hearing the noise, the other men quickly discovered what had happened and turned the boat around to search for their friend. After spending an hour circling and occasionally killing the engine to listen for any sign of their friend, the heartbroken trio returned to Algoma and trudged up the hill to break the news to Umberhams family.

Beginning in 1901, the Lighthouse Board made an annual request for $3,500 for building a keepers dwelling at Algoma, noting that the pier was on the opposite side of the river from any available dwelling and that the keeper should reside sufficiently near the lights to give them proper care. Congress finally provided the necessary funds through acts in March 1907 and May 1908. A lot for the keepers dwelling was purchased on July 9, 1908, and upon this a red brick, six-room dwelling with green shingles on its second story and gables was constructed during May and June of 1909.

On April 10, 1910, an electrically operated siren fog signal was established in the wooden tower on the pier. The engine for generating the electricity was supplied by Fairbanks, Morse, & Co. of Chicago, and the siren sounded a ten-second blast followed by ten seconds of silence when needed. Just days after the fog signal was put into operation, Louis Braemer was hired as the stations first assistant keeper. Not wanting to leave Algoma, Braemer never applied for a promotion and served as an assistant at Algoma for at least thirty years.

According to the Great Lakes Pilot for 1921, the front light was still fixed red and shown from a red post. The rear light was also still fixed red, but it was now displayed from a red square pyramidal tower, indicating the wooden tower was painted red sometime before 1921.

Carl J. Graan was transferred to Algoma as head keeper in 1923, and would hold that position longer than any other man. To placate residents annoyed by the stations fog signal, Graan devised a curved, metal-lined device that when placed around the fog trumpet, reflected most of the sound seaward. Graan received a commendation from the government for his invention, and similar reflectors were installed at other stations. The Graans had nine children, three of whom were born at the keepers dwelling in Algoma. Graans service ended in 1944, when he died of a heart attack.

The current red, steel lighthouse was relocated to Algoma in 1932 as part of a $100,000 harbor improvement project that included capping the north and south piers with concrete. The new tower was equipped with a diaphone fog signal, operated by remote control. The lighthouse was automated in 1973.

In May 2014, Algoma Pierhead Lighthouse, deemed excess by the Coast Guard, was made available under the guidelines of the National Historic Lighthouse Preservation Act to eligible entities defined as Federal Agencies, state and local agencies, non-profit corporations, educational agencies, or community development organizations, for education, park, recreation, cultural, or historic preservation purposes. In preparation for disposal of the lighthouse, the Coast Guard hired contractors at a cost of nearly $200,000 to replace the tower's foundation and windows and paint the lighthouse and attached catwalk. The work was carried out in June 2014.

The City of Algoma heard from the National Park Service in early 2015 that it was the sole applicant for the lighthouse and would likely be awarded the property.

In 2019, the Coast Guard removed the historic Fresnel lens from the tower and replaced it with an LED beacon. After being restored, the Fresnel lens was placed on exhibit at Milwaukees North Point Lighthouse.

For a larger map of Algoma Pierhead Lighthouse, click the lighthouse in the above map.

From Highway 42 in Algoma, go east on Fremont Street. Take a left onto Lake Street, where you can park and view the light at the end of the two-piece pier from across Ahnapee River. You can walk the piers on either side of the river to get close to the lighthouse, but as the tower is located on a detached breakwater you can not get right up to it.

The lighthouse is owned by the City of Algoma. Grounds open, tower closed.