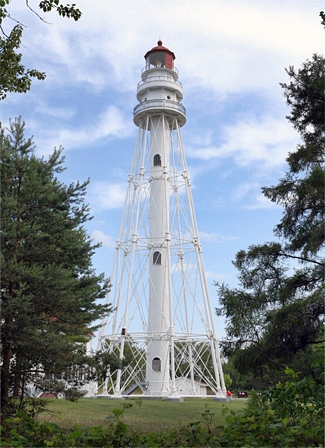 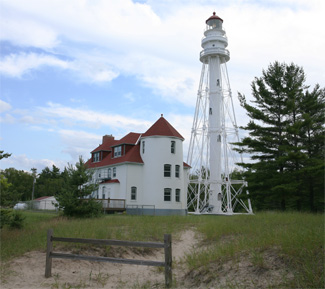 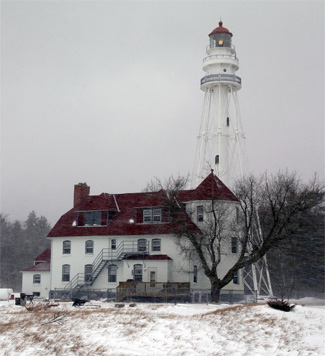 The Lighthouse Board noted in 1870 that Twin River Point, located a few miles northeast of Two Rivers, Wisconsin, occupied a position on the west coast of Lake Michigan similar to Big Sable Point on the lakes east coast. If you look at a map of Lake Michigan, you will see that these two bumps in the shoreline are located roughly straight across the lake from each other. The hazard that Twin River Point and the shallow waters offshore presented to mariners was evidenced by the numerous shipwrecks that occurred there in the 1860s. Big Sable Point had been marked by a lighthouse in 1867, and the Lighthouse Board felt that Twin River Point should be marked by a tower 100 feet high, with an apparatus of the third order. The government owned land in the village of Two Rivers on which a lighthouse had been in operation from 1853 to 1859, but this site was considered too far south for a lighthouse to serve as a coast light and mark Twin River Point.

Peter Rowley established a trading post at Twin River Point in 1835, and in 1841 surveyors named the area Rowley Point in his honor. This name was later changed to Rawley Point, a name that endures to this day. For some reason, Lighthouse Board records refer to the point almost exclusively as Twin River Point, though in 1888, it was listed as Twin River Point, on Rawleys Point. Since 1956, the Coast Guard has referred to the lighthouse as Rawley Point Light.

The Lighthouse Boards repeated requests in 1871 and 1872 for funding for Twin River Point Lighthouse were finally answered with a $40,000 appropriation on March 3, 1873, and construction of the lighthouse began the following August. Progress was slow due to difficulty in landing materials and quicksand encountered while digging the foundations. By the time work for the year was suspended on November 7, a sturdy base for the towers limestone foundation stones had been established by driving a network of wooden pilings into the sand and then topping them by a grillage of cross timbers and a cement cap.

Work resumed on April 23, 1874, and by the end of June, the tower had risen nineteen feet above the water table, its first landing and stairs had been set, the dwellings walls were finished, and the dwellings roof had been shingled. The tower and dwelling were completed in October, but due to the late arrival of the stations third-order Fresnel lens, the inaugural lighting was delayed until December 7, 1874.

The whitewashed tower and dwelling were connected by a covered passageway, built of brick. The floor plan of the dwelling, signed by Orlando M. Poe, Chief Engineer of the 11th Lighthouse District, shows that the dwelling, as originally configured, had a kitchen, bedroom, and living room on the ground floor, and four bedrooms on the second floor. The brick tower measured 100 feet from base to focal plane.

After Twin River Point Lighthouse had been in operation for more than a decade, it became evident to the Lighthouse Board that a fog whistle should be established on the projecting headland at Rawley Point. An act approved on March 2, 1889 made provision for a steam fog signal. The necessary machinery, engines, and boilers were built under contract and delivered to the lighthouse depot at Detroit, while the materials for the fog signal building were purchased and delivered to the depot after advertisement by posters and circular letters. The steam barge Ruby transported all the material from Detroit to Rawley Point in July 1890, and the fog signal commenced operation on October 10 of that year. A two-foot-wide sidewalk ran nearly three hundred feet from the dwelling to the fog signal, located roughly thirty feet from the shore. During its first ten months, the fog signal was in operation 521 hours and consumed five tons of coal and ninety-six cords of wood.

While the station had a new fog signal, its light tower, due to defective brick used in its construction, was in poor condition. Plans for banding and staying the structure were considered, and in its 1892 Annual Report the Lighthouse Board simply stated, the tower was strengthened. The same report noted that a barn had been built, sidewalks were relaid, and a fence had been placed around the tower and dwelling to enclose the yard, which had been sown with grass seed. After the necessary materials were delivered by the lighthouse tender Amaranth, a circular iron oil house was erected 105 feet southwest of the tower in 1892.

Keeper Andrew J. Allen, who was in charge of the station from 1889 to 1895, wrote the district inspector in 1892 announcing that his assistant had quit. Mr. John. F. Craig quite [quit] this amon account him and me could not get alonghe would not obey my orders or take my advice. After settling at the station, Craig telegraphed for his wife in Kansas to join him. After she arrived, Keeper Allen noted, her mail came by the name of Carrie Spencer. Last evening, Keeper Allen continued, they commenced to dance jigs and started the plaster and when ordered to Stop they said they would do just as they please, but I stoped them. This morning I asked him to explain there conduct & character and he said he would quite [quit] and I told him the quicker the better because I could not allow such doings. When he first came he wanted to gamble with cards but I would not have it done so long as I am Keeper.

The efforts to strengthen the tower proved ineffective, as the Lighthouse Board noted in 1894 that since the tower at Rawley Point continued to crack and crumble, plans were being made to relocate the metal tower from the discontinued Chicago River Lightstation, increase its height, and re-erect it a Rawley Point. A contract was made for providing the additional metalwork required, and the material for constructing a foundation for the new tower was delivered at the station in 1894. That September, excavations for the foundations for the eight support columns were made, concrete piers were poured, the foundation disks and cylinders bases were set, and the first section of the tower was erected just west of the dwelling. In October, 166,000 pounds of metalwork had been erected, completing the fourth story and bringing the structure up to the main gallery deck. The main deck, service room, watchroom, and lantern were completed in November, and the illuminating apparatus was transferred from the old brick tower to the iron tower on November 20, 1894. The new skeleton iron tower, which stands 113 feet tall, is the tallest land-based lighthouse on the Great Lakes.

Plans for removing the old brick tower and making additions to the keepers dwelling were drawn up in January 1895. The material for this work was landed by the tender Amaranth, and a work party arrived at Rawley Point on April 10, 1895. The tower was taken down to the level of the dwellings roofline, and the covered passageway that linked the dwelling to the tower was replaced by a new two-story section of dwelling. At the same time, the boat landing was extended eighty-four feet, and the oil house was moved to a line with the iron tower. A brick oil house was built at the station in 1903.

In 1904, the clockwork mechanism for revolving the third-order lens was removed from the tower and taken to the district machine shop in Milwaukee, where it was thoroughly overhauled before being shipped back to Rawley Point. In the interim, the characteristic of the light was temporarily changed from fixed white, varied by a white flash every thirty seconds, to a fixed white light.

A brick cistern was constructed on the east side of the dwelling in 1906, and a well was drilled to a depth of 103 feet to serve as a water supply for the station. The worn-out steam fog signal was replaced by oil-engine-driven air compressors and a type G diaphone that commenced operation on September 23, 1919. The illuminant used at the lighthouse was changed to electricity in 1930, increasing the intensity of the light to 240,000 candlepower.

Bird strikes were not uncommon experiences at lighthouses, and Keeper Everitt Sterritt reported one that occurred at Twin River Point in 1917 to his superiors:

I very respectfully wish to inform you that at 4:50 this a.m., during a severe rainstorm, with a northeast wind blowing from 40 to 50 miles per hour, one of a flock of wild geese in passing by, going south, struck the second panel of plate glass to the north from the blank panel and made a hole in the plate glass about 14 inches in diameter, and fell to the bottom of the tower outside with three others, and one passed through and fell down in the clock room.

I at once placed boards 3 feet by 3 feet 3 inches on the outside, which shuts off the light on the upper half of that panel, and as soon as the wind goes down so we can work up there I will place in a new plate glass.

A reporter provided the following insight into how the lighthouse was accessed in 1931:

During the summer the families at the lighthouse are far from lonely for each Sunday there are approximately 25 cars of campers on the grounds around the lighthouse. To reach this place, however, it is necessary to drive through two miles of road which stretches like a pale ribbon across a swamp whose waters at times flank both sides of the dirt road and ruts are so deep that it is useless to try to steer a vehicle. Near the beacon, jagged patches of scrub juniper stab their way into the rolling expanses of sand dunes and vines running into tiny groves of trees form soft carpets for picnickers. During the three months of winter and spring it is impossible to leave the lighthouse as the swamp covers the road and drifts of snow hide treacherous spots so that it is even dangerous to attempt to cross.

In 1936, the Bureau of Lighthouses declared a large portion of the Twin River Point Lighthouse Reservation surplus, and the following year Wisconsins State Conservation Commission acquired 73.44 acres of the reservation to create the nucleus of a new park. To this tract, 400 acres to the north and 400 to the south were soon added, and today Point Beach State Forest covers 3,000 acres of land, has six miles of sandy beaches, and offers family campsites and two large group cabins.

The towers third-order Fresnel lens was removed in 1952, after one of its prisms was damaged, and twin DCB-36 aerobeacons were installed. A New Years Eve fire in 1962 caused major damage to the newer portion of the keepers dwelling. One Coast Guardsman was severely burned, and the three families living there were forced to evacuate.

Rawley Point Lighthouse was staffed until 1979, when the station became fully automated. The present optic was installed in 1987. The keepers dwelling at Rawley Point is currently used as a rental cottage for Coast Guard personnel.

For a larger map of Rawley Point (Twin River) Lighthouse, click the lighthouse in the above map.

From Two Rivers Pierhead lighthouse, take Jackson Street north to 22nd Street. Turn right on 22nd Street and after five blocks turn left on Sandy Bay Road also known as Highway O. Follow the road for 4.6 miles then turn right into Point Beach State Forest, where you will need to pay an entrance fee before getting a view of Rawley Point Lighthouse. The lighthouse is used as a vacation cottage for military personnel, active or retired, but you can view the tower from Point Beach.

The lighthouse is owned by the Coast Guard. Nearby grounds open, dwelling/tower closed.