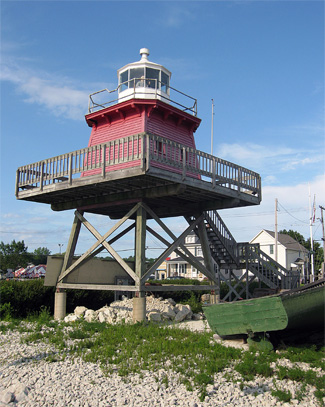 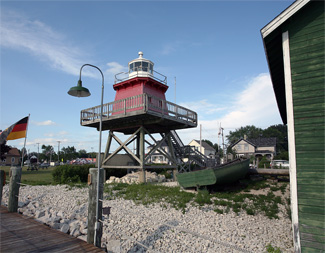 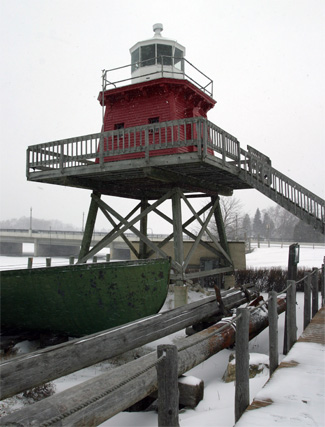 The City of Two Rivers is named for the East and West Twin Rivers, which run together just before flowing into Lake Michigan. After having been appointed by the Board of Navy Commissioners to examine and select lighthouse sites on the Great Lakes, Lieutenant G.J. Pendergrast toured the lakes in 1837 and submitted a lengthy report detailing his findings. Pendergrast wrote that while he had not landed at Two Rivers he passed close enough to determine the stream entering the lake there we quite large, and doubtless might be used in forming a harbor.

On September 28, 1850, Congress appropriated $3,500 for a lighthouse at the mouth of Twin Rivers. Henry B. Miller, Superintendent and Inspector of Lights on the Great Lakes, informed Wisconsin Governor Leonard J. Farwell in early 1852 that his legislature needed to pass an act of cession of jurisdiction for lighthouse property at Two Rivers before the appropriated funds could be drawn upon.

A deed for property in Two Rivers was obtained in April 1852, and work began on an eighteen by thirty-six foot, one-and-a-half-story brick dwelling, atop which was mounted an octagonal lantern room. The height from the base of the dwelling to the lantern rooms ventilator ball was thirty-five feet, while the fixed white light, originally produced by a single lamp and fourteen-inch reflector, had a focal plane of fifty-two feet above Lake Michigan.

By 1858, a sixth-order Fresnel lens had been placed in the lantern room, but the lights days were numbered. In 1859, Congress empowered the Lighthouse Board to discontinue from time to time such lights as may become useless by reason of mutations of commerce and changes of channels of harbors, and other causes. Twin Rivers Lighthouse was discontinued that August, and Albert Barry, who had been keeper for most of the lights existence, found himself out of a job.

In 1870, engineers with the U.S. Army surveyed Two Rivers and reported that to make use of the river as a harbor it was necessary to widen and deepen the mouth, to revet the sides of the excavation, and extend piers from the shore line into the lake, according to the plan adopted at other harbors on Lake Michigan. At that time there were two tanneries, a chair factory, two sawmills, and a tub factory at Two Rivers, and leather was by far the most lucrative export from two private piers that had been extended into the lake. Leather exports were valued at $975,600, while lumber exports amounted to $220,000. The engineers estimated that extending parallel piers into Lake Michigan to a depth of eighteen feet and dredging a channel to a depth of twelve feet would cost $265,589.

Work on the piers began in 1871, and by 1878, they had been extended 1,200 feet to a depth of twelve feet at a cost of $110,000. As most of the length was built of piles, sand was able to sift through and fill in the dredged channel. A sand-tight lining was fitted to the pile piers in 1879 to eliminate this problem, and over the next several years, additional cribs were added to extend the piers.

While a pierhead light for Two Rivers was authorized in 1879, it was until June 22, 1886 that a contract was entered into for its construction at the extremity of the north pier. A Mr. Boehmer of Manitowoc built the pierhead lighthouse, which was linked to shore by 1,315 feet of elevated walkway. The work was completed on October 14, and the station was lighted for the first time on the night of October 25, 1886 by Keeper Antony Gauthier. The following month, the light and walkway were damaged when a vessel was driven into the pier, prompting immediate repairs.

The square, pyramidal lighthouse measured thirty-five feet from base to ventilator ball and was built with twelve-inch-square corner posts and sills. The bottom portion of the tower was open framework, while the upper portion had an enclosed watchroom accessed from the elevated walkway. A trap door led from the watchroom up into the ten-sided lantern, from which a red light was displayed from a sixth-order, Sautter &Co. Fresnel lens.

The 1903 Report of the Lighthouse Board noted that there was no dwelling associated with Two Rivers Lighthouse and recommended $3,500 be appropriated to construct one on the land where Twin Rivers Lighthouse once stood. The Board repeated its request for funds each year until an act on February 25, 1907 finally funded the keepers dwelling. Rather than build a new double dwelling, the Lighthouse Board purchased an existing residence and expanded it to create a duplex for two keepers. The work on the new dwelling was finished in September 19018, and a red brick oil house was built near the eleven-room, frame dwelling in 1909.

Also in 1909, a 1,500-pound fog bell was mounted on the seaward side of the pierhead tower, and a Gamewell striking apparatus, wound up intermittently by a quarter-horsepower motor, was installed in the watchroom. A ten by eighteen foot frame powerhouse was constructed at the inner end of the north pier to shelter a generator that powered the motor in the watchroom. The fog bell was struck a single blow every fifteen seconds. To help with the added responsibility of operating the fog bell, Sanford Scott was hired as the stations first assistant keeper in 1909.

This station is now equipped with an electrically operated fog bell and sixth-order lens Illuminated by wick-oil light. For several years past there has been an insistent demand from Two Rivers that the fog signal be improved, owing to the fact that craft operating out of Two Rivers found the bell of little assistance in making the port during fog. As it is necessary to maintain two keepers to operate the bell, the operating expense will be increased but little if an adequate and efficient signal is installed. It is proposed to install a diaphone fog signal and electrically driven compressors (current from city) and provide an oil-engine-driven electric generator for emergency use. Also to install electric light in sixth-order lens in place of oil light.

After repeated requests, a diaphone fog signal was put in place in 1928, and the pierhead light was changed to electric illuminant.

Henry Wierzbach, who served as assistant keeper to Otto Schmiling at Two Rivers during the 1930s, made the local paper in 1935:

Assistant Lighthouse Keeper Henry Wierzbach hereafter will show considerable respect for manhole covers. The other day Hank became irritated over the constant rattling of the cover as the cars passed over it. It disturbed his sleep. He could endure it no longer, so he got out of bed, hurried to the intersection, and gave the heavy cover a lusty kick. The cover fell in place, but it took the lightkeepers big toe along with it. Now Hanks nursing a broken toe.

Two Rivers Lighthouse was deactivated in 1969 and replaced with a modern beacon. In 1975, the upper portion of the wooden lighthouse was moved onto the grounds of the Historic Rogers Street Fishing Village, where it was surrounded by a wide, wooden walkway in 1998. The towers Fresnel lens was broken during the move, and three decades later, Sandy Zipperer, executive director of the museum, launched an effort to have it repaired.

Joseph Cocking of Lighthouse Lamp Shop, Inc. spent over a year researching the lens to determine its exact form, molding the bent metal back into shape, and fabricating the lens pieces that had been broken or lost. The restored lens was unveiled at the museum during a celebration held on May 28, 2009.

For a larger map of Two Rivers Lighthouse, click the lighthouse in the above map.

From Interstate 43 west of Two Rivers, take Exit 154 and travel east into Two Rivers on Highway 130. Highway 130 will become Hawthorne Street. Turn left from Hawthorne Street onto 12th Street, and from 12th Street turn left onto Washington Street. After crossing the West Twin River, turn right on 22nd Street, cross the East Twin River, and then turn right on Jackson Street where you will see Two Rivers Lighthouse and fishing village. Rogers Street Fishing Village is open from Memorial Day through October from 10 a.m. to 4 p.m. on weekdays and noon to 4 p.m. on weekends. A Fresnel lens used in the lighthouse is on display in the museum.

The lighthouse is owned by the Rogers Street Fishing Village. Grounds open, tower open in season.


Two Rivers claims to be the home of the ice cream sundae. A historical sign states:

In 1881, George Hallauer asked Edward C. Berner, the owner of a soda fountain at 1404-15th Street, to top a dish of ice cream with chocolate sauce, hitherto used only for ice cream sodas. The concoction cost a nickel and soon became very popular, but it was sold only on Sundays. One day a ten year old girl insisted she have a dish of ice cream "with that stuff on top," saying they could "pretend it was Sunday." After that, the confection was sold every day in many flavors. It lost its Sunday only association, to be called ICE CREAM SUNDAE when a glassware salesman placed an order with his company for the long canoe-shaped dishes in which it was served, as "Sundae dishes."