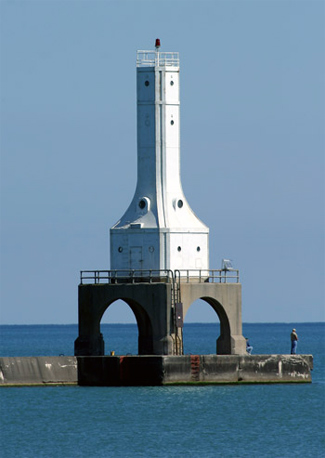 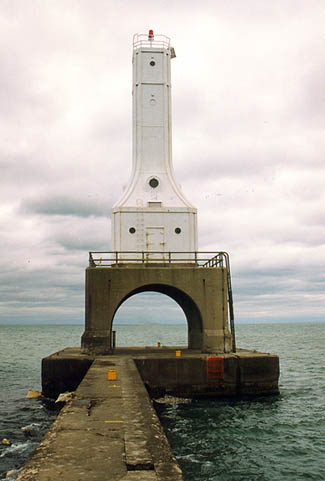 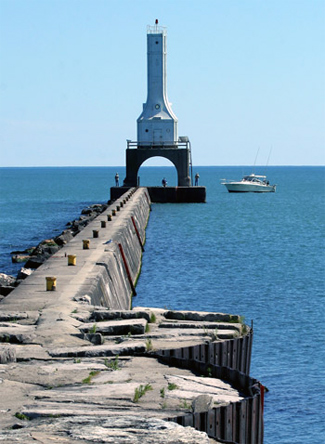 Port Washingtons first lighthouse was built on the citys north bluff, overlooking the harbor, in 1849. This tower, detached from the keepers dwelling, was replaced in 1860 by a square, wooden tower mounted atop a new two-story brick residence for the keeper. A project to improve the harbor at Port Washington was adopted in 1869 and modified two times during the following decade. After much dredging, this work created two interior basins with a combined area of 5 ¾ acres that were connected to Lake Michigan through a channel protected by two piers. When completed in 1888, the north pier was 920 feet long, while the south pier was 1,220 feet long.

The Annual Report of the Lighthouse Board for 1888 contained the following entry for Port Washington:

The north pier of the entrance to this harbor was completed according to the approved project and should now be lighted. The Board recommended that the proper steps be taken to obtain funds for the erection of an open frame-work tower on the outer end of the north pier; that a sixth order red light, illuminating 180 degrees of the horizon, be shown from it; and, to avoid building about 800 feet of elevated walk, that the station be lighted with gasoline. An appropriation of $16,000 has been made to establish this and three other pierhead lights on the lakes. Measures will be taken for the erection of as many as the limited amount appropriated will build.

Bids for constructing the pierhead lighthouse were solicited in the spring of 1889, but being deemed excessive, they were all rejected. Instead, the material and labor were obtained on the open market, and after a gas machine had arrived along with the lantern and glass from the general lighthouse depot on Staten Island, the towers sixth-order light was put in operation on the night of September 15, 1889.

The square, pyramidal tower was built using twelve-inch square posts atop twelve-inch-square sills that had a length of twenty feet The lower portion of the tower was open framework, while the upper portion was enclosed. The white tower measured forty-two feet, eleven inches, from base to ventilator ball, and tapered from sixteen feet square at its base to ten feet square at the lantern. Steps with a railing led to the lower room of the enclosed portion, and from there a mill step ladder led into the watchroom and up into the lantern.

In 1902, the gas machine was removed from the tower and taken to the storehouse in Milwaukee. In place of the gas machine, fifth-order lamps were used in the lens.

In 1931, the Federal Government approved a project for improvements at Port Washington that included the construction of a north breakwater and shore extension, removal of the old north pier, enlarging and deepening the entrance channel and outer turning basin to twenty-one feet, and deepening the inner basins to eighteen feet. At the same time the breakwater was under construction, a coal fired electric generating plant was being built on the south side of the harbor. These two projects helped many local residents find employment during the depths of the Great Depression.

Plans for a light and fog signal to mark the outer end of the northern breakwater were prepared in 1934, and construction of the tower began under contract. The work was completed in 1935 at a cost of around $38,000. The metal, Art Deco tower rests on a twenty-foot-square, cement base that has large arches on each of its faces so it does not obstruct the view of mariners using the harbor. The tower is similar to those built around the same time at Indiana Harbor, Indiana and Huron Harbor, Ohio.

The Lighthouse Service announced the completion of the breakwater light with these words:

[This improvement] marks another step in development of the artificial port known as Port Washington, about 20 miles from Milwaukee, and which has become one of the largest coal-receiving ports on the Lakes. The latest step is the erection of a structure 78 feet in height, equipped with a flashing red light of 18,000 candlepower, visible 11 miles, and supplemented by an air diaphone. At the same port a pierhead light has also been installed, 32 feet in height, and equipped with a 3,000-candlepower fixed red light, visible for 6 miles.

A fourth-order lens housed inside a lantern room with diagonal astragals originally topped the metal tower, but the lantern room has since been removed. A modern tower marks the end of the southern breakwater.

In May 2015, Port Washington Breakwater Lighthouse was declared excess to the needs of the United States Coast Guard and made available to eligible organizations under the provisions of the National Historic Lighthouse Preservation Act of 2000. Qualified entities were given sixty days to submit a letter of interest and were required to obtain authorization from the Corps of Engineers. If no suitable organization is found, the lighthouse will be sold at auction. The City of Port Washington submitted an application for the lighthouse in late 2015.

For a larger map of Port Washington Breakwater Lighthouse, click the lighthouse in the above map.

From Interstate 43 west of Port Washington, take Exit 96 and travel east on Highway 33 for 3 miles. The road will become Grand Avenue along the way. Turn left on Franklin Street and then make a right onto Jackson Street. The breakwater starts near the end of Jackson Street.