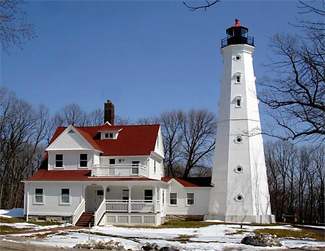 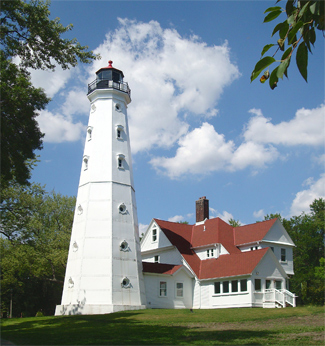 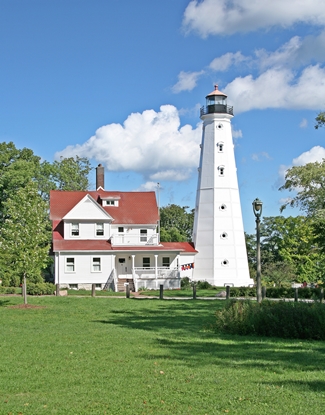 Milwaukee had but ten residents in 1835, but over the next year, land speculators flocked in, and the population rose to 400. These early settlers petitioned Congress for needed improvements, and $400 was appropriated in 1836 for a survey to determine the practicability of creating a harbor there. Situated where the Milwaukee, Menomonee, and Kinnicknnick Rivers merge before emptying into Lake Michigan, Milwaukee was judged one of the most natural places for a harbor on the Great Lakes. On March 3, 1837, Congress appropriated $5,000 for building a lighthouse at the mouth of the Milwaukee River. G. J. Pendergrast was appointed by the Board of Navy Commissioners to examine and select sites for lighthouses on the Great Lakes during the summer of 1837, and he wrote the following after visiting Milwaukee:

The town at this place was commenced only about three years since, and it now contains upwards of two thousand inhabitants. The commerce of Milwaukie [sic] is very considerable, and a light-house and harbor is much wanted. The first they will soon have, but it will be of little advantage unless they can get a harbor also. The river is large enough for all purposes, and ought certainly to be improved so as to permit vessels of all sizes to enter it.

A contract for the lighthouse at Milwaukee was awarded in early 1838 with the expectation that it be completed by October 15. When James Homans inspected the lighthouse that summer he found the light-house and tenement were well put up, with good brick. While he approved of the workmanship, he had serious objections to the lighthouses location. [The site] must have been chosen by some one little acquainted with navigation, Homans wrote, and has been apparently located to gratify some of the townspeople, at the termination of the one of the streets, near the bank of the lake, where it forms an object of interest, from its neat appearance when viewed from other parts of the village. For purposes of practical utility to those engaged in the commercial business of the lakes, this site is about the worst that could have been taken.

G. J. Pendergrast had recommended a site at the mouth of the river, but the lighthouse had been erected about a mile to the north. The lighthouse commenced operation in 1839, after the delayed arrival from the east of the large stone platform and ironwork for the top of the tower. The first lantern room intended for use at Milwaukee had to be thrown overboard, along with $20,000 of other cargo, when the steamer De Witt Clinton struck a shoal near Beaver Island in September 1837. Seven patent Lewis lamps, set in fourteen-inch reflectors, were used in the thirty-foot-tall tower.

Eli Bates, a former school teacher, was the first keeper of the lighthouse, and he supplemented his $300 annual salary by running a gingerbread and small beer stand in part of the whitewashed brick keepers dwelling. Early Milwaukeeans quipped that the seven lanterns which hung in the lantern house were not all that was lit nightly, for cork legged Eli Bates, the keeper, had always a table or two of the gayest young blades in town playing cards and bending elbows until the dawn.

Soon after the establishment of the Lighthouse Board, $5,000 was allocated on August 31, 1852 to correct the problem of the misplaced lighthouse at Milwaukee. A site for a new lighthouse was selected on North Point, a headland at the northern end of Milwaukee Bay. After two-acres were finally acquired from Henry C. Bonesteel for $1,000, a contract for the lighthouse was awarded in 1854, and the structure was completed in 1855. The tower, a cylinder with a diameter of six-and-a-half feet, was built with cream city brick and stood twenty-two feet tall. A fourth-order Fresnel lens, manufactured by Barbier, Benard & Turenne of Paris, was used inside the towers ten-sided lantern room to produce a fixed white light varied by a flash every two minutes. Thanks to the bluff on which the lighthouse stood, it had a focal plane of 102 feet. A six-room, brick, one-and-a-half-story dwelling was attached to the landward-side of the tower.

In 1868, North Point Lighthouse was raised four feet and equipped with a new lantern and fourth-order Fresnel lens.

The Lighthouse Board noted in 1885 that the bank in front of the lighthouse was being lost to erosion and so endangered the lighthouse that it was inadvisable to make further repairs as a new tower and dwelling, built farther inland, were needed. An appropriation of $15,000 was requested for a new lighthouse, and the following spring a slide carried about twenty feet of the lighthouse lot into the lake and brought the edge of the bank to within eight feet of the tower. Congress wisely provided the $15,000 on August 4, 1886, and the following summer work commenced on a new station at the western limit of the lighthouse lot. The replacement buildings consisted of a brick oil house and an octagonal iron tower, lined with brick and attached by a covered way to a two-story, frame dwelling. Construction was completed on December 20, 1887, and the Fresnel lens from the former lighthouse commenced operation in the new tower on January 10, 1888. An additional flash pattern was fitted to the lens in December of 1892, and the lights characteristic was changed to fixed white varied by a white flash every forty-five seconds. In 1897, the speed of rotation of the lens was increased to produce a white flash every thirty seconds.

In 1893, the City of Milwaukee started to develop Lake Park around North Point Lighthouse. The federal government approved the plans for the park and allowed a carriage road and two bridges to be built just east of the lighthouse, but a decade later, it was impossible to see the light from the north due to the growth of trees in the park. A breakwater was under construction in Milwaukee Bay in 1902, and the Lighthouse Board suggested that if a third-order light was established on it at a height of 105 feet above Lake Michigan, North Point Lighthouse could be discontinued. As required by an act approved by Congress on February 26, 1907, North Point Lighthouse was discontinued on July 1, 1907.

The discontinuance of the light caused much dissatisfaction as it was critical for vessels making Milwaukee from the North. The city of Milwaukee and commercial bodies in the city financed the re-establishment of the light, and in 1908 the officers of the Ninth Lighthouse District recommended that Congress appropriate $10,000 to raise the focal plane of North Point Lighthouse.

On March 4, 1909, a $10,000 appropriation was made to reestablish the station and increase the height of the tower by thirty feet, but the bids for the work made it evident that this sum was insufficient. The bids were therefore rejected, and the Lighthouse Board instead approved a plan to use the $10,000 to move the existing tower 3,000 feet to the northeast. Before making the move, it was decided to wait and see how a new light vessel, placed in service off Milwaukee Harbor during the second half of 1911, performed.

In 1912, a contract for increasing the height of the tower was awarded, and the light at its new height went into operation on December 15, 1912, after roughly $9,500 had been spent. A temporary tower was used for displaying the light while the octagonal iron tower was taken down and a new octagonal steel subtower was erected on a concrete foundation built around the original foundation. The old iron tower was then placed atop the steel subtower to create a new lighthouse with a focal plane of 154 feet. The light was fueled with coal gas from the gas mains of Milwaukee starting on July 1, 1913, and continued so until the illuminant was changed to electricity in 1929.

North Point Lighthouse was automated in 1943, but Coast Guard personnel continued to live at the station until 1994, when the fourth-order lens was removed from the tower and the station was discontinued. The lighthouse and keepers dwelling, which had been placed on the National Register of Historic Places in 1984, were leased to Water Tower Preservation Fund Inc. in 1999, and fundraising efforts were launched to restore the structures. North Point Lighthouse Friends, Inc. was incorporated on January 15, 2002 to focus on restoring the lighthouse and obtained $980,000 in Transportation Enhancement Funding that year to help with restoration costs. In 2003, the lighthouse was transferred to Milwaukee County, who then leased the property to North Point Lighthouse Friends. Restoration of the tower was completed in 2006, and the dwelling was restored the following year. The Fresnel lens removed from the tower in 1994 was returned to the station on May 20, 2009 and now revolves in a display case in the keepers dwelling. Also in the display case is a sixth-order Fresnel lens that served in the 1866 North Cut Beacon at the entrance to Milwaukee Harbor.

For a larger map of North Point Lighthouse, click the lighthouse in the above map.

From Interstate 43 in Milwaukee, go east on Interstate 794. Take the Lincoln Memorial Drive exit and go north on Lincoln Memorial Drive for 2.2 miles. Turn left opposite McKinley Park Beach and drive up the hill on E. Water Tower Road. Turn right on Terrace Avenue and make a quick right onto Wahl Avenue. North Point Lighthouse will be on your right after about half a mile, near the southern end of Lake Park. The lighthouse is open from 1 p.m. to 4 p.m. on weekends. Call (414) 332-6754 for hours on holiday weekends.


A Fresnel lens used in the original lighthouse at Milwaukee is in possession of the Milwaukee County Historical Society.