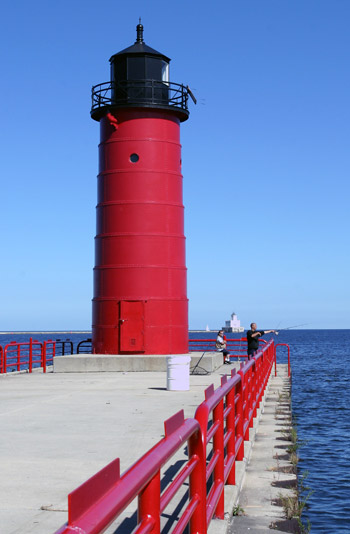 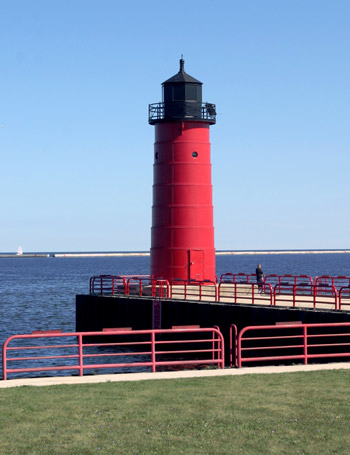 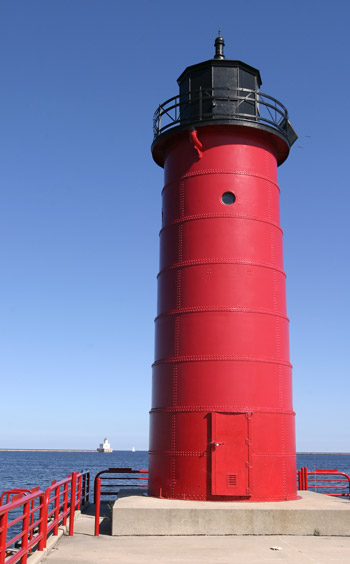 Milwaukee is situated along a natural indentation on the western shore of Lake Michigan, where the Milwaukee, Menomonee, and Kinnickinnic Rivers merge before flowing into the lake. The citys first lighthouse was built on a bluff about a mile north of the rivers mouth in 1838, but it was replaced by a lighthouse on North Point in 1855.

The sum of $500 was allocated in 1848 for a bug light on the government pier at Milwaukee, and a steamer lens was soon placed on the outer end of the pier at the mouth of the river for a cost of $195.66.

In 1852, the federal government appropriated $15,000 to improve the harbor at Milwaukee, and the following year, the citizens of the city voted to loan $50,000 for the project. A new entrance to the river, known as North Cut or Straight Cut was developed a half-mile north of the natural mouth of the river, and in its twenty-third session, Congress appropriated $1,000 for a small beacon light to mark the cut. The piers at North Cut were completed in 1858, and an inspection report that year described a twenty-foot-tall wooden frame tower that was six feet seven inches by eight feet at its base and six feet seven inches square at its lantern. The tower displayed a fixed white light focused by a sixth-order Fresnel lens.

In 1860, after a memorial from shippers, navigators, and others calling for an improved lighthouse at North Cut had been presented to the Committee of Commerce, Captain Raphael Seemes, secretary of the Lighthouse Board, communicated the boards view on the need for a new light.

The present light is so low that it was found necessary to change its color to red, to prevent its being confounded with ships and other lights. This necessarily impaired its efficiency. Still, it would probably answer all necessary purposes if it were at all times accessible to the keeper, which is not the case. The light stands on the end of a pier projecting some two hundred feet into the lake. The pier is only six feet above the surface of the water, and in heavy gales the sea breaks over it waist deep, rendering it impossible for the keeper to pass to or from his light. There is not sufficient room on the end of the pier to admit of a dwelling for the keeper being placed there; and if there were, it would be too unsafe to require him to live in it.

From what has been said, it will be seen that it is precisely at those times when the light is most wanted, viz: in stormy weather, when vessels are running for shelter, that it is least to be depended upon. The only remedy which suggests itself is to construct a detached pier or block sufficiently large to receive a new light-house, with keepers dwelling attached, which would probably cost about fifty thousand dollars, which the board respectfully recommends.

Difficulty in obtaining sufficient timber prevented work on the lighthouse pier in 1862, 1863, and 1864, but construction finally commenced in 1865, following the Civil War, and a new light, known as North Cut Beacon, was exhibited on September 1, 1866. The lighthouse pier measured ninety-three by one hundred and three feet and supported a two-story brick dwelling for the keeper that was attached to a tower for displaying the light.

In 1868, work commenced on extending each of the two piers at North Cut seaward. Once the piers were completed, construction of a new tower on the outer end of the north pier commenced in August 1872. The light from this tower, which stood thirty-two feet tall and was an open frame at its base but enclosed at the top, was first exhibited on October 30. An elevated walkway, which was 600-feet long and linked the tower to the dwelling on the lighthouse pier, was finished in November. This new tower was twelve-foot-square at the base and tapered to eight-foot-square at its lantern room, which housed a sixth-order Fresnel lens that displayed a fixed red light.

The Lighthouse Board requested $5,000 in 1876 for a fog signal at the pierhead station, and a steam fog whistle commenced operation on the pier in early 1878. A duplicate whistle was added in 1880. The stations whistle was in operation around 1,000 hours each year during the 1880s.

In 1888, the superstructure of the cribwork pier on which the keepers dwelling stood was rebuilt and a picket fence, 246 feet in length and three feet high, was built along three of its sides to protect the occupants of the dwelling from falling overboard.

The keepers dwelling was remodeled in 1899 so that the assistant keeper could have private access to the second story, which had four rooms. Gables were placed in each side of the dwellings roof, and the iron lantern room was removed from the attached tower and the tower walls were taken down to be flush with the top of the dwelling. The towers iron stairs were replaced with a hardwood staircase, and a front door was added to the tower to serve as the entrance to the assistant keepers quarters.

A new fog signal house was finished in early 1904 to replace the two old wooden signal houses. The old boilers were transferred to the new building, but new Crosby automatic engines were supplied.

While the fog signal was located on the breakwater, Assistant Keeper William Foster had a harrowing experience when a fierce windstorm whipped up Lake Michigan in late November 1905. His account of the incident follows:

Because I saw that the sea was going to be bad, I went off to the breakwater about 2 oclock in the afternoon, although my time to go on duty was not until 6 oclock. From that time on the sea steadily became worse. In all my experience on the lakes  fifteen years  I never saw the like before. About 5 oclock the sea began breaking over the house and the thunder of the waves was something awful.

It was about 7:30, when I stood at the east window looking out on the lake, I saw a particularly large wave coming, which I realized was certain to hit the house. Involuntarily I grasped the stanchion, and it is to that act that I owe my life. The wave struck the house with full force, breaking in the entire east wall, carrying away with it all the windows and doors and bursting open the door on the west side. I was carried along with the wave out of doors, and it was only the beam I clung to that stayed my progress, and thus saved me from being swept away.

After gathering himself, Keeper Foster signaled the lifesaving crew that he wished to be taken off the breakwater, but it was only after great difficult that this task was accomplished. Before he got away, the fog signal building had been partially turned around, the boilers had been shifted, and many of the connecting pipes broken. The fog signal was out of commission from November 27 to November 30.

The outer or front light, the one that marks the pier today, is a cylindrical steel tower, that measures forty-two feet seven inches from base to ventilator ball. The tower has a diameter of twelve-and-a-half feet at its base and tapers slightly as it rises. Five porthole windows circle the upper portion of the tower, which was originally painted light grey. The lantern room was originally circular with helical bars and housed a fourth-order Fresnel lens, manufactured by L. Sautter, that had three light panels and one reflector panel. The tower could be accessed from the dwelling through a tunnel in the concrete superstructure of the pier.

The rear pierhead range light stood 500 feet west of the front light and consisted of a steel, skeleton tower, twelve feet square at its base, that exhibited a light at a height of fifty-six feet above the pier. A lens lantern was hoisted to the top of the tower from a small, wooden house located eighteen feet from the base of the tower. Both range lights were fixed red. The color of the towers used to display the pierhead range lights was changed to red in 1917. A flashing red acetylene light was established near the outer limit of the south pier in July 1912. This light was displayed at a height of forty-one feet from a concrete, pyramidal tower.

When the current Milwaukee Breakwater Lighthouse was nearing completion in 1927, the lantern room and lens from the front pier range light were transferred to the breakwater lighthouse and replaced with an old lantern from stock and a fifth-order Fresnel lens. The North Pier Rear Light was discontinued at that time and removed along with the piers fog signal building.

The fifth-order Fresnel lens used in Milwaukee Pierhead Lighthouse since 1927 was removed in 2005.

In May 2014, Milwaukee Pierhead Lighthouse, deemed excess by the Coast Guard, was made available under the guidelines of the National Historic Lighthouse Preservation Act to eligible entities defined as Federal Agencies, state and local agencies, non-profit corporations, educational agencies, or community development organizations, for education, park, recreation, cultural, or historic preservation purposes. The lighthouse was supposed to go to auction after no suitable organization was found to assume ownership, but when the Corps of Engineers decided it did not want to issue leases of its piers to private parties, the GSA released another Notice of Availability for Wisconsin Point Lighthouse in June 2016.

For a larger map of Milwaukee Pierhead Lighthouse, click the lighthouse in the above map.