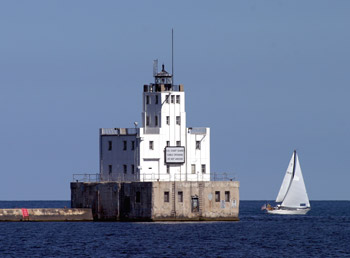 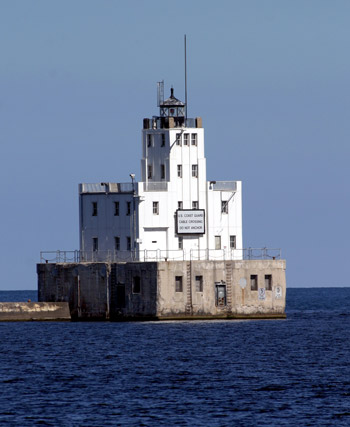 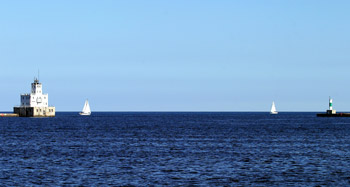 In 1882, work began on a breakwater at Milwaukee to create a harbor of refuge to afford mariners a protected anchorage during severe storms. The north arm of the breakwater starts near North Point and extends southeast for 2,450 feet before turning south and continuing another 1,000 feet. After a gap of 400 feet, the south arm of the breakwater runs another 4,500 feet. The Lighthouse Board noted in 1899 that Congress had provided funds in March of that year for completing the breakwater and requested $75,000 for a permanent light to mark its southern end. While waiting for funding, a temporary beacon, consisting of two, five-day lens lanterns that showed a red light above a white light, was established on the breakwater.

The Lighthouse Board repeated its request for a fourth-order light and a companion fog signal for the breakwater in 1900 and 1901, and then in 1902, it modified its recommendation, asking instead for $100,000 for a third-order light. This more powerful light was to have a focal plane of at least 105 feet and would allow North Point Lighthouse to be discontinued. The Board repeated its request for $100,000 in 1903, 1904, and 1905, before being granted $50,000 toward the construction of a light and fog-signal on the south end of the breakwater in 1906, provided the total cost of the project did not exceed $100,000. A second $50,000 was appropriated in 1907, but after $75,000 was awarded for a lightship at Milwaukee in 1908 and $10,000 was allocated for the restoration of North Point Lighthouse in 1909, the Lighthouse Board decided not to pursue the construction of a major light for the breakwater. The $100,000 was accordingly carried to the surplus fund.

In 1902, while the Lighthouse Board was waiting for funding for a new breakwater light, metalwork was delivered to Milwaukee, and the post light at the southern end of the breakwater was enclosed in a white, hexagonal structure. Work on this new lighthouse, a white pyramid, surmounted by a shaft, having two glazed belts forming the lanterns, surmounted by a dome, was completed in October, and its lights were activated on the twenty-fourth of that month. The upper light was shown at a focal plane of forty-and-a-half feet and the lower light at thirty-two feet.

Under a $74,558 contract, Racine-Truscott-Shell Lake Boat Company built Milwaukee Lightship, (LV 95/WAL 519) in 1911  1912. The 108.5-foot, steel-hulled vessel sank at the contractors docks in Muskegon, Michigan on December 26, 1911, and was not raised until February 20, 1912. The steam screw lightship was equipped with a lantern atop its foremast in which a revolving parabolic reflector and incandescent lamp served as the illuminating apparatus. After MILWAUKEE was painted in white on the lightships red hull, the vessel took up its station three miles offshore from the breakwater on November 1, 1912. The steel foremast was hollow and equipped with an interior ladder that allowed the light to be service without exposing a person to the weather.

In the 1920s, a breakwater was extended from the southern shore of Milwaukee Bay to form an enclosed outer harbor at Milwaukee. The Commissioner of Lighthouses requested $229,800 in 1923 for establishing aids to navigation and improving existing aids at Milwaukee, noting that upon the completion of the work Milwaukee Lightship, which cost $19,000 to maintain each year, could likely be discontinued. The main breakwater entrance would be located directly offshore from the mouth of the river, and would be marked by a major lighthouse on the southern end of the northern breakwater and a minor light on the northern end of the southern breakwater. Besides these lights, minor lights were also placed to mark two other entrances through the breakwater: the northern entrance, and the southern entrance.

Work on extending the northern breakwater, which had a length of 10,354 feet, was completed in 1925, and a pier was built at its southern end to support a major new lighthouse. This temporary light marked the northern breakwater until the permanent light and fog signal were finished and placed in commission on February 26, 1927.

The Annual Report of the Commissioner of Lighthouses provides the following detailed description of Milwaukee Breakwater Lighthouse.

The main light is located at the south end of the north breakwater in 34 feet of water. It marks the north side of the main entrance.

This work was made necessary by the extension of the breakwater to inclose an outer harbor with a restricted entrance. The great importance of this entrance required a station and signal of high class. The main light is located at the south end of the north breakwater in 34 feet of water. It marks the north side of the main entrance.

Structure: The foundation pier, inclosing a basement, is of reinforced concrete, 54 by 60 feet, 20 feet high above water, and rests on a subfoundation formed by three reinforced concrete caissons, each 20 by 54 feet, 21 feet 3 inches deep, standing side by side on a stone fill 4 feet deep over a bottom of natural clay, and above these caissons a reinforced concrete slab 54 by 60 feet and 7 ½ feet deep. The slab forms the floor of the basement, and also serves to join the three caissons together. The outside walls of the basement are 30 inches thick and the main decor or basement roof is 12 inches thick, supported by the outside walls and interior steel columns. The building above the main deck is 43 feet 2 inches by 29 feet 5 inches, of structural steel framework covered with steel plating, and has a flat concrete roof. A square tower, of similar steel construction, rises two stories above the roof of the main structure, and is surmounted by a fourth-order cast-iron lantern, the focal plane of which is about 67 feet above the water. The main deck slab and roof slab are waterproofed with asphaltic membrane, protected by a concrete slab with asphalt expansion joints. The basement is occupied by fog-signal machinery and heating plant and rooms for storage of fuel oil and other supplies. The first floor contains a boat room, kitchen, living room, and dining room. The second floor contains four bedrooms, closets, and bathroom.

Illuminating apparatus: The lantern is provided with a fourth-order fixed lens, illuminated by a 500-watt electric lamp and red screen candlepower of beam 5,000. A commercial sign flasher provides the occulting characteristics of the light.

Fog signal: A type F diaphone is installed in the fourth story or watch room of the tower just below the lantern. Commercial current transmitted by submarine cable furnishes current for the air compressor. Oil-engine-driven compressors provide emergency service in case of failure of the commercial current supply.

Additional equipment: this station is electrically operated throughout. Commercial current is transmitted to the station at 480 volts furnishing current at 110-volts for the radiobeacon tower and dwelling lights, and at 440 volts for the air compressors. This station is provided with a radiobeacon with 200-watt transmitter, the emergency current supply for which is furnished by a gasoline-driven generator. Telephone connection with the city system is maintained through wires carried in the submarine power cable.

Other improvements in aids in this project include acetylene lights at Milwaukee Entrance South Side and Milwaukee South Pierhead; installation of a 300-watt electric lamp in the fifth-order lens at Milwaukee Pierhead; modernizing the dwelling for the North Pierhead Light and North Point Light and changing the fourth-order fixed lens at the latter station to a fourth -order lashing lens with a 500-watt lamp.

For a larger map of Milwaukee Breakwater Lighthouse, click the lighthouse in the above map.

From Interstate 43 in Milwaukee, go east on Interstate 794. Take the Lincoln Memorial Drive exit (1F) and go north to Michigan Street. Turn right onto Michigan Street and then right onto Harbor Drive. Follow Harbor Drive under the interstate to Polk Street. Turn right on Polk Street, which will end at Erie Street. Turn left on Erie Street and follow it to the parking lot at its end. From there you can walk to the pierhead light and get a good view of Milwaukee Breakwater Lighthouse.

The lighthouse is owned by Optima Enrichment. Dwelling/tower closed.