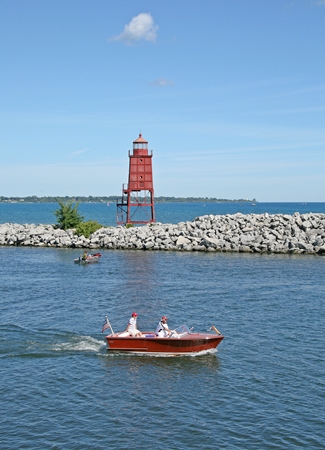 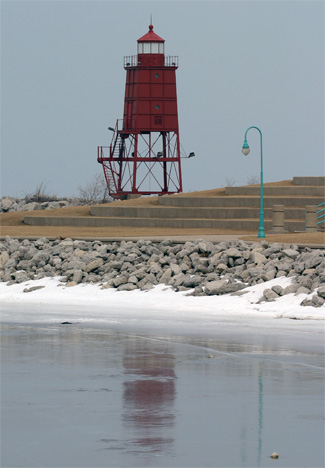 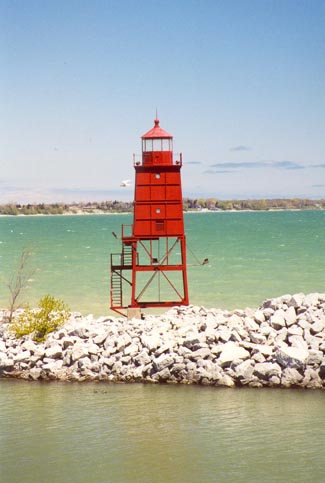 The first lighthouse built at Racine was on the bluff top south of the river in 1838, but as piers and later breakwaters were put in place to protect the harbor, various lights were constructed on these works to help mariners find safe shelter.

In 1845-46, a pier, roughly 600 feet long, was extended seaward from each side of the Racine Rivers mouth, and in 1856-57 another 220 feet was added to the north pier. Racine Harbor Lighthouse was built atop cribwork adjacent to the north pier in 1866. This pier was extended 340 feet in 1869-70, prompting the Lighthouse Board to begin work on a pierhead beacon in July 1872. This wooden, framework tower was painted white and first exhibited its fixed red light on September 5, 1872. An elevated walkway linked the pierhead beacon to Racine Harbor Lighthouse, and the lights from these two structures formed a range for entering the harbor.

Between 1873 and 1881, the north pier was extended another 300 feet, and it grew by this amount again between 1893 and 1895, to reach its final length of over 1,700 feet. In 1893, M. B. Adams, a lighthouse engineer, devised a conduit that could be used for lighting pierheads by means of post lanterns, placed in advance of the usual pierhead beacon. A lantern, resting atop a small car, was run between the pierhead tower and the outer limit of the pier inside an enclosed conduit that measured one foot wide by two feet two inches tall and was supported by trestles placed at intervals of sixteen feet. The outer end of the conduit terminated at a box, fitted with three glass panes, that was mounted atop a post. Nine of these conduits were installed on piers in Lake Michigan in 1893-94. The length of the conduit at Racine was 288 feet, and when the light was established at the end of the conduit on May 28, 1894, the sixth-order light in the wooden tower was discontinued.

In 1896, the wooden tower was relocated to the outer end of the pier, its sixth-order red light was reestablished on June 18, and the conduit light was discontinued. The conduit was removed from the pier, and some 438 feet of elevated walkway were built in its stead.

Captain J. G. Warren of the Corps of Engineers reported in 1899 that heavy, wind-driven seas often entered Racine Harbor and tore vessels from their moorings at the city docks. Warren proposed the construction of a 600-foot-long, detached breakwater off the harbors north pier to break the force of seas from the northeast. This breakwater was completed in November of 1900, just a few weeks later a fixed red post-lantern light, protected on the lake side by a v-shaped timberwork, had been established on its southern end.

In 1901, the Lighthouse Board decided Racine Harbor Lighthouse should be discontinued, and its fourth-order Fresnel lens placed in a new metal tower to be erected at the end of the north pier. After a concrete foundation was created on the pierhead, a skeletal steel tower was put in place and first lighted on November 23, 1901. The twelve-foot-square, enclosed portion of the tower was lined with wood and stood seventeen-and-a-half feet above the pier, while the entire structure measured forty-five feet nine inches from base to ventilator ball. A 960-foot-long elevated walkway provided access to the tower, which was initially painted white, save its black lantern room. This new light and the breakwater light could be aligned for entering the harbor.

A 1,500-pound fog bell was mounted on brackets attached to the eastern face of the metal tower. The machinery for striking the bell was housed in the lower floor of the tower, from where a fourteen-inch galvanized iron weight drop tube extended down to the pier.

In 1904, the post light on the breakwater was covered in metalwork to create a hexagonal, pyramidal tower that resembled an inverted funnel. The light from this structure commenced operation on December 23, 1904.

In the first part of November 1913, the steamer Nyanza arrived at Racine loaded with 2,826 tons of coal. While offloading at the dock, a storm arose, and all hands had to be called on deck at 4 a.m. one morning to secure the vessel. Captain George A. Montgomery described the battle to keep the steamer under control.

We parted every working line we had several times, then we got out our 9 ½-inch brand new hawser. We got two parts out of each end of the boat, in which she snapped like shoestrings. After using up 1,000 feet of our hawser, or, in fact, the whole line, we could do nothing but start working our engine. We had made junk of $650 worth of lines and we had no more, so we started working our engine ahead and astern. About every five minutes, as our steamer would rush ahead, we would back the engine, and when she would rush astern would work ahead.

All this time we lay in the middle of the river and did not know what moment our steamer would rush into the bridge ahead of us. All this time our anchor was down at the bottom, but would drag wherever she went. I must also say that the Carrol Coal Co. dock is three-fourths of a mile from the mouth of the river and around a bend, and that at normal stage of water their docks are between 4 and 5 feet above water, and must say that the sea rolled at least 2 feet over the docks, causing our steamer to roll and pound, in which we were afraid that our rudder and shoe would be damaged.

Obviously, the north breakwater alone had failed to provide the needed protection for the harbor.

In 1933, 18,000 feet of telephone and control cable was laid by the tender Hyacinth between Racine Reef and the Racine Breakwater, allowing the breakwater light to be controlled remotely.

When the square, metal breakwater light was discontinued in 1987, the citizens of Racine fought to keep the structure from being razed. This tower has been floodlit at night, but a metal pole now serves as the official light for the north breakwater.

For a larger map of Racine Breakwater Lighthouse, click the lighthouse in the above map.

From Interstate 94 west of Racine, take Exit 333 and travel west on Highway 20 (Washington Avenue) 9.4 miles to Main Street in downtown Racine. Turn left onto Main Street and then right on Christopher Columbus (4th Street). Follow Christopher Columbus to Racine Harbor Park at its end. At the far end of the park is a viewing platform from which you can view the South Breakwater Light and the more interesting Racine North Breakwater Lighthouse which is across the entrance to the harbor.

The lighthouse is owned by the City of Racine. Grounds/tower closed.