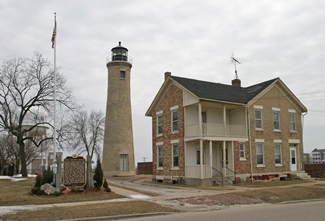 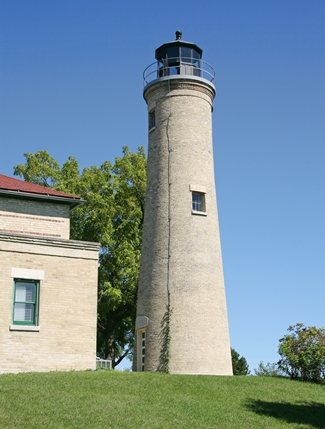 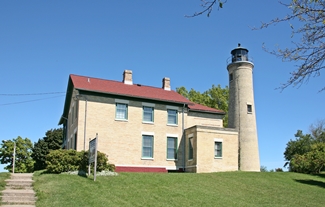 Kenosha has had a few names through the years and quite a few lighthouses as well. Early traders and settlers knew it as Pike Creek, the stream whose branches passed on either side of Washington Island (now Simmons Island), before emptying into Lake Michigan. Then, in 1837, the inhabitants of the place voted to call the settlement Southport, as it was the southernmost Lake Michigan port in Wisconsin. Finally, the name was changed to Kenosha in 1850, when the city was chartered. To create the first lighthouse at Kenosha, a large oak on the shore of Lake Michigan was cut down in the 1830s, leaving a ten-foot-high stump. A layer of stones was then placed atop the stump, and on this various citizens, who served week-long stints as keepers, would kindle a fire of wood every evening during the navigation season. Around 1840, a tower consisting of four posts, twenty-four feet high and topped by a square lantern, was built by subscription at a cost of $60 to replace the stump light.

Henry Dodge, the first Governor of the Territory of Wisconsin, petitioned Congress for a lighthouse at Southport in 1842, 1843, and 1844, before a bill was passed in 1845 appropriating $4,000 for the project. The first federal lighthouse to serve what was then Southport was erected on Simmons Island in 1848, after a contract for its erection had been advertised the previous September. Five lamps set in fourteen-inch reflectors were used atop this brick tower that had a height of sixty-five feet.

In July 1850, Henry B. Miller, Superintendent and Inspector of Lights on the Northwest Lakes, visited the station and found that half of the deck of the light had crumbled down and the upper part of the tower was so badly cracked that he thought $100 would have to be spent to remove the upper portion of the tower and repair it with 5,000 new brick.

The bricks used in the 1848 tower were too soft, and a replacement tower had to be built in 1858. This cylindrical structure had a diameter of eight feet, stood fifty feet tall, and was constructed with an outer wall with a thickness of roughly a foot-and-a-half and an inner wall that was eight inches thick. The towers ten-sided lantern room housed a fifth-order Fresnel lens that produced a flash of white light every ninety seconds. A brick, one-and-a-half-story keepers dwelling was also built in 1858 along with a storeroom located between the tower and dwelling.

The Annual Report of the Lighthouse Board for 1865 noted that the inner wall of the lighthouse at Kenosha was literally crumbling to pieces, and the outer wall showed several cracks, caused by the action of the frost. After Congress appropriated $4,000, the 1858 lighthouse was torn down in 1866, and the present brick tower was erected in its stead, using many of the materials from the old tower. A beacon, erected on a pier at Kenosha earlier that year, was fitted with a fourth-order lens to serve as the main light at Kenosha until the new lighthouse was completed and the lens was transferred to it in time to be exhibited at the opening of navigation in 1867. A companion brick dwelling was completed in 1867, and the lighthouse lot was covered with soil, brought in from the mainland, to combat the shifting sand on the island.

After his service in the Civil War, Joseph Merrill was appointed keeper of Kenosha Lighthouse in 1865. His daughter Emma served as his assistant and taught in a local school. When Keeper Merrill passed away in 1871, Lorinda, his wife, was appointed keeper. Mother and daughter kept the light together until 1872, when they were turned out of their home, and their jobs were given to two men. This move did not sit well with many residents of Kenosha, and the local newspapers tried unsuccessfully to have the Merrills reinstated. Emma, who never married, passed away in 1931, after serving as a bookkeeper in her later years. When Ed Werner, a local historian, learned Emma was buried in an unmarked grave in Greenwood Cemetery, he championed an effort that led to a stone marker, inscribed with a lighthouse, being placed on her grave in 1999.

On May 23, 1906, Kenosha Lighthouse was permanently discontinued, and its fourth-order lens was transferred to a cylindrical metal tower recently erected on the nearby north pier. The dwelling and grounds of Kenosha Light Station were retained for use in connection with the Kenosha pierhead and breakwater lights, and in 1908 a redbrick addition was made to the north side of the dwelling to create a duplex for the keepers. The lantern room was removed from the inactive tower in 1913, and a twenty-five-foot-tall tripod mast was erected atop the capped tower for displaying weather and storm warning signals.

The head keeper at the time Kenosha Lighthouse was deactivated was Louis Napoleon De Deimer, who had been serving in this role since replacing Lorinda Miller in 1872. De Deimer was born in Montreal around 1840 and traced his ancestry back to the same blood as Napoleon Bonaparte. After enlisting in 1861, De Deimer lost his right arm in the Civil War Battle of Chaplin Hills and was discharged a few weeks later on November 1, 1862. The task of climbing the towers stairs multiple times per day, often with a container of kerosene, must have been difficult for De Deimer, but he often had an assistant to help. Mary De Deimer served as her husbands assistant from 1874 until the position was abolished in 1882. An assistant keeper was again authorized for the station in 1889, and the position of second assistant keeper was added in 1901.

The Coast Guard left Kenosha Light Station in 1940, following the automation of the breakwater and pierhead lights. After standing vacant for over a decade, the station was going to be razed, but local residents convinced the government to transfer the property to the City of Kenosha in 1955.

The city and the Kenosha County Historical Society initiated a restoration of the station in 1991, after the property was listed on the National Register of Historic Places in 1990. A grant of $18,675 was used in 1992 to repoint the tower, chemically clean it, and repaint its metal stairway. A $15,000 matching grant from the state allowed a replica lantern room to be fabricated and then installed atop the tower on May 7, 1994. During Fourth of July celebrations two years later, a beacon was activated inside the lantern room, but this light does not function as a navigational aid.

Restoration of the dwelling, which had been used for nearly fifty years as a rental property, commenced in 2004 thanks to various grants. On the outside of the dwelling, the wooden porches were rebuilt, crumbling limestone sills and damaged bricks were replaced, and custom-built wooden windows were installed. Inside, the lathe and plasterwork was repaired, the woodwork and wooden floors were refinished, and a heating and air conditioning system was installed. After work on the first floor of the dwelling was completed in December 2009, exhibits covering the maritime heritage of Kenosha harbor and its various lights were put in place in preparation for the grand opening of the Southport Light Station Museum, held on May 15, 2010.

To help with upkeep of the property, the public can have the historic lighthouse lighted to honor a loved one or to celebrate a special occasion, such as a birthday or anniversary. The illumination is part of a package, which includes an ad placed in the Kenosha News that reads THE LIGHT SHINES. Tonight the 1866 Kenosha Southport Lighthouse shines.

For a larger map of Kenosha Lighthouse, click the lighthouse in the above map.

From Interstate 94 west of Kenosha, take Exit 342 and travel east on Highway 158 (52nd Street) 6.8 miles until it ends. Turn left on 6th Avenue, drive two blocks and turn right onto 50th Street. Take 50th street over the bridge and onto Simmons Island. Turn right after crossing the bridge and you will see Kenosha Lighthouse on your left.

The lighthouse and keeper's dwelling are typically staffed Thursday through Sunday from mid-May through October by Kenosha History Center. Visit their website or call (262) 654-5770 for hours.

The lighthouse is owned by the City of Kenosha. Grounds open, dwelling/tower open in season.


During our trip to this lighthouse in the spring of 2002, a group of school children were there for a tour. We eagerly jumped in line, and although we didn't likely fool the tour guide, we did get to climb the tower. When we had visited the lighthouse in the spring of 1998, the keeper's dwelling was being used as a residence. In 2002, the Kenosha Historical Society had possession of the dwelling and was starting restoration work.