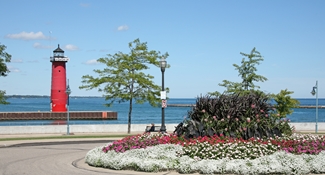 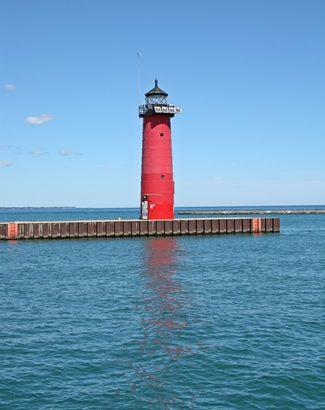 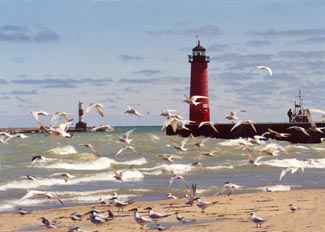 A survey at Southport, now Kenosha, was made in 1837 in order to prepare a plan and estimate for a harbor, but it wasnt until 1844 that Congress appropriated $12,500 for the construction of a harbor at Southport. A further sum of $15,000 was added the next year to aid the completion of the project. When surveyed, the entrance to Pike Creek at Southport was just fifty feet wide, and its depth varied from a few feet to being entirely closed up, depending on storm activity. The soft marsh at the entrance to the creek was excavated and piers were put in place on either side of the entrance to form a landing for steamers. In 1848, a wooden beacon, which stood twelve feet high from its base to its focal plane, was erected at the outer end of the north pier and a rubblestone lighthouse was erected on Simmons Island, just inside the harbor. An 1861 List of Light-houses and Lighted Beacons noted that the pierhead beacon had been using a sixth-order Fresnel, but that it was no longer lighted, having recently been carried away by the sea. Colonel James D. Graham, with the Topographical Engineers, inspected Kenosha Harbor in October 1860 and found the pierwork dilapidated and that the temporary beacon light, erected after the pierhead light was swept away, had been blown down, stranding several vessels trying to enter the harbor in gales of wind during the darkness of the night. Graham recommended the Lighthouse Board erect a permanent beacon light and requested just over $58,000 for dredging, and repairing and extending the piers at Kenosha.

Congress appropriated $7,640 in 1863 for repairing the pier at Kenosha and rebuilding the beacon light thereon. Though the Lighthouse Board directed the project to be quickly completed, a scarcity of lumber prevented work on the pier from starting until 1865. With the pier repaired, a wooden-frame tower with a height of thirty feet was erected on the pierhead in 1866. The fourth-order Fresnel lens from Kenosha Lighthouse was placed in the pierhead tower to serve as the main light at Kenosha while the old Kenosha Lighthouse was torn down and replaced with the present brick tower. At the opening of navigation in 1867, the fourth-order lens was back producing a flashing white light atop Kenosha Lighthouse, and a sixth-order lens had been installed in the pierhead tower to produce a fixed red light.

Over the years, the north pier was extended eastward into Lake Michigan on several occasions. The pierhead light was moved 320 eastward to the end of the extended pier in 1875, and 310 feet of elevated walkway was put in place to allow the keeper to reach the light when seas washed over the pier. In each of the years 1880, 1881, 1883, and 1884, the light was moved seaward by roughly 100 feet to track the work of extending the pier and a corresponding length of elevated walkway was built.

On November 20, 1891, the schooner Evaline ran into the pierhead lighthouse, damaging the watchroom and carrying away a closet and service table. In 1893 and 1894, a pierhead conduit, devised by Lighthouse Engineer M. B. Adams was installed at nine pierhead lights on Lake Michigan. A post lantern was installed seaward of the primary pierhead light to form range lights for entering the various harbors, and the two lights were linked by an enclosed wooden conduit, supported by trestles spaced sixteen feet apart, that allowed a lantern, resting on a small car, to be run to and from the outer light. The outer end of the conduit terminated at a box that had glass panes on three of its four sides. The length of the conduit at Kenosha was 104 feet, the shortest of the nine conduits.

The conduit and outer light at Kenosha were destroyed by a gale on November 1, 1899, but the outer light was restored just five days later on a temporary structure.

Between 1899 and 1901, the entrance to Kenosha Harbor was widened to 250 feet by rebuilding the north pier, and a 600-foot-long breakwater was placed offshore to protect the harbor from northeast seas. An elevated metal walkway was built along the entire length of the new north pier, a distance of 1,040 feet, and the pierhead tower was remodeled to house a blower siren, operated by duplicate two-horsepower oil engines. The siren commenced operation on April 25, 1901.

Starting on October 26, 1900 a fixed red lens-lantern was hung from a temporary post to mark the southeast end of the breakwater and form a range with the pierhead light. To protect the light, an eighteen-foot-long, v-shaped barrier was built on the exposed side of the breakwater used twelve-inch-square lumber. In 1906, an octagonal frame structure, surmounted by a lantern with a dome, replaced the breakwater post light.

The pierhead light also received a new structure in 1906 in the form of a metal tower topped by a fourth-order lantern. This tower was constructed of twelve circular sections with varying diameters to form a gently tapered lighthouse. On April 16, 1921, heavy seas created by a gale seriously damaged the pagoda-type wooden tower with iron frame, located on Kenosha Breakwater. The lake-facing side of the tower was crushed in, the iron framework was broken, and the harbor side was pushed out, leaving a large hole through the tower.

On May 24, 1906, the pierhead light was changed from a sixth-order, fixed red light to a fourth-order flashing white light with a period of fifteen seconds through the installation of the Fresnel lens from Kenosha Lighthouse, which was discontinued at the this time.

A fog signal was housed in a rectangular, pyramidal structure located just seaward of the cylindrical tower and connected to it by a covered passageway. The characteristic of the Kenosha pierhead fog signal had previously been a continuous blast, but on May 24, 1906, it was changed to a ten-second blast followed by ten seconds of silence.

In 1917, the north pier received a new concrete superstructure requiring all 1,040 linear feet of the elevated walkway to be taken down and re-erected. On May 11, 1917 the characteristic of both the breakwater light and the pierhead light was changed to flashing red, and the structures housing the lights were painted red instead of white. In 1925, the pierhead fog signal was changed to an air diaphone in 1925, and the light was electrified.

Lillian Bennett moved into the keepers dwelling next to Kenosha Lighthouse in 1915, when her father, Frederick M. Bennett, became the stations first assistant keeper, and she later shared her memories of life on Simmons Island:

Charles Young lived downstairs in the keepers dwelling. He was the keeper and my father was the assistant. The house was nice. It was kept just beautiful. The brass doorknobs were polished  everything had to be just so. The inspector came twice a year and inspected the house. The basement floor was painted. We didnt have a furnace then  there were coal stoves. We had a big range upstairs in our kitchen  a wood and coal burner.

We didnt have any electric lights when we moved there. I must have been about, oh, ten years old when they put in electric lights. So it was about 1918 when they put in the lights in  about the time of the war. When there were storms, my dad would go out to the red pierhead lighthouse  the Coast Guard had a little lookout on the pier  they would call after my dad got out to the lighthouse to start the foghorn  the Coast Guard would call us to say he got here okay, so my mother wouldnt worry about him.

Lillian returned to her lighthouse home in September 1994 to be part of the ceremonies celebrating the rededication of the lighthouse, after it had been refurbished and outfitted with a new lantern room.

The elevated walkway and fog signal structure disappeared from the north pier long ago, but the red cylindrical tower continues to serve as the primary light at Kenosha. A cylindrical D-9 tower was installed on the southern end of the breakwater in the 1960s.

In June 2008, Kenosha Pierhead Lighthouse, deemed excess by the Coast Guard, was offered at no cost to eligible entities, including federal, state and local agencies, non-profit corporations, educational agencies, or community development organizations. After no qualified group stepped forward to assume responsibility for the lighthouse, it was placed on the General Services Administration auction website starting on October 18, 2010. Since the fifty-foot-tall cylindrical tower offers no living space and a potential owner would have to obtain a lease from the U.S. Army Corps of Engineers, which owns the pier, it is not too surprising that the minimum bid of $10,000 was not received before the auction closed on December 2.

A second auction for Kenosha Pierhead Lighthouse started on May 25, 2011 with a starting bid of $5,000. A bid for this amount was placed on June 17, and the auction closed on July 15 with a winning bid of $17,000. Five bidders participated in the auction, and the winner of the auction was John Burhani, a local artist. Burhani, who fished off the pier as a kid and learned to sail in Kenosha Harbor, felt the lighthouse would be the perfect space for his studio. After the interior of the tower was renovated during the spring of 2012, the lighthouse was opened on select days so the public can view Burhans work, which features marine scenes and sailboats. John Burhani passed away in 2015 at the age of forty-nine, following a courageous battle with non-Hodgkins lymphoma. Heather McGee, Johns wife, decided to create an artist in residence program at the lighthouse to honor her husband and keep his vision of the space alive. In 2017, four artists transformed the pierhead lighthouse into a creative art studio that attracted more than 700 visitors over a two-month period. I am thrilled with the caliber of talent the participants have had and the positive interactions between the public and the residents, lighthouse owner Heather McGee said. I am eager to continue and grow this program, and 2018 is shaping up to have more artists and more opportunities for our community members to experience art in its many forms.

For a larger map of Kenosha Pierhead Lighthouse, click the lighthouse in the above map.

From Interstate 94 west of Kenosha, take Exit 342 and travel east on Highway 158 (52nd Street) 6.8 miles until it ends. Turn left on 6th Avenue, drive two blocks and turn right onto 50th Street. Take 50th street over the bridge and onto Simmons Island. Turn right after crossing the bridge and follow the road down to the pier.