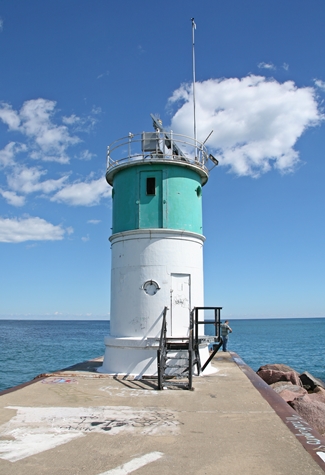 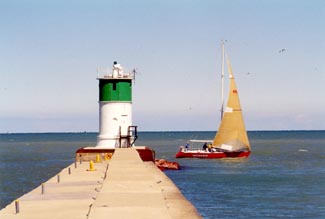 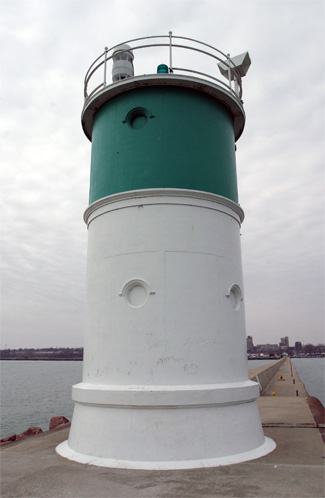 Situated roughly midway between Chicago and Milwaukee, Waukegan started as a French trading post and Pottawatomie Indian settlement known as Little Fort. Its population grew from 150 people in 1844 to 2,500 in 1849, when the residents determined their town was no longer little and decided to change its name to Waukegan, a Pottawatomie word for trading post. In 1846, Illinois Congressman John Wentworth presented a petition from citizens of the State of Illinois and Territory of Wisconsin praying an appropriation for the construction of a harbor and lighthouse at Little Fort, on Lake Michigan. Congress provided $4,000 for a lighthouse at Little Fort in 1847, and two years later a brick tower, measuring roughly thirty-five feet tall, and a six-room, one-and-a-half-story keepers dwelling were completed. The tower tapered from a diameter of twelve feet nine inches at its base to seven feet at the lantern room, while the dwelling was thirty-two feet by nineteen feet. Truman Hibbard was hired in 1849 to serve as the lights first keeper. Eight lamps and fourteen-inch reflectors were being used in the lantern room in 1851, and a sixth-order Fresnel lens was installed in 1858.

William B. Snowhook, Superintendent of Lights at Chicago, described the harbor improvements underway at Waukegan in 1853 and the sorry state of the towns four-year-old lighthouse.

The present light-house, being half a mile west of the breakwater, would not then be required. I would beg leave to state here that this light-house is in a dilapidated condition, and defective in every respect; and, if it is the intention of the government to preserve it, the necessary repairs cannot be made too soon. The tower is built with soft brick, the centre of the wall being filled with a mixture of gravel and bad lime, with little if any adhesion. The action of the frost has caused the outside brick to scale off in many places to a depth of three inches in the wall. The foundation was not laid deep enough in the ground, and an embankment was made around the base to protect it from the action of the frost.

The deck or platform is lower, instead of higher, at the centre; consequently the water lodges around and runs inside the lantern. It will be seen, from the present condition of this light-house, that the repairs, if any be made, would require a new outside wall of hard brick, to be built from foundation to deck, with a stone coping on the top, and the deck raised in the centre and covered with galvanized iron of a proper thickness.

Congress had appropriated $15,000 in 1852 for harbor improvements at Waukegan that included a breakwater, parallel to the shore, to protect the piers in the harbor. It was this breakwater that Snowhook wanted marked, and in 1854 Congress allocated $10,500 for a permanent foundation pier near the breakwater to be topped by a light. One crib, thirty feet by twenty-five feet, was put in position to start forming the breakwater, but it was carried away by a storm, and the breakwater project was abandoned.

The cancellation of the breakwater light forced the Lighthouse Board to make improvements to the old 1849 lighthouse. In 1860, a wooden tower was built atop the keepers dwelling, and a new octagonal, cast-iron lantern was installed thereon. With this new lighthouse in place, the old brick tower was demolished. In 1868, new outbuildings were added to the station, and repairs to the dwellings roof were completed. The lighthouse lot was fenced in and the tower repainted in 1880.

John Williams, who lost an arm in the Battle of Gettysburg, was appointed keeper of Waukegan Lighthouse in 1865, and he and his wife, Helen, raised seven children at the station. In February 1892, one of these children, John C. Williams, wrote the inspector to inform him of his fathers passing. He appointed me 17 years of age to take care of the light. I will do so until further notice by you. I have tended to the whole business since he was taken sick, two weeks ago today. George Larsen was made keeper of the light in April 1892 to replace Williams.

Appropriations of $15,000 were made in both 1880 and 1881 to create a harbor at Waukegan. Knapp & Gillen of Racine signed a contract on June 27, 1881 and soon began work on two projecting piers to inclose a small basin and protect vessels while in port. Amazingly, this work took nearly two decades and over $200,000 to complete. The piers finally reached their full projected lengths in 1898, and on August 10, 1898 a temporary iron post light was established on the outer end of the north pier. This light was changed from fixed white to red in October, and on December 31, 1898, the fifth-order light in the old lighthouse on the bluff was discontinued.

The metalwork for a permanent tower, manufactured by Russell Wheel & Foundry Co. of Detroit, was shipped to Waukegan on June 29, 1899 along with a fourth-order lantern room from the lighthouse depot in Detroit. After a concrete foundation was completed at the end of the south pier, the metal tower was erected, and its light, produced by a fourth-order Henry-LePaute Fresnel lens that shone white for twenty seconds followed by four red flashes at intervals of five seconds, was established on August 31, 1899. An elevated walk, 400 feet long, was built on the pier along with a lifeline for the keeper, for which 1,075 feet of galvanized wire rope and forty-five wrought-iron posts were used. No longer needed, the former lighthouse reservation was sold at auction to the City of Waukegan on June 20, 1899.

In 1902, a river and harbor appropriation act made provisions for an improved harbor with a depth of twenty-one feet at Waukegan. The Lighthouse Board requested $10,000 for a light and fog signal to mark the new work. In 1905, the metal tower was relocated to mark the outer end of the south pier, which had been extended 1,400 feet. The elevated walk was extended from the former location to the new one, and in 1906, a steel, two-story, fog signal building, lined with brick, was attached to the cast-iron tower. Two, sixteen-horse-power, mineral oil engines were employed to produce a two-second blast of the fog horn every twenty seconds. As part of the improvements, on February 7, 1905, a red lens lantern light was established on the end of the new breakwater in the form of a pyramidal frame structure with metal covering and galvanized corrugated iron.

Frederick Raether was promoted to head keeper of Waukegan Lighthouse in 1902 after having served three years as assistant keeper at Wind Point Lighthouse. In December 1907, Keeper Raether apparently slipped on the icy pier surrounding the lighthouse and tumbled into the frigid waters of Lake Michigan. When Assistant Keeper Charles Tesnow went to relieve Raether, he found the doors to the lighthouse open and the head keepers coat and overcoat hanging on a peg inside. Raethers cap was found floating in the lake, which led authorities to believe he had fallen into the lake and drowned. Raethers widow and mother of the couples three children was prostrated when told of the news but was not too surprised, as her husband had often told her that his duties were fraught with danger. Raethers body was not found until a violent storm just over a year later stirred up the waters of Lake Michigan. The body was identified by its gold teeth and a wedding ring.

A two-story, redbrick double dwelling was built onshore for the head keeper and two assistants in 1909. This structure had six rooms on each side, with a toilet and bath in the basement. In 1919, two bathrooms were built on the first floor, and fixtures were moved from the basement. The light atop the tower on the pier was electrified in 1939, and a new fog signal was installed.

In 1967, a fire broke out in the fog signal building that resulted in the near total destruction of that structure and the lantern room of the attached tower. The charred remains of the fog signal were removed from the pier, and the light tower was capped and topped by an exposed beacon. Today, the upper portion of the 1899 tower is painted green, and an occulting green light is displayed for mariners.

The 1909 keepers dwelling remains standing on the corner of Madison Street and Harbor Place and has recently been home to a deli and a bait and tackle shop.

For a larger map of Waukegan Harbor Lighthouse, click the lighthouse in the above map.

From Interstate 94 west of Waukegan, take Exit 65 onto Highway 120 and drive east 1.9 miles where the highway ends. Continue straight on Belvidere Street for 3.1 miles to Pershing Road. Turn left on Pershing Road and then right on Madison Street and follow it to its end. Government Pier, with the light at its far end, starts just south of the end of Madison Street. You may walk the pier to the light.