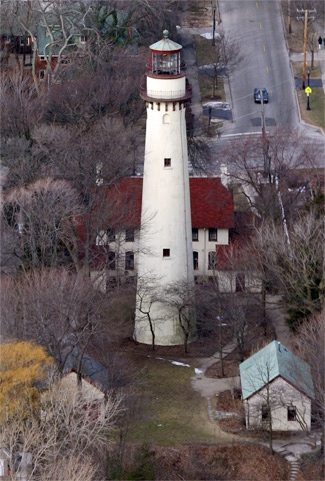 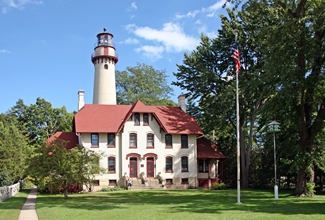 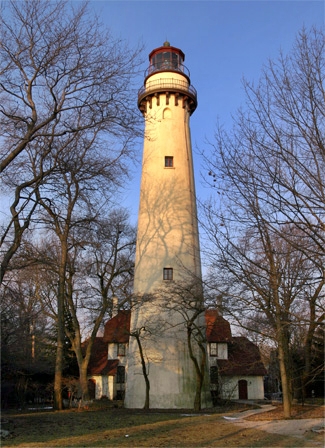 In 1870, the Lighthouse Board recommended that the cast-iron lighthouse, in use since 1859 on the North Pier at Chicago, be relocated to Grosse Point, thirteen miles to the north, where it would there serve what it was intended for, to mark the approach to Chicago, and a prominent point of the coast. The North Pier at Chicago had been extended 1,200 feet lakeward since the iron lighthouse was erected, and the smoke of the numerous nearby steamers and factories often obscured the towers light. For some reason this plan was rejected, and the lighthouse remained at Chicago until it was dismantled in 1894 and parts of it were used at Twin River (Rawley Point), Wisconsin. Grosse Point instead received a magnificent brick tower linked to an Italianate duplex.

The twenty-five-foot bluff on which the lighthouse was built had been known as Grosse Point (great point) since French fur trappers frequented the area in the seventeenth century. Explorer and Jesuit Missionary Jacques Marquette recorded camping on Grosse Pointe on December 3 during his 1674 expedition to what would become Chicago.

On the night of September 7, 1860, the Lady Elgin was northbound from Chicago carrying Irish Union Guards returning to Milwaukee after hearing a campaign speech by Stephen A. Douglas, Abraham Lincolns opponent in the presidential election. When off Grosse Point, the Lady Elgin was rammed just aft of its side paddlewheel by the lumber-laden schooner Augusta, and within twenty minutes, the steamship had split apart and sunk.

When day broke, many of the surviving passengers and crew were drifting in stormy waters, clinging to pieces of the wreckage. Students from nearby Northwestern University gathered on the shore, scanning the water for signs of life. One student, Edward W. Spencer, rescued seventeen people before collapsing from overexertion and exposure, and a plaque honoring his effort can be seen in the Northwestern University Library. Nearly 300 lives were lost with the sinking of the Lady Elgin, making it the worst maritime disaster on the Great Lakes up to that time. Other shipwrecks occurred off Grosse Point during the next decade, spurring the residents of Evanston to petition Congress for a lighthouse.

In 1871, Congress appropriated $35,000 for a lighthouse on Grosse Point, and a 100 by 550-foot site was purchased for $1,200. Orlando Metcalfe Poe was appointed Chief Engineer of the Upper Great Lakes Lighthouse District in 1870, and in this capacity designed many of the tall, graceful brick towers that adorn the Great Lakes. Poe drew up plans and specifications for Grosse Point Lighthouse in 1872, and after proposals for the construction of the station were solicited by advertisement, they were opened on August 13, 1872. The lowest bid was accepted, and the excavation for the foundations of the tower, covered way, and dwelling commenced in September. By the end of the working season in November, the stonework of the dwelling had been brought up to ground level.

Work resumed the following April, and over a two-month period the brickwork of the dwelling was nearly completed and ninety-one piles were driven to a depth of fifteen feet and overlaid by a four-foot-thick concrete footing to support the tower. By the end of June, the passageway, the stonework for the towers foundation, and the outside of the dwelling were nearly completed. During the rest of the year, the 113-foot-tall brick tower, which tapers from a diameter of twenty-two feet at its base to thirteen feet three inches at the parapet, gradually rose above the attached dwelling.

A second-order Fresnel lens, manufactured in Paris by Henry-Lepaute, was installed in the lantern room, and the light was activated on March 1, 1874. Three panels of red glass were slowly rotated around the fixed lens by a clockwork mechanism powered by a sixty-pound weight that was suspended within the towers double walls. Click here to see a photograph of Keeper Edwin Moore winding up the weight in the towers lantern room. The lights characteristic was fixed white, varied by a ten-second red flash every three minutes. A second-order Fresnel lens is the largest size ever used on the Great Lakes, and Grosse Points second-order lens was the first one installed on the lakes and the only one that remains active today.

According to a newspaper account in 1924, the Grosse Point lens was one of three purchased in France for $10,000 apiece in 1860. Two of these lenses were sent to Florida where lighthouses were under construction, but the outbreak of the Civil War prevented their installation. The lenses were buried in an isolated spot to prevent them from falling into rebel hands, and after the conflict, they were dug up and one was eventually sent to Grosse Point.

The keepers duplex stands seventy-three feet west of the tower, and had seven rooms in each of its two apartments. The head keeper resided in the south side of the duplex, while the first assistant was given four rooms in the other side, and the second assistant the remaining three rooms. The station originally had just one assistant, but a second was added in 1880 to help with the extra workload caused by the new fog signal.

In 1871, Chicago was Americas busiest port. Despite being closed in the winter, more ships arrived at Chicago than New York and San Francisco combined. The Evanston Index reported in 1885 that 8,787 sailing vessels and 3,566 steam vessels had passed Grosse Point during the navigation season. When traveling south on Lake Michigan from the Straits of Mackinac toward Chicago, mariners would steer for Grosse Point and then follow the shore to Chicago. Grosse Point thus functioned as a landfall light, and in 1880 two buildings were built seaward of the tower to house duplicate steam sirens to help mariners during times of poor visibility. In 1892, ten-inch steam whistles were substituted for the sirens. Between 1885 and 1894, the fog signal, which gave five-second blasts separated alternately by twenty and forty seconds, was in operation an average of 245 hours each year.

On July 26, 1888, Anthony Hagan, head keeper of Grosse Point Lighthouse, wrote the following to Inspector C.E. Clark: Mr. Palmer, 2nd Asst., quit work at 10:30 a.m. as I was cleaning leaves in the Tower and told me that he did not care for the Light-house, now that I am left alone and the Light all up side down, I most respectfully request that Assistant will be sent me that will obey my orders. I shall get the Light in order to light tonight if fog dont get up. There must have been more to the story as Keeper Hagan was removed from office less than two weeks later. Edwin J. Moore was appointed head keeper in his place and served at Grosse Point for thirty-six years, until his death in 1924 at the age of seventy-three.

Keeper Moore started his lightkeeping career as second assistant at Grosse Point in 1883. He left in 1885 to become head keeper of Calumet Pierhead Lighthouse, and then returned in 1888 to take charge of Grosse Point Lighthouse. According to a newspaper article on March 3, 1924 announcing his death, Keeper Moores last thoughts were of his duty:  Is the light all right, mother? he asked his wife as he collapsed from heart failure, a few minutes after he had descended from the 147 foot tower, where he had turned on the light for what was to be the last time. Keeper Moore was sixty-nine years old, when he passed away on March 1, 1924.

Due to deterioration of the bricks used to construct the lighthouse, scaffolding was erected around the tower in 1914, and it was encased in reinforced concrete at a cost of $2,679.

Grosse Points light was discontinued in 1941, when lighted buoys were anchored seven miles offshore. The towers Fresnel lens was reactivated in February of 1946 and now serves as a private aid to navigation, showing a group of two flashes every fifteen seconds. During World War II, the lighthouse was used by two physicists from nearby Northwestern University to conduct experiments on photocells for detecting infrared light. Prototypes of these devices were used in advanced radar detection systems to monitor the movements of enemy aircraft.

Around the time the station was de-staffed, the passageway connecting the tower and dwelling was removed as was the one-and-a-half-story wing on the north side of the dwelling, which had begun to separate from the main part of the house. The passageway was reconstructed in 1984 using the original 1873 specifications, and in 1993, the missing wing was rebuilt. The fully restored light station now fits in nicely with the mansions that dot the shoreline of this historic neighborhood.

The north side of the duplex houses a museum for visitors and an office for the park district, while a keeper, a position held by Don Terras for many years, lives on the south side of the duplex. Grosse Point Lighthouse was listed on the National Register of Historic Places in 1976 and designated a National Historic Landmark in 1999.

Located at 2601 Sheridan Road in Evanston, roughly 13 miles north of Chicago on the shore of Lake Michigan and just north of Northwestern University.
Latitude: 42.06393, Longitude: -87.67602

For a larger map of Grosse Point Lighthouse, click the lighthouse in the above map.

From Interstate 94 north of Chicago, take Exit 35 and proceed east on Old Orchard Road. After 1.4 miles, turn left on Crawford Avenue and then right on Central Street. Follow Central 2.5 miles to its end at Sheridan Road, where Grosse Point Lighthouse is located. Parking is available in the Evanston Art Center lot north of the lighthouse.

Tours of the dwelling and tower at Grosse Point Lighthouse are given on Saturdays and Sundays at 2, 3 and 4 p.m., June through September (closed on Labor Day weekend and July 4th). Call (847) 328-6961 for more information.

The lighthouse is owned by the City of Evanston. Grounds open, dwelling/tower open during tours.


Click here for a closeup view of the sound deflector installed atop the fog signal building.