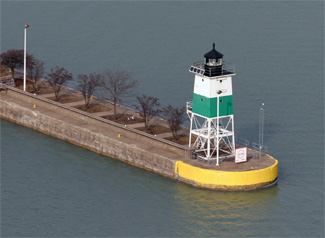 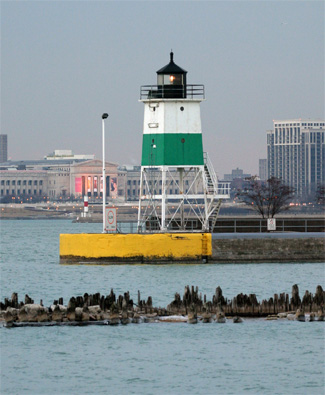 The first lighthouse at Chicago commenced operation near the mouth of the Chicago River in 1833. After piers were constructed at the entrance to the river, a new skeletal iron lighthouse was activated at the extremity of the North Pier on July 9, 1859. During the next decade, the North Pier was extended lakeward at different times until its end was 1,200 feet from the 1859 lighthouse. A beacon lighthouse, equipped with a sixth-order lens, was established at the outer end of the pier in 1860, and in 1881 a fog bell, struck by machinery, was erected nearby.

In 1885, a new open-frame tower was built at the end of the pier to replace the old one, and the lantern room and lens were transferred to this new tower. At the same time, the fog bell house was painted, and the elevated walkway, which allowed the keeper access to the tower in inclement weather, was repaired. In 1892, the fog bell was in operation for 414 hours.

When Chicago Harbor Lighthouse, situated near the southern end of the new breakwater, was activated on November 9, 1893, the 1859 tower was discontinued, dismantled, and parts of it incorporated into a new tower at Twin River, Wisconsin.

In 1899, a fog bell apparatus, formerly used at St. Joseph Pierhead, was repaired and placed into service at the Chicago Pierhead Range. The old fog bell house from Chicago was shipped to the depot at St. Joseph for repairs, preparatory to be installed at Frankfort Pierhead.

In 1906, the North Pier was reconstructed in concrete by the War Department, and plans and estimates were made for a new cylindrical metal tower and a pierhead range tower. On October 15, 1908, these new range lights were activated, with the front light being shown from a twenty-eight-foot-tall steel tower with an oval cross-section, and the rear light being shown from a forty-one-foot-tall cylindrical metal tower.

The following account of a rescue on the North Pier appeared in an 1919 edition of The American Marine Engineer:

On August 7, 1919, Albert Van Velzen, assistant keeper, Chicago Pierhead Light Station, Ill., while working at the tower on the north pier, hearing that some one had fallen overboard, seized a grapnel hook, with line attached, and ran a distance of about 1,000 feet to where a boys hat was seen floating in the water. On the second cast of the grapnel by Mr. Van Velzen, the boy was caught under the arm, brought to the surface, and resuscitated by the life guards who had arrived by this time. The boy was under water at least eight minutes.

The action of Mr. Van Velzen in this case is especially creditable due to his physical condition, his feet having been frozen years ago while walking, during a severe storm, from the keepers dwelling to the light under his charge.

Mr. Van Velzen has been commended by the department for his action in this instance, as well as for the rescue from drowning, on July 28, 1919, of a man who had fallen into the water near the light station.

To improve the visibility of the pierhead range lights, their illuminants were changed from oil to electricity in 1929. Underwater electrical cables were run in 1932 from the North Pier to Chicago Harbor Breakwater Lighthouse. This allowed for the consolidation of the Pierhead Station and the Breakwater Station and the elimination of two keeper positions. Two brick-veneer double dwellings were built at the Chicago Lighthouse Depot for the keepers of Chicago Harbor Lighthouse, and the old dwelling was removed on a scow to Frankfort, Michigan.

To comply with a 1930 Supreme Court order that limited the amount of water allowed to flow from Lake Michigan into the Chicago River, a set of locks was built at the rivers entrance between 1936 and 1938. It was at this time that the Chicago Harbor Southeast Guidewall was built, and the present tower was established at its eastern end in 1938. Prior to being placed on the guidewall at Chicago, the metal tower had served as Kewaunee Pierhead Lighthouse in Wisconsin from 1912 to 1931.

The Sanitary District of Chicago awarded a construction contract for the lock and guidewalls to the Frazier-Davis Construction Company. The lock and appurtenant structures were built under a War Department permit to prevent the reversal of the river into the lake during periods of heavy rains. The Chicago River was reversed in 1900 to flow into the Sanitary and Ship Canal and then eventually into the Mississippi River. This reversal separated the citys Lake Michigan drinking water supply from the sewage effluent in the Chicago River and helped prevent cholera/typhoid epidemics.

The Southeast Guidewall Light was described in 1938 as a white steel tower, the upper part of which is inclosed, surmounted by a fourth order vertical bar lantern housing the lens. The light is occulting, showing a white light of 6,600 c.p., 1 seconds in duration every 2 seconds. The fog bell is mounted on a bracket attached to the lake side of the tower and sounds a single stroked at 10-second intervals. Also in 1938, a light was established on the west end of the south guidewall and on the east end of the north guidewall. These two additional aids were thirty-one-foot-tall skeleton steel towers. The north guidewall tower was painted a straw color and showed a flashing red light while the inner south guidewall tower was white and exhibited a flashing white light.

The Chicago Harbor Lock opens around 10,000 times each year, making it the second busiest lock in the country. Over 50,000 vessels, carrying around 900,000 passengers, pass through the lock annually.

For a larger map of Chicago Harbor Southeast Guidewall Lighthouse, click the lighthouse in the above map.

From Interstate 94 in Chicago, take Exit 50B and proceed east to Lake Michigan and Navy Pier. There is parking on Navy Pier and fairly good views of the Chicago Harbor Southeast Guidewall Lighthouse can be had from the south side of the pier. Shoreline Sightseeing offers harbor and skyline tours that depart from Navy Pier, affording good views of the light.