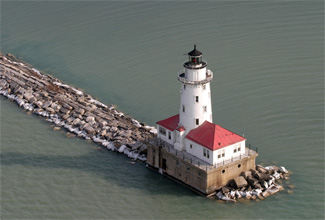 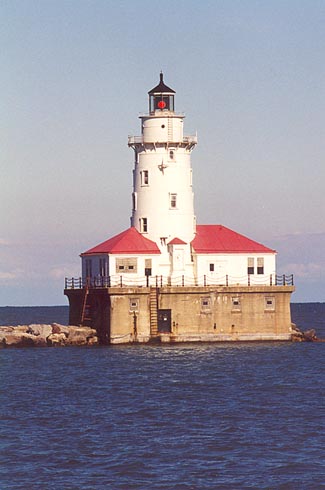 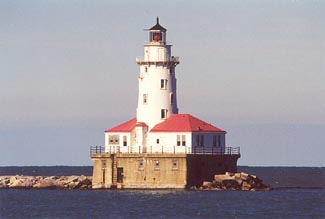 In 1673, French Canadian explorers Louis Jolliet and Father Jacques Marquette learned of the Chicago Portage while canoeing upstream on the Mississippi River. Native Indians showed the explorers that by traveling overland for just a few miles between the Des Plaines River and the Chicago River, they could easily navigate between the Great Lakes and the Gulf of Mexico. This vital link destined Chicago to be an important center of commerce, and in 1848 the opening of the Illinois and Michigan Canal connected Lake Michigan to the Mississippi River. On March 3, 1831, Congress appropriated $5,000 for a lighthouse to mark the mouth of the Chicago River. According to History of Chicago by Alfred Theodore Andreas, Samuel Jackson was hired as the contractor, but before the lighthouse was completed, it collapsed on October 30, 1831. A few hours before it toppled over, Andreas wrote, so confident were many there was no danger of its falling, that several went upon the top of it, some of the visitors being women. The walls were three feet thick, and the tower had been raised to a height of fifty feet.

Jackson claimed the tower had been built on quicksand, which caused the tower to settle unevenly and fall, but others believed it was shoddy workmanship. Regardless, Jackson soon started work on a second tower and completed it the following year. This lighthouse stood forty feet high and employed four, fourteen-inch reflectors in its bird-cage lantern room. Samuel Lasby was employed as keeper of the light, which was the first established on Lake Michigan.

A troublesome sandbar made accessing the Chicago River difficult, and troops from nearby Fort Dearborn were often given ditch digging duty to keep a clear channel open. Lieutenant G.J. Pendergrast of the U.S. Navy filed the following report on Chicago and its lighthouse in 1837:

This is a highly important place, containing about six thousand inhabitants. There is a good stationary light here, and a harbor nearly completed. It now forms the only place of shelter along the entire western shore of Lake Michigan, and has already been the means of saving many lives and much property. When the piers are finished, the light-house ought to be placed on one of them, and the old light should then be discontinued.

Around 1857, the Democratic Press gave a description of Chicago Harbor that included the following: First, the light-house, well enough when it was built twenty years ago, but now surrounded and shut from the view of the mariner by a number of higher buildings between it and the lake  perfectly useless  but lighted up punctually and carefully every night.

In the 1850s, piers were completed to create a proper entrance to the Chicago River, and a lighthouse was placed on the outer end of the North Pier. The Annual Report of the Light-House Board for 1853 records:

The work on the light-house and pier at Chicago, Illinois, are under the superintendence of Lieut. Webster, of the corps of topographical engineers, and under the direction of that bureau. This officer, in his report to that bureau, September 1, 1853, states that the pier head put down for the foundation of the light-house is sufficient for the purpose for which it was designed, and that the light should be one of the first class for the lakes, which is equivalent to the third order lens at Wagooshance, and that it is very much needed, as the present one is very imperfect and altogether insufficient.

A contract for the lighthouses ironwork was made in 1857. Work began on erecting the tower the following year, but due to bad weather, the lighthouse was not activated until July 9, 1859. The tower had nine supporting iron piles, eight arranged in an octagon thirty-three feet in diameter, and one in the center. Atop these were a watchroom and lantern room, accessed by a circular stairway enclosed in the central supporting column.

In 1870, the Lighthouse Board noted that when the octagonal iron lighthouse was first lit in 1859, it marked the outer end of the North Pier, however, the pier had since been extended lakeward at different times, leaving the tower 1,200 feet from the outer limit of the pier. A beacon light, employing a sixth-order lens, had been established at the end of the extended pier in 1869. The Lighthouse Board recommended that the octagonal tower, whose light was often obscured by the smoke of the many factories and steamers in the vicinity, be relocated to Grosse Point, thirteen miles north of Chicago, and that a light be exhibited from the gable end of the keepers dwelling to range with the new beacon light.

A masonry tower was built at Grosse Point instead, and the iron tower remained in service on the North Pier, operating in tandem with the beacon light. In 1881, a fog bell, struck by machinery, was established at the end of the North Pier, and in 1885 a new open-frame tower was built, and the lantern room and lens from the old beacon light were transferred to it. An elevated walkway allowed the keeper to access the pierhead light in inclement weather.

Work began on a 5,430-foot-long breakwater to protect Chicago Harbor in the 1870s, and at the opening of navigation in 1877, two small lights were put in place to mark the ends of this structure. The Lighthouse Board was given $36,000 in 1889 for a light and steam fog signal to better mark the now completed breakwater and serve as the primary light for the harbor. Noting that the Harbor of Chicago was the most important on the lakes, with a greater average number of daily arrivals and departures during the season of navigation than any other in the United States, the Lighthouse Board complained that the amount of the appropriation was inadequate as the breakwater-light should correspond in style of construction and durability of material with the importance of its function and should have some pretensions to architectural effect. The Board requested an additional $15,000 and was awarded this amount in 1890.

A contract was made on September 23, 1889 for the lighthouses foundation crib, which was to be located 100 feet inside the southeast end of the breakwater and thirty feet distant from it. The crib measured forty by sixty feet, had a height of nearly twenty-four feet, and was sunk atop ten feet of riprap on Christmas Day, 1889. Contracts for an iron tower, duplicate fog signal boilers, and a foundation superstructure for the crib were made in 1891. The stone foundation was completed on September 2, 1892, and work on the superstructure commenced in March 1893, after Congress had provided $15,500 for completing the station. By the end of June, the brick lining of the basement was complete, and the base course of the iron tower was in place. Erection of the tower, which was flanked by a fog signal house on two sides, was completed on September 1, 1893. The lighthouse had a hot water heater that was connected to a system of radiators throughout the tower. Water was housed in two cisterns in the towers basement. A steel bridge connected the nearby outer breakwater with the lighthouse, which exhibited its light for the first time on November 9, 1893.

The third-order Fresnel lens used in the lantern room of the new lighthouse was manufactured by Henri Le Paute in France for New Point Loma Lighthouse in San Diego, California. Messr. Le Paute entered the lens in the Paris Exhibition of 1889, and after it won a gold medal, he obtained permission to exhibit the lens at Chicagos 1893 Colombian Exposition and provide a different lens for Point Loma. The exposition concluded on October 30, just in time for the lens to be installed in the new Chicago Harbor Lighthouse.

With the activation of Chicago Harbor Lighthouse, the 1859 iron lighthouse, then known as Chicago River Lighthouse, was discontinued. Its lens was disassembled, boxed up, and shipped to Detroit. The skeletal iron tower was taken apart during June and July of 1894, and all parts were newly marked with white lead, punch, or chisel, so they could be reassembled as part of the new tower at Rawley Point, Wisconsin.

The original fog signal houses that flanked Chicago Harbor Lighthouse were constructed of heavy framing lumber, which was covered with two-inch planking and then sheathed in corrugated iron. The structures measured eleven by twenty-four feet, and each housed engines and boilers to operate a ten-inch steam whistle. The whistles were in operation roughly 400 hours per year, though a report in 1904 record that they were in operation that year for some 1,293 hours and consumed about 83 tons of coal and 10 cords of wood. Sound deflectors were placed behind the whistles in 1901, and in 1912, oil engines were installed to drive a ten-inch compressed air chime whistle, that gave a three-second blast every thirty seconds.

On June 12, 1917, Congress appropriated $88,000 for relocating Chicago Harbor Lighthouse. The existing breakwater had been extended southward, and a second breakwater was being constructed south of it. The War Department had agreed to build a stone and timber crib at the south end of the north arm of the new breakwater to serve as the foundation pier for the Harbor Lighthouse, along with foundations for minor lights at the ends of the southern breakwater.

The reinforced concrete superstructure for the foundation pier was completed in December 1917, and during the summer of 1918, the cast-iron tower was relocated from its old stone-faced crib, and a new steel fog signal building and boat house were attached to it. The light was first displayed from its new location on August 1, 1918, while the fog signal was placed in operation on May 8 earlier that year. Interior finish work at the lighthouse continued through November 1919.

The steam fog signal was changed to an air diaphone in 1925, greatly increasing its range. That same year, the light was electrified. A radiobeacon was established at the breakwater lighthouse in 1928 to further aid mariners in finding the entrance to the harbor.

Three main lighthouses have stood watch over Chicago Harbor as the city has grown from a small military outpost to the third-largest city in the United States.

In 2005, Chicago Harbor Lighthouse, deemed excess by the Coast Guard, was offered at no cost to eligible entities, including federal, state, and local agencies, non-profit corporations, and educational organizations under the provisions of the National Historic Lighthouse Preservation Act of 2000. Though it took a few years, Secretary of the Interior Ken Salazar initiated the transfer of the lighthouse to the City of Chicago on February 24, 2009. The city had designated the lighthouse a Chicago Landmark in 2003. After the city failed to do anything with the lighthouse after more than a decade of ownership, the General Services Administration asked in 2020 that the lighthouse be returned to the federal government.

For a larger map of Chicago Harbor Lighthouse, click the lighthouse in the above map.

From Interstate 94 in Chicago, take Exit 50B and proceed east to Lake Michigan and Navy Pier. There is parking on Navy Pier and fairly good views of Chicago Harbor Lighthouse can be had from the end of the pier. Shoreline Sightseeing offers harbor and skyline tours that depart from Navy Pier, affording good views of the lighthouse.

The lighthouse is owned by the City of Chicago. Tower closed.


Chicago Harbor Lighthouse has appeared in at least four movies: The Color of Money, The Jackal, Meet the Parents, and Message in a Bottle.