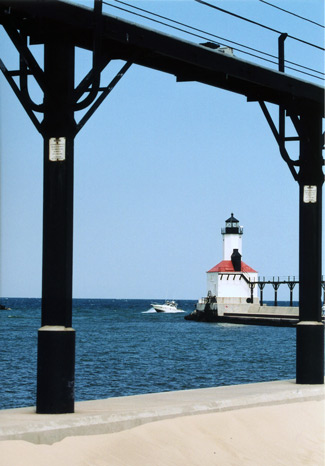 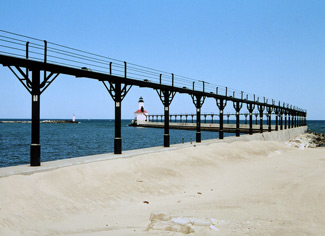 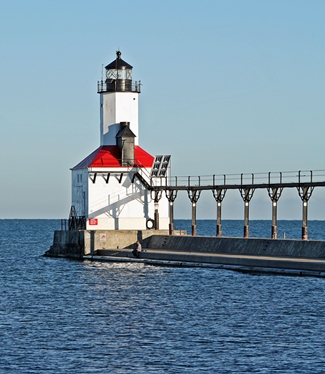 In 1830, fourteen years after Indiana became a state, real estate speculator Isaac C. Elston paid $200, sight unseen, for 160 acres of land at the mouth of Trail Creek. His ambitious plan was to create Indianas first harbor on Lake Michigan. The resulting town of Michigan City was incorporated in 1836 with 1,500 residents, a church, post office, newspaper, twelve dry goods stores, and ten hotels. In 1835, Isaac Elston, knowing that a lighthouse was key to the continued growth of his settlement, deeded to the federal government a tract of land that ran from the bend in Trail Creek to the lake.

On June 30, 1834, Congress appropriated $5,000 for a lighthouse at Michigan City. Two bids were received for the work, but they both exceeded the appropriation. On May 9, 1836, an additional $3,000 was budgeted for the lighthouse, and a contract for its construction was awarded that August to Jeremey Hixon, Sr. and his son. The lighthouse was to be completed by October 20, 1836, but some of the necessary material was lost when a supply ship was driven ashore in September.

Work continued in 1837, and the lighthouse was ready to be lit in December of that year. Edmund B. Harrison was appointed the first keeper that month, but it appears the light was not exhibited until the summer of 1838.

The original Michigan City Lighthouse consisted of a conical brick tower with a height of thirty-nine feet that tapered from a diameter of fourteen-feet seven inches at its base to six feet eleven inches at its lantern room. A one-and-a-half-story brick dwelling, measuring thirty-four by twenty feet and topped by a shingled roof, was provided for the keeper. An 1848 Light List indicates that four lamps, set in fourteen-inch reflectors, were used in the lantern room. A sixth-order Fresnel lens was installed in 1857.

To support the growing commerce of the port, a new lighthouse was constructed at Michigan City in 1858. This time, instead of constructing a separate tower and dwelling, a short, square, wooden tower was built atop the northern end of a new, seven-room, one-and-a-half-story dwelling. The foundation of the structure was built of Joliet stone, while Milwaukee cream city brick was used for the upper portion. The towers lantern room had nine sides, two of which were blind, and housed a new, fifth-order, L. Sautter & Cie. Fresnel lens that produced a fixed white light at a focal plane of fifty-two feet.

In 1867, Captain A. Mackenzie of the United States Engineers was directed to visit Michigan City and make a report of the harbor. That May, Captain Mackenzie wrote: The harbor at Michigan City is in so poor a condition that it can hardly be called a harbor. The channel between the two piers extending from Trail Creek was so shallow that only small fishing boats could use it. To support his recommendation that the channel be dredged and the piers be extended, Mackenzie explained: A good harbor is needed at Michigan City, not only on account of its being at the foot of the lake where vessels can run when they cannot make side ports, but on account of the fine country back of it.

After the piers had been extended, a wooden tower and an elevated walk were erected on the east pier in 1871. Four years later, these structures were transferred to the longer west pier, and about 800 feet of new elevated walk was built. In December 1885, a severe storm damaged the elevated walk and pier. Finding it impossible to tend the pierhead light and fearing for the safety of the tower, the keeper removed the light apparatus and discontinued the light until repairs could be made. A severe gale on October 14, 1886, swept away the pierhead beacon.

Harriet Colfax moved to Michigan City from New York in 1853 to help her brother run a daily newspaper. When her brothers failing health forced him to give up his business, Harriet was left with no means of support. For a period, the position of lighthouse keeper was a political appointment, and Harriet turned to her cousin, Congressman Schuyler Colfax, to obtain the appointment in 1861 of keeper of Michigan City Lighthouse. Harriet moved into the lighthouse with her life-long friend and companion Ann Hartwell. When the pierhead light was added to the station in 1871, an assistant was hired to help with the added workload.

On June 6, 1900, Congress appropriated $195,000 to construct a detached breakwater and extend the eastern pier to form an outer harbor at Michigan City. The sum of $5,500 was also provided for lights and a fog signal to mark the improvements. A work party arrived at Michigan City in June 1904 to erect the new aids to navigation, and on October 20, 1904, the fixed white light atop the 1858 Michigan City Lighthouse was discontinued and established at the outer end of the east pier in the octagonal metal tower surmounting the twenty-four-foot-square fog signal building. On the same date, a fixed red lens lantern was established atop a post on the breakwater and a fixed red light was displayed on the west pierhead from a cylindrical steel tower, standing twenty-eight feet tall and topped by a decagonal lantern room. The east pierhead fog signal was a ten-inch steam whistle that sounded a five-second blast each minute when necessary.

The 1858 lighthouse was remodeled and enlarged to provide quarters for three keepers, who were now responsible for three lights and a fog signal. Four rooms were provided for the head keeper on the east side, while the two assistant keepers were given three rooms each on the west side. Separate entrances were provided via a round porch on the east and a rectangular porch on the west. No longer needed, the lantern room and tower were removed from the dwelling.

Harriet Colfax retired at the age of eighty on October 14, 1904, just six days before the light she had faithfully tended for forty-three years was extinguished. On October 8, she wrote in the logbook: Sold household effects preparatory to vacating the dear old lighthouse. Her last entry was four days later: Fair, warm wind, smokey atmosphere. Received another call from Mr. Armstrong, my successor. On October 13, Keeper Thomas Armstrong recorded: The retiring keeper left the station this 4 p.m. and all her personal effects.

Harriet Colfax passed away on April 16, 1905, just a few months after the death of Ann Hartwell and less than a year after leaving the lighthouse. A few weeks before her retirement, Harriet Colfax, the oldest active keeper in the country, told the following to a reporter from the Chicago Tribune.

I have a helper to carry up the lamps, but always trim and light them myself. In forty-three years none but me has done it. I love the lamps, the old lighthouse, and the work. They are the habit, the home, everything dear I have known for so long. I could not bear to see anyone else light my lamp. I would rather die here than live elsewhere. The work is easier now than it was once. Since the old beacon light was swept away I have but this main light to tend. In the old days they used lard oil for the lamps, and in cold weather we had to heat it. It was great trouble in cold weather to make the old beacon burn. The lard oil would get hard before I could get the lamp lighted, but once lit it never went out, you may be sure. My lights never went out till I quenched them myself.

Harriets faithfulness through the years earned Michigan City Lighthouse the nickname of Old Faithful. Storms often wreaked havoc on the exposed structures on the piers and breakwater. In 1906, the cylindrical tower on the west pier was washed away, forcing a lens lantern to be shown from a post, until the tower could be retrieved and placed back atop the pier. The breakwater light was destroyed during a storm in February 1909 and replaced in 1911 by a buoy lantern placed atop a square, concrete, pyramidal shaft. A storm that struck the Great Lakes on November 8, 9, and 10 of 1913 destroyed 200 feet of the elevated walk, forcing the keepers to rig up an aerial trolley with a breeches buoy so they could cross this gap and reach the pierhead light in rough weather.

Thomas Armstrong, who replaced Harriet Colfax as head keeper in 1904, was in charge of the station until 1918. In 1916, Keeper Armstrong was recognized for rescuing two men from drowning, and the following year, his act of saving a boy who had fallen from the pier was noted in Lighthouse Service records.

A storm that whipped up Lake Michigan on December 18 and 19, 1929 carried away the outermost 312 feet of the elevated walkway on the east pier. The Great Lakes Dredge and Dock Company was awarded an emergency contract to bring in a derrick scow and place large stones to protect the damaged pier.

In 1933, three years after Walter Donovan began serving as head keeper, the East Pierhead Lighthouse was automated. Keeper Donovan passed away in 1940, and as the Coast Guard had assumed responsibilities for the nations lights the previous year and had a station nearby, the 1858 lighthouse was no longer needed for housing. After being rented for a period and then used by the Coast Guard Auxiliary, the lighthouse was declared surplus in 1960.

The General Services Administration sold the lighthouse to Michigan City in 1963 for $18,500, and two years later the Michigan City Historical City signed a twenty-year lease for the building. After eight years of work, the restored lighthouse opened to the public on June 9, 1973, complete with a new tower and lantern room built using funds donated by the local Marquette Chapter of Questers. A year later, the 1858 lighthouse and the lighthouse and catwalk on the east pier were placed on the National Register of Historic Places. The catwalk was turned over to Michigan City in 1991, and a restoration effort was launched a few years later to replace damaged structural elements and install lighting under the catwalk.

In 2003, the Hoosier Lighthousing Club installed a spiral staircase in Michigan City Lighthouse that now allows visitors to climb up into the lantern room. In order to make room for the staircase, an old brick chimney had to be removed and larger holes had to be cut in the lantern room and attic. During the last week of September 2014, the replica lantern room built in the 1970s was removed from the lighthouse and replaced with a new one built locally and funded by the city and the Department of Transportation.

In May 2007, Michigan City East Pierhead Lighthouse, deemed excess by the Coast Guard, was offered at no cost to eligible entities, including federal, state and local agencies, non-profit corporations, educational agencies, or community development organizations. Michigan City filed a letter of interest for the structure and was eventually awarded the lighthouse.

For a larger map of Michigan City East Pierhead Lighthouse, click the lighthouse in the above map.

From Interstate 94, take Highway 35 into Michigan City. Where Highway 35 intersects Highway 12, turn left on Highway 12 then right on Pine Street. Pine Street will become Franklin Street after two blocks, which will lead you over a bridge to Lakeshore Drive. Turn right onto Lakeshore Drive and take the first left. Follow this road west to the marina, from where you can walk the pier to the light.

The lighthouse is owned by Michigan City. Tower closed.