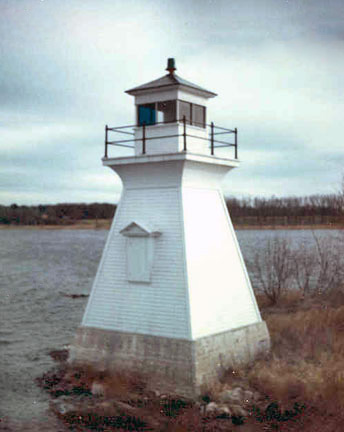 Ile Ste-Rosalie, also known as Ile Rosalie or Crab Island, is a small island situated on the Ontario side of Ottawa River offshore from Fairmont Le Château Montebello.

In 1912, Thomas Weir oversaw the erection of a wooden tower and the installation of a sixth-order dioptric illuminating apparatus in its lantern room to mark the island. The cost of the lighthouse was $1289.73. Alphonse Rosalie was appointed the first keeper of the lighthouse on October 29, 1912 at an annual salary of roughly $220, and he served as keeper until his death in 1936.

After vandals destroyed the islands wooden lighthouse in 1978, a skeletal tower was used to exhibit a light from the island until 1999, when a buoy was placed nearby. In 2021, Île Ste-Rosalie light buoy H311 was anchored just north of the island and exhibited a flashing green light every four seconds.

For a larger map of Ile Ste-Rosalie (Crab Island) Lighthouse, click the lighthouse in the above map.