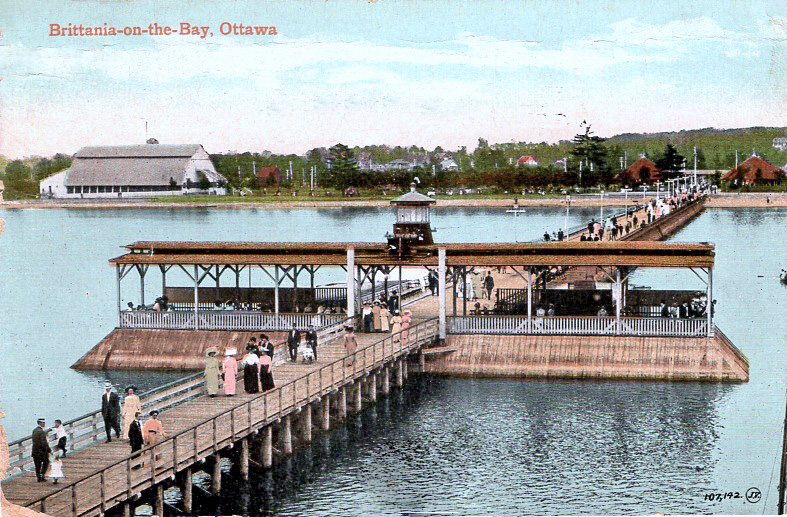 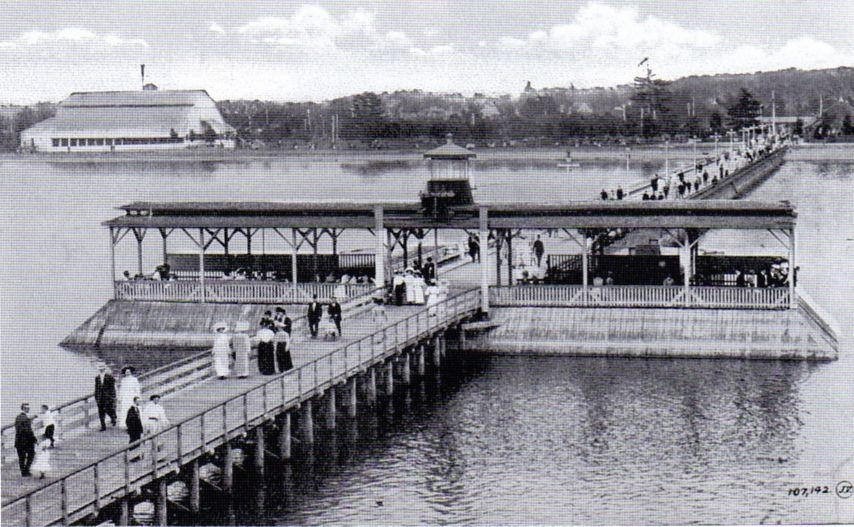 Lac Deschênes is a forty-four-kilometre-long section of the Ottawa River that runs from Chats Falls Dam near Fitzroy Harbour in the west to Deschênes Rapids at Britannia in the east, just above Ottawa.

In 1876, Matthew Murphy was appointed keeper of the lighthouse that had been recently erected at the head of Deschênes Rapids at an annual salary of $150. Keeper Murphy served until his death in 1887 at the age of seventy-two. Thomas Graham then served as keeper for two years, followed by a few months of service by T.S. Pigott. Robert W. Winthrop began his lengthy stint as keeper of the lighthouse in 1890.

Britannia This lighthouse, on Lake Deschenes, was carried away by freshet in the spring of 1904. On the opening of navigation in 1905, it was replaced by a light shown from a wooden lantern surmounting the pavilion on the outer end of the Ottawa Electric Railway Companys pier, at a point distant 1,047 feet N. 22° E. from the site of the old lighthouse. The outer end of the pier consists of a T 60 feet long by 23 feet wide on which stands the pavilion, consisting of wooden pillars supporting a flat roof. The wooden lantern, octagonal in plan, the base being painted brown and the upper part in shades of green, stands on the middle of this roof. The height from the deck of the pier to the ventilator on the lantern is 25 feet. The light, elevated 26 feet above the summer level of the river, is an occulting red light, visible for 5 seconds and eclipsed for 2 ½ seconds alternately, and visible 6 miles from all points of approach by water. The illuminating apparatus is dioptric of the seventh order, and the illuminant electricity.

In 1900, the Ottawa Electric Railway Company established an amusement park, with swimming and boating facilities at Lac Deschênes, on eighteen acres of land in the summer cottage community of Britannia Village, west of Ottawa. In just twenty-eight minutes, residents of Ottawa could reach the Britannia-on-the-Bay tram stop, where they used a high footbridge to cross the Canadian Pacific Railway tracks and reach the beach and the thirty-foot-wide pier that extended over 1,000 feet into Lac Deschênes. Two octagonal pavilions at the land end of the pier housed a restaurant, changing rooms, bathrooms, and sitting rooms, while a three-storey boathouse at the outer end served as the Britannia boating Clubs clubhouse. Electric lights illuminated the pier, which had seating along it so guests could enjoy the water views and watch the promenading crowds. During the summer, the double-decker, side-wheeler steamer G.B. Greene would take tourists upstream as far as Chat Falls.

With the establishment of the light on the pier in 1904, the Ottawa Electric Light Company was placed in charge of its operation in place of Keeper Winthrop.

Britannia Light was discontinued in 1908 as the locality was plainly indicated by the electric lights at the terminus of the Ottawa Electric Railway Companys line, in the public park, and on the wharf and boathouse connected with the park.

The wooden pier was demolished in 1958, but the area remains a popular place for boaters and swimmers.

For a larger map of Brittania (Deschênes Rapids) Lighthouse, click the lighthouse in the above map.