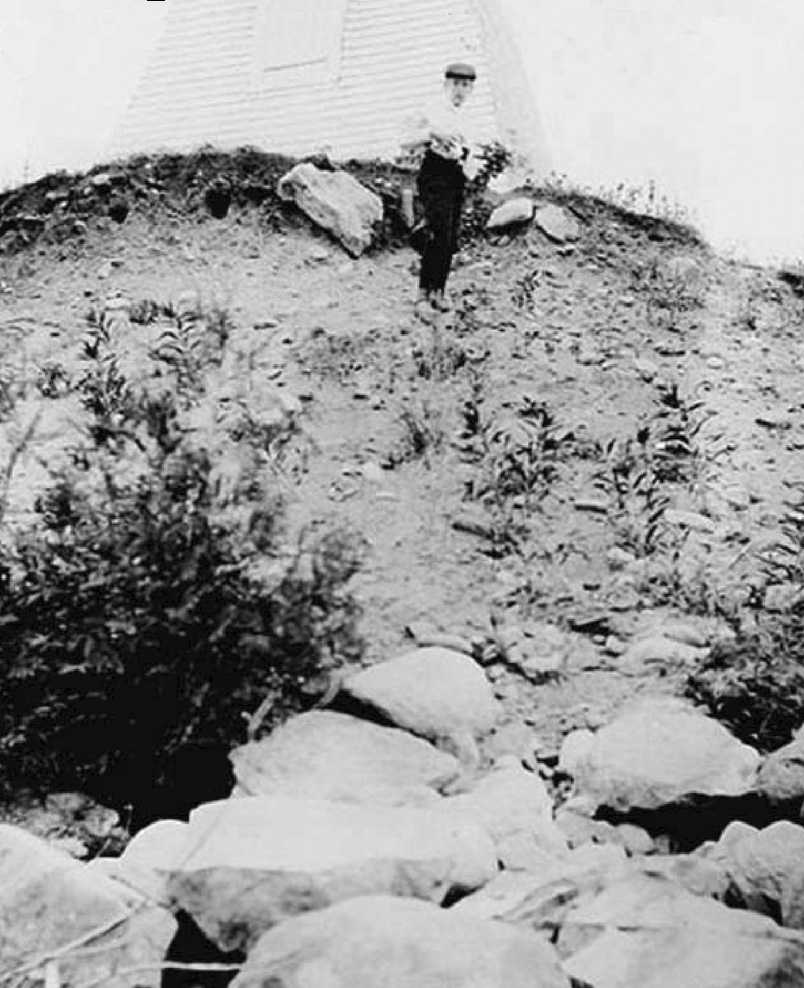 Aylmer, located on the north shore of the Ottawa River, is a former city in the province of Quebec that was amalgamated into the city of Gatineau in 2002. Just west of Aylmer and just over the Quebec-Ontario border that runs through the middle of Ottawa River is found Aylmer Island.

In 1883, the Department of Marine established a light on Aylmer Island along with five other places along the Upper Ottawa River as noted in the departments annual report for that year:

Six new lighthouses on the Upper Ottawa River, at the following points, via.: At Aylmer Island, in Lake des Chenes; Baskins Wharf, Lake des Chenes, about 12 miles above Aylmer; Buckoms Point, in the same Lake, about 16 miles farther up the Ottawa; Morrisons Island or Hawleys Island, about 3 miles below Pembroke, and McQuestions Point, on the south shore of the Deep River, about 25 miles above Pembroke. In each case a fixed white light is shown from a small dioptric lantern, hoisted to the top of a mast, having a small shed at its base.

Francois Boucher was appointed the first keeper of Aylmer Island Light at an annual salary of $100. On the morning of November 21, 1895, Keeper Boucher left Aylmer to attend to the light on Aylmer Island. While he was there, the wind kicked up and delayed his return until later that evening. Some men near the old Cormier Mill noticed a boat with a man in it jammed in the loose ice in the river. With great difficulty, the men were able to get close enough to the boat to throw a line to Keeper Boucher and draw him ashore. The newspaper account relating this incident says that Keeper Boucher was half frozen and more dead than alive when rescued.

The Department of Marine established an enclosed lighthouse on Aylmer Island in 1898:

The lighthouse stands on the summit of the small island, near its north-west extremity, and is 1 ½ miles above Aylmer village wharf. It is a square, enclosed, wooden tower, with sloping sides, surmounted by a square wooden lantern, and is painted white throughout. It is 34 feet high, from the ground to the vane on the lantern.

The light is a fixed white light, elevated 52 feet above the summer level of the lake, and should be visible 10 miles all around the horizon. The illuminating apparatus is dioptric, of small size.

The work was done in a very satisfactory manner by Mr. F. Bourgeau of Aylmer, whose contract price was $485.

Francis Boucher took over responsibility of Aylmer Island Lighthouse in the spring of 1907. He looked after the light until 1922, when E. Sowter was made its keeper. In 1908, a 360°, fifth-order, French lens was placed in the lantern room of the lighthouse.

In 2021, a white, cylindrical tower with a green upper portion was displaying a flashing green light on Aylmer Island.

For a larger map of Aylmer Island Lighthouse, click the lighthouse in the above map.

The modern light is best seen by boat, but distant views should be possible from the shore.