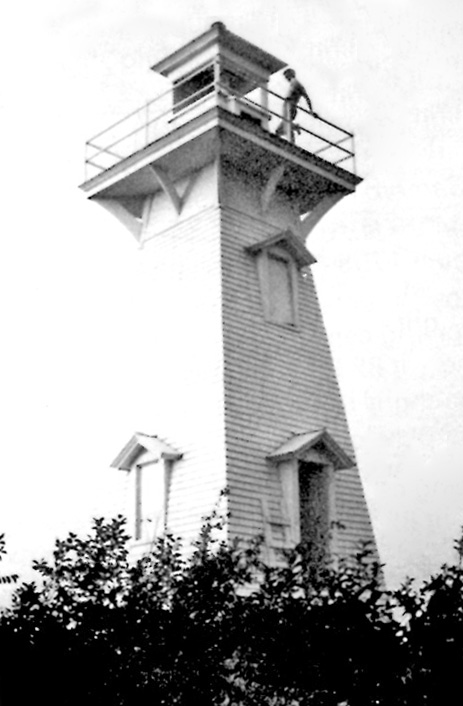 The town of Arnprior is situated sixty-five kilometres west of Ottawa at the confluence of the Madawaska River and Ottawa River. The wide section of the Ottawa River off Arnprior is known as Lac des Chats (Lake of the Cats), and a small, rocky island is located near the Ontario-Quebec border that runs through the middle of the lake.

In 1885, the Department of Marine had three navigational lights built to aid navigation on the Ottawa River as described in its annual report for that year:

Three beacon lights on the Upper Ottawa River, between the Counties of Renfrew, Ont., and Pontiac, Que., located as follows: One on the islet in Lake des Chats, opposite the town of Arnprior; one on the north side of Coulonge Lake, half mile above old Fort Coulonge; and the third on the head of Spence's Island, in the Lower Allumette Lake. In each case a fixed white light is shown from a small dioptric lantern hoisted to the top of a mast, having a small shed, painted white at its base. These beacons were erected at a cost of $485.

James Hughes was appointed the first keeper of Arnprior Island Lighthouse in April 1885 at an annual salary of $150. He served until he went west in 1888. John McIntosh was then placed in charge of the light.

In 1896, a new mast that was ten feet taller than the one placed on Arnprior Island in 1885 was put on the island and topped by a seventh-order dioptric lantern rather than a pressed lens lantern. The colour of the light was changed from white to red as this time to distinguish it from the lights in the town of Arnprior. The cost of the new mast was $40.31 and the new lantern $98.

The Department of Marine replaced the mast light in 1906 with an enclosed, wooden lighthouse as described in its annual report for that year:

A lighthouse was erected upon Arnprior island, replacing the mast light previously maintained. The building consists of a square wooden tower, with sloping sides, surmounted by a square wooden lantern. It stands upon a concrete pier in the form of the frustum of a square pyramid, and the pier is whitewashed and the tower, painted white, is 26 feet high from the pier to the ventilator on the lantern. The light is fixed white dioptric of the sixth order, and is elevated 29 feet above the summer level of the river, and visible ten miles from all points of approach.

The work was done by days labour under the foremanship of Mr. E. Corriveau, at a cost of $1,068.

Inside the wooden tower, two straight flights of stairs with an almost ladder-like pitch led to the square lantern room, which was supported by eight brackets.

William Kilroy replaced John McIntosh as keeper in 1905. Keeper Kilroy served until 1920, after which time no keepers for Arnprior could be found in the annual list of keepers so the light may have been automated at that time.

In 1959, the light which had been powered by acetylene was converted to battery operation. The wooden Arnprior Island Lighthouse was destroyed by fire on April 25, 1973. In 2021, a white cylindrical tower with a red upper portion was displaying a flashing white light on Arnprior Island.

For a larger map of Arnprior Island Lighthouse, click the lighthouse in the above map.

The modern light is best seen by boat, but distant views are possible from the shore.