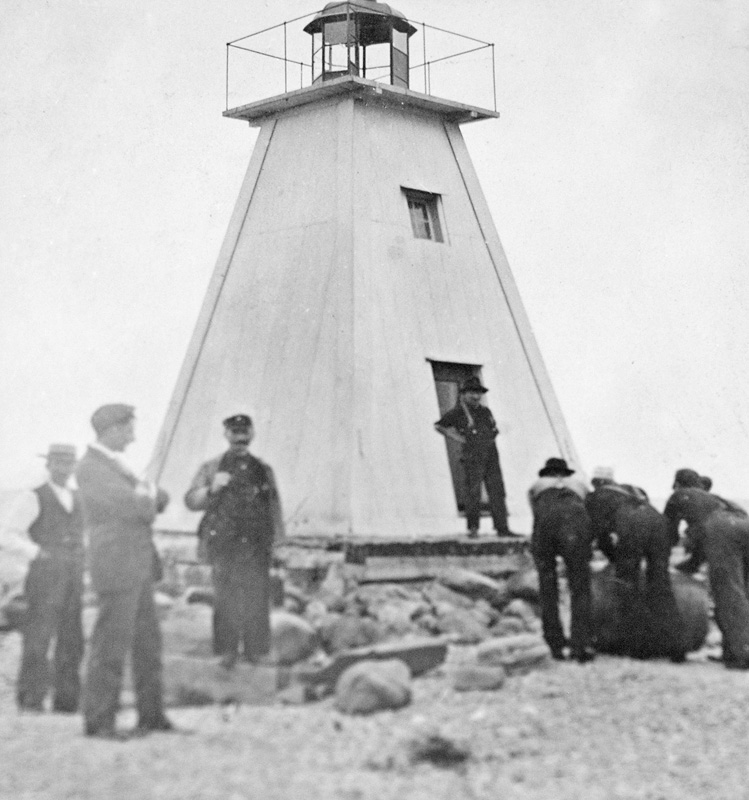 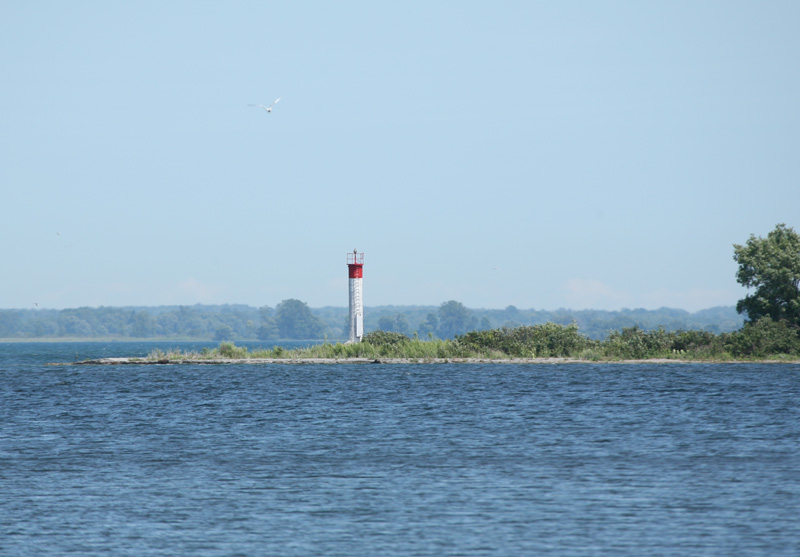 Work on a lighthouse to mark the tip of the L-shaped Presquile Peninsula, located on Lake Ontario just west of Prince Edward County, began in 1838, and the octagonal, stone tower was placed in operation in 1840.

Presquile Bay, protected from Lake Ontario by Presquile Peninsula, was the only harbour of refuge between Kingston and Windsor, but shoals at its entrance made it dangerous for mariners. In 1844, the Board of Works recommended improvements to light the bay:

At Presquisle, a small colored Light on the end of Salt Point is very much required to enable vessels to take that Harbour in Dark nights; and a Buoy on the North East end of the Bar outside, together with a small landing wharf within the Harbour, are absolutely necessary.

It took several years for the legislature to approve additional lights for Presquile Bay, but the Department of Public Works was finally able to complete the project in 1851. The following Notice to Mariners, published in April 1851, announced the completion of a set of range lights:

Notice is hereby given that the Commissioners of this Department have caused the following named Lights etc. to be placed to mark the entrance to Presqu'Isle Harbor viz.:

Two leading Lights, one on Salt Point, and the other near to an old Barn on the opposite hill.

A Black Buoy to mark the east end of the Long Shoal, or middle ground, and two Red Buoys to mark the north shoal, on the starboard side in entering the Harbor.

Vessels entering the Harbor should run for the main north shore, eastward of the large Light House and of the Black Buoy, until they get into nine or ten feet of water, then shape their course N.W. until the leading lights come in range, then keeping the lights in range, in a W.S.W. course until they have passed the first leading Light, when anchorage ground will be found.

Thomas Lee, James Newman, and James Smith built the range lights according to the following specification:

The Towers to be Eighteen feet high to the lantern, twelve feet wide at base and four feet at platform which is to be eight feet square of double boards or plank and covered with felt & zinc with a proper scuttle to enter the lantern, & hand rail round the edge. The towers to be well framed with sufficient girts, studs, joist & Braces. To be covered first with common pine boards and sheeted over with well matched grooved & tongued inch pine boards. To have one window of four lights, one Double batten door mounted with T hinges, lock & latch. Two floors of 1 ½ inch matched grooved & tongued pine plank on each tower.

To have an Iron lantern fitted on top of platform with lamp frame, Lamps, reflectors etc. complete.

The lanterns to be glazed & painted if necessary. The outside of towers to receive two coats of paint. All the materials will be furnished by the Department Public Works.

Between 1872 and 1875, A.E. Munson dredged a channel through Middle Ground Shoal at the entrance to Presquile Bay to create a new entrance channel that had a depth of eleven feet and a width of up to 220 feet. This new channel remained unmarked until 1878, when Roderick Cameron of Lancaster was contracted to build a new lighthouse in Presquile Harbour. This lighthouse was a square, pyramidal structure, built of wood, that stood twenty-two feet tall and was placed atop a crib near the edge Calf Pasture Shoal on the south side of the harbour. This new lighthouse was 3,525 feet northwest of the light on Salt Point and ranged with the light on Salt Point to mark the dredged channel at the entrance to the harbour. This new light was known as Calf Pasture Shoal Light or Presque Isle Harbour Light. The total cost for the new lighthouse was $2,193.

With the opening of Murray Canal in 1889 that connected Presquile Bay to Bay of Quinte, new lights were needed in Presquile Bay. The lighthouse on Calf Pasture Shoal was relocated in 1891 to a pier 1,100 feet from Brighton Wharf to become part of a new set of range lights. At the same time, the back range light at Salt Point, which had shown the alignment for the old entrance channel to Presquile Bay, was discontinued. Though its light was discontinued, the back tower remained standing as a daymark until it was removed in 1903 due to decay. The light on Salt Point was permanently discontinued after the 1907 navigation season. Hedley Simpson served as keeper of the light on Salt Point from 1888 until the light was discontinued in 1907. After that, he remained as keeper of Brighton Range Lights.

A flashing red light, known as Salt Reef Light, is shown today from a white cylindrical tower with a red upper portion that stands in the water just east of Salt Point.

Salt Point reportedly received its name during the War of 1812 when an American schooner was driven into Presquile Harbour during a storm and had to unload its cargo of salt on the point in order to flee.

For a larger map of Salt Point (Presqu'île Range) Lighthouse, click the lighthouse in the above map.

The modern light on Salt Reef can be viewed from the Calf Pasture Day Use Area.