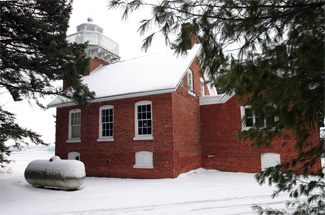 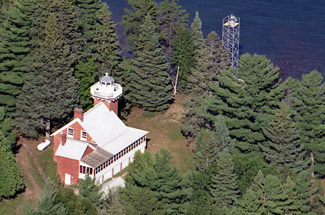 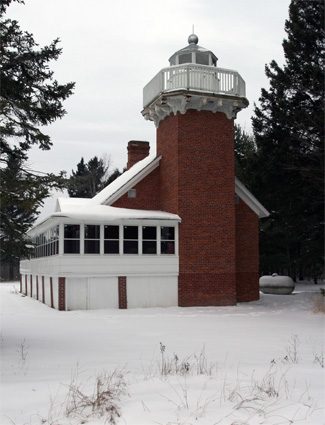 LAnse, French for The Cove, is the name French Explorers applied to the small, protected bay in the southwest corner of Keweenaw Bay. Peter Crebassa, considered the town father of LAnse, built a trading post on the bay for the American Fur Trading Company in 1837 and a few years later convinced Father Frederic Baraga to start a Catholic mission nearby. In 1863, a committee was dispatched to the Great Lakes to determine the necessity of a few newly proposed lighthouses and the desirability of re-establishing discontinued lights. While examining these predetermined sites, the committee also noted the need for additional lights on Lake Superior to support the growing copper and iron ore trade near Keweenaw Peninsula. One of these additional lights was recommended for Sand Point at the entrance to LAnse Bay:

It will be observed, by looking on the map, that the harbor at the bottom of Keneewaw [sic] bay is good for all winds, but it is out of the way. It is proper, however, to notice its connexion [sic] with the statement we have just made, and to say that if a small light were placed at the entrance of the harbor of lAnse it would convert it into a safe harbor of refuge in all weathers, at night as well as by day. The light should be placed on the northwest point of the entrance; this is the turning point into the bay, and has, moreover, a sand spit running off from it.

As the bay was indeed out of the way for most vessels, the area didnt see significant growth until plans for a railroad and docks at LAnse were made in 1870. Anticipating the increase in commerce, the Lighthouse Board sent Congress the following funding request for a lighthouse to mark LAnse Bay:

The railroad from Escanaba and Marquette to Ontonagon passes the head of LAnse Bay, and will, for the present, terminate there. Efforts, which will probably prove successful, are now being made to complete the road to LAnse before the close of this season, when the place will at once become an important point for the shipment of iron ore. A good harbor is found at the head of the bay, and it should be lighted. To establish such a light as is needed will require an appropriation of $12,000, which amount is submitted, with estimate.

Congress provided $10,000 for a lighthouse at LAnse on March 3, 1873, but it wasnt until May 1876 that a deed to a parcel on Sand Point, situated on the opposite side of the bay from the Village of LAnse, was obtained. Work at the site commenced on August 1877, using plans that called for a rectangular, one-and-a-half-story dwelling with an eight-and-a-half-foot-square tower centered in its lakeward-facing gable. The lighthouse was built of red brick, and wooden stairs in the tower provided access to the lantern room and to both floors of the five-room dwelling. Nearly identical lighthouses were built at Sherwood Point in 1883 and at Little Traverse in 1884.

The tower at Sand Point measures thirty-six-and-a-half feet from base to ventilator ball, and its octagonal lantern features a wooden lower part, a cast-iron upper part, and a copper and zinc roof. A wooden door in the lantern room provides access to the gallery, which is encircled by a wooden balustrade. A lamp with a ruby red chimney was used inside a fifth-order Fresnel lens, manufactured by L. Sautter & Co. in France, to produce a fixed red light at a focal plane of thirty-nine feet above the bay.

The following article appeared in the LAnse Sentinel on February 27, 1908:

It is with a degree of considerable sadness that we are called upon this week to chronicle the serious illness of John B Crebassa, one of the oldest and best known citizens of the Lake Superior region. For some time past Mr. Crebassa has been suffering from a complication of ailments but has until recently, been able to be about and attend to his duties. During the fore part of the week he has been compelled to cease and remain at home under special care of his physician. Few men are better known than Mr.Crebassa as his position as a light house keeper in the Lake Superior region for the past forty-five years has brought him in touch with men of prominence from many places. He has made for himself a name which many might be proud of, and it is with a sincere hope of his large circle of friends that his present condition is not of a serious nature as supposed and that he will again be able to start his lamps in the tower this spring, as he was wont to do in the many years past.

Crebassas illness turned out to be serious indeed, as the well-liked keeper passed away just three days after the article was printed. Anna Crebassa cared for the light for a few weeks at the opening of navigation in 1908 before Thomas G. Thompson was transferred in from the Eagle Harbor Range Lights.

In 1894, some eighty feet of sidewalk were laid to link the dwelling with the stations outhouse and boathouse. Sand Point Lighthouse was jacked up in 1897 and moved back 200 feet from the shoreline on account of erosion. A wall of hemlock timber was then placed around the lighthouse, and the intervening space was filled with sand.

Inspector Oliver G. Brown visited Sand Point in 1910 and made the following recommendations: A chimney should be built in privy to carry off fumes. There is none at present & in warm weather stench becomes offensive. Beach is washing away steadily. Some precaution should be taken to prevent this wash or dwelling will be in danger again.

Richard Thompson, the fourth keeper of the light, served from 1911 until 1922, when an acetylene light was established atop a pipe mast rising above a small redbrick tank house, situated thirty-seven yards east of the lighthouse. The new light had a focal plane of thirty-five feet and produced a white flash every three seconds.

No longer needed, Sand Point Lighthouse was sold off, and one of its owners added the enclosed porch on the south side of the structure. Louis Guy, a local dentist, was one of the lighthouses private owners. The Keweenaw Bay Indian Community purchased the lighthouse and surrounding property in 1994 and has since used the building for offices. The community recognizes the potential the lighthouse has a tourist attraction but has yet to allocate funds for its restoration.

The current light at Sand Point, a white flash every four seconds, is displayed from a square, skeletal tower on the point.

For a larger map of Sand Point (Baraga) Lighthouse, click the lighthouse in the above map.

From the intersection of Highways 38 and 41 in Baraga, go north on Highway 41 for 0.7 miles and look for a road on the right just past the Department of Natural Resources building. Take the road to the first fork where you will take a right. At the next fork take a left and drive to Sand Point Lighthouse.

The lighthouse is owned by Keweenaw Bay Indian Community and is part of Ojibwa Recreation Area. Grounds open, dwelling/tower closed.