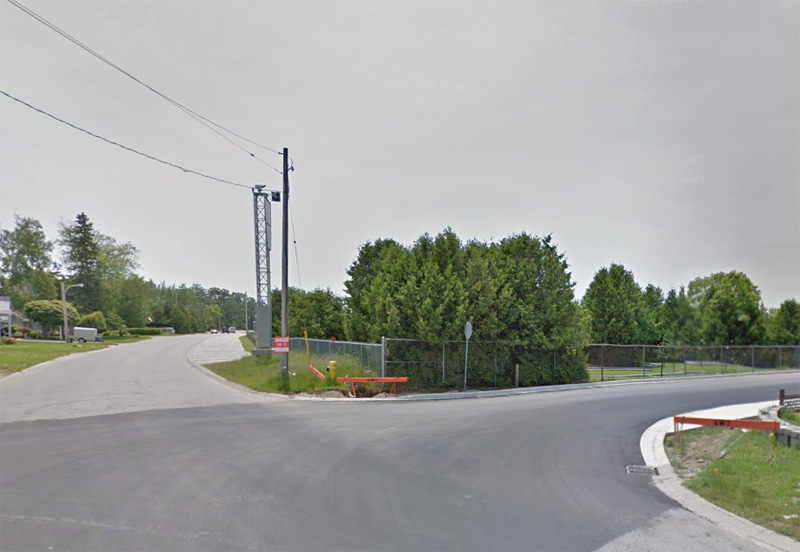 Port Elgin has a small, artificial harbour situated in a slight bay that is six kilometres south of Chantry Island Lighthouse and Southampton. In 1857, the Province of Canada allocated £1000 for the improvement of the harbour at Port Elgin. Of this amount, £250 was for connecting the detached pier, which had been built by local parties, to the shore, and the rest was to be applied in such manner as may be ascertained to be productive of most benefit.

In 1885, the municipality of Port Elgin established lights to mark the harbour. In 1896, the government of Canada assumed maintenance for the two pairs of range lights at Port Elgin, and Robert M. Lowry was hired as their keeper at an annual salary of $60.

When approaching Port Elgin from the south, mariners would first use the south range until the breakwater was reached, and then use the north range to reach the wharf. In 1921, the south range consisted of a fixed white light exhibited from a small tower with a white shed at its base that was located on the shore 360 metres from the southern end of the government wharf. The corresponding rear light was fixed red and was shown from a white, square tower located 45 metres inland from the front light.

Port Elgin North Range Lights consisted of a fixed white light exhibited from a lantern on the corner of the shed on the northern end of the government wharf and a fixed red light displayed from a mast with a shed at its base on the shore 200 metres from the front light. A white daymark in the form of St. Andrews cross was placed atop the freight shed where the front north light was located, and a white, diamond-shaped daymark was attached to the pole from which the rear north light was shown.

Keeper Lowry, who was born in 1848, was responsible for the lights from 1896 until at least 1923, so he was tending them well into his seventies. In 1923, Keeper Lowrys annual salary was $240, triple what it was when he started serving as keeper.

In 1930, owing to a change in the channel, the back light of Port Elgin North Range was discontinued and the daymark at the front light was removed. In 1935, a new set of range lights was established to replace the north and south range. A fixed green light was displayed from a pole near the north end of the wharf to serve as the front light, and a second green light was displayed from another pole 160 meters inland to served as the back light.

In 2021, the range lights at Port Elgin consisted of a cylindrical mast displaying a fixed green light near the outer end of the wharf as the front light and a square, skeleton tower displaying a fixed green light 145 metres inland for the rear light. Lights exhibited from cylindrical masts were also being used to mark the ends of the north and south breakwater at Port Elgin.

For a larger map of Port Elgin Lighthouse, click the lighthouse in the above map.

Modern range lights mark the entrance to the harbour today, and lights are also located at the ends of the breakwaters forming the harbour.