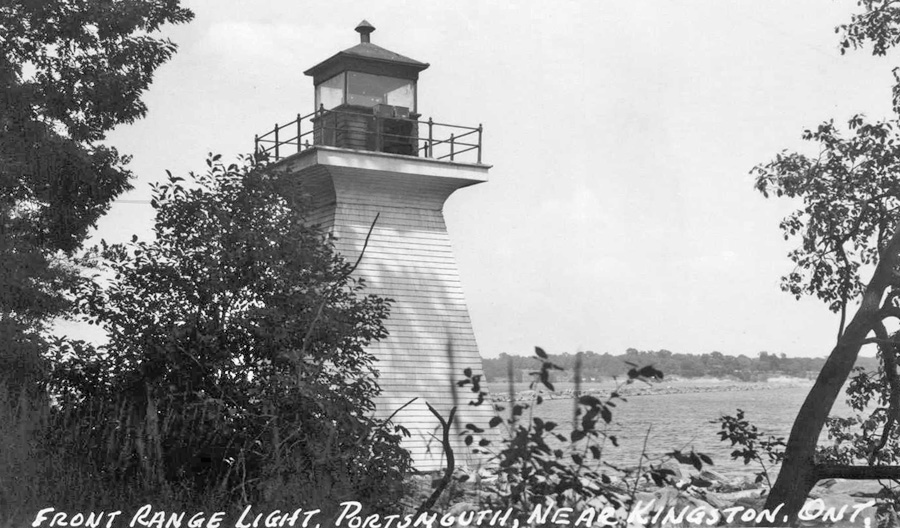 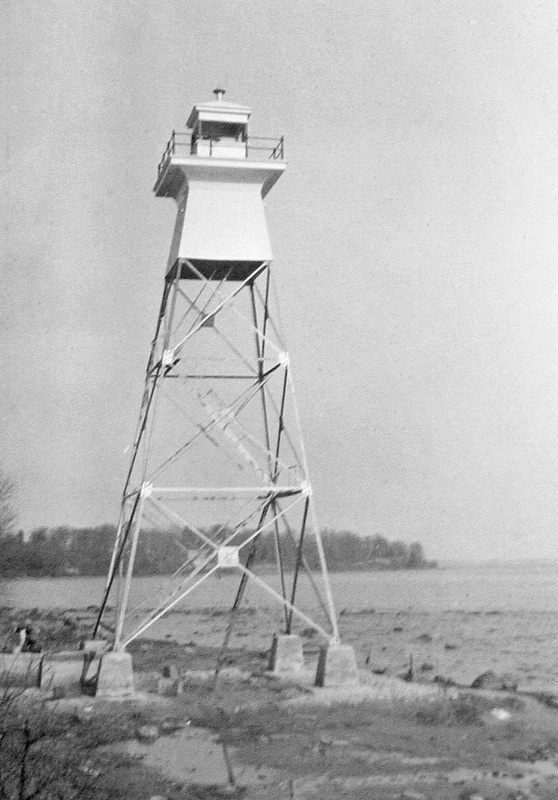 In 1911, day labour, under the direction of M.J. Egan, erected a square, wooden tower to serve as a front range light at Portsmouth, and day labour, under the direction of T.H. Brewer, constructed a skeletal, steel tower to serve as a rear range light. Goold, Shapley, & Muir provided the steelwork for the rear tower at a cost of $498.80, and the coast of constructing the towers came to $1,632.89.

The following Notice to Mariners announced the establishment of Portsmouth Range Lights:

On the opening of navigation in 1912 two range lights will be established at Cataraqui Bay, near Portsmouth, Lake Ontario, to lead through the channel between Seven Acre (Melville) Shoal and the Middle Ground.

Front Light  The front light will be a 4th order, dioptric, fixed white light, exhibited 32 feet above the water from an enclosed wooden tower, square in plan, with sloping sides, surmounted by a square lantern, the whole painted white, erected on the eastern extremity of Carruthers Point, western side of Cataraqui Bay. The light will be visible 11 miles in the line of range and down the channel toward Kingston. The height of the structure from its base to the ventilator on the lantern is 33 feet.

Rear Light  The rear light will be a fixed white catoptric light, exhibited 61 feet above the water from a skeleton steel tower, square in plan, with sloping sides, surmounted by an enclosed watch room and a square lantern, erected 3,550 feet 21° from the front light. The height of the structure from its base to the top of the ventilator on the lantern is 64 feet. The steel framework will be painted red and the watch room and lantern white. The light will be visible 13 miles in the line of range.

Directions  In coming down the lake vessels may head for Nine Mile Point or Snake Island Light until the range lights at Cataraqui Bay, which will be known as the Portsmouth range, are in line. The range lights in one lead into the North Channel between Seven Acre (Melville) Shoal and the Middle Ground in not less than 4 fathoms of water. When Snake Island is abeam the range may be left and a course shaped to lead northward of Penitentiary Shoal.

Edward Graham was appointed the first keeper of Portsmouth Range Lights on April 27, 1912 at an annual salary of $220. Keeper Graham served until 1915, when William Walker assumed responsibility for the range lights.

In 1937, the characteristic of the range lights was changed from fixed white to fixed green, and in 1938, the focal plane of the rear light was somehow raised to 101 feet, though the tower in use was still the original sixty-four-foot-tall tower. In 1960, a white, cylindrical structure with a red top replaced the wooden front range tower, but the skeletal rear tower remained in place.

In 1966, Portsmouth Range was discontinued, and a new range known as Carruthers Point Range was established nearby. The front light was displayed at a height of fifty-five feet from a tower with an orange, triangular daymark having a black vertical stripe. This tower was placed on the southwest tip of Carruthers Point instead of the east end of the point where the previous front tower stood. The rear light was displayed from the window of an elevator at a height of 115. The characteristic of the new lights was fixed red, and the angle of bearing for the new range was 46° instead of 18° as in the old range.

In 2021, a white cylindrical tower with an orange triangular daymark was displaying a sector light on Carruthers Point. This light is green from 41° to 45°, white from 45° to 46°, and red from 46° to 51°, with the white sector indicating the preferred channel.

For a larger map of Portsmouth Range (Carruthers Point) Lighthouse, click the lighthouse in the above map.

The modern light can be seen at the southwest tip of Carruthers Point.