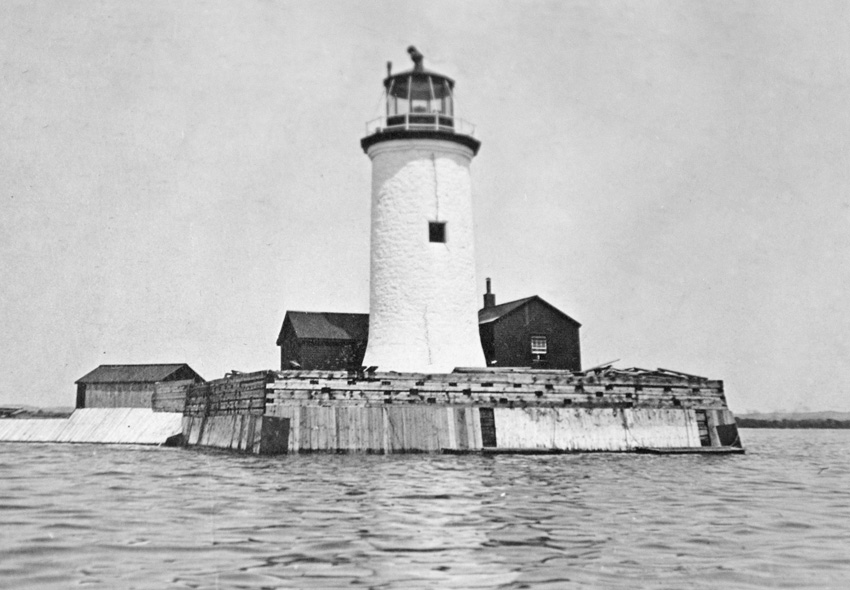 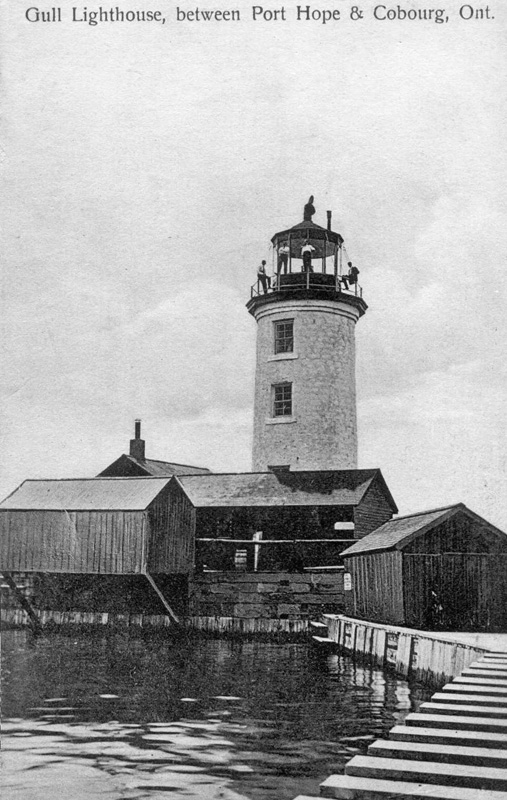 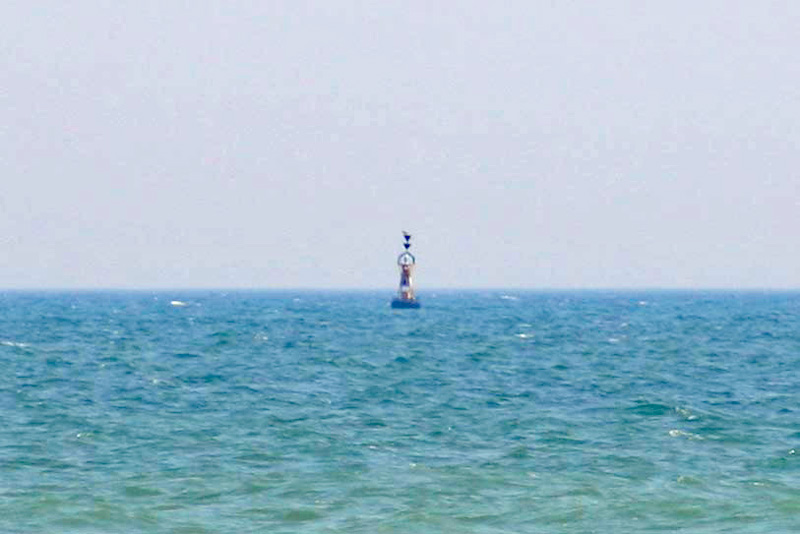 Peter Rock, formerly known as Gull Island, is now a submerged obstacle to mariners that lies roughly two kilometres off the mainland, between Cobourg and Port Hope on Lake Ontario.

On June 1, 1837, the three commissioners appointed to superintend the construction of a lighthouse on Gull Island called for tenders to be submitted at Port Hope before the first of the following month. Four tenders for the work were received, ranging from £1400 to £625. After David Smith, the lowest bidder, declined to supply the required sureties, a contract was entered into with McLeod, Logan, and Co. for £1095. By the end of 1837, the contractors had completed the stonework of the lighthouse. The contract called for the lighthouse to have been completed by October 25, 1837, but due to much unfavourable weather, this was not possible.

This was not the first attempt to construct a lighthouse on Gull Island. Francis Hall had drawn up plans for a lighthouse in 1835, and a contract for its construction had been awarded to John Brown. Brown spent nearly £1000 in procuring materials for the lighthouse before his contract was canceled. By July 1837, Brown claimed there was sufficient stone on Gull Island to complete the work.

The following description of the proposed lighthouse appeared in the Coburg Star on June 21, 1837 as part of the call for tenders:

The Tender to be circular and 28 feet in diameter at the base, and 50 feet high, the foundation to be excavated  into the solid Limestone Rock. The basement to be solid stone work of 8 feet in height, the external surface to the worked to an external radius of 70 feet  All external surface to be set  with prepared Roman or water cement  All to be backed with good flat bedded hammer dressed stone, in regular courses, either of one or two thickness, to correspond with the radius and level of front course, no course to be less than 6 inches, and none more than 8 inches, every stone to be laid flush in well made mortar, and every course properly backed, grouted and leveled with the first course, before another is begun

The Platform to be 20 feet in diameter and 15 feet thick; composed of sound, well seasoned timber of the most durable nature  Lantern. The top to be 70 feet above the foundation; the base to be an octagon, 8 feet in diameter; to be securely rabbited into the upper surface of the platform, and neatly coated with lead, as also the dome, 5 feet in height.

The framework and sashes to be composed of clean, well seasoned stuff, Glass to be best plated, run with vermillion, to show a blood light. The interior fitted with an Iron Chandelier, to contain thirteen lights, to have thirteen patent reflectors, each 16 inches in diameter, with fixtures and apparatus; ties and braces corresponding generally with the Lantern at Point Peters, Lake Ontario.

The commissioners in charge of the construction of the lighthouse decided to substitute a stone platform instead of the wooden one described in the original specification. The lighthouse was finally finished and placed in operation in 1840 with William Owston, Jr. serving as the first keeper. As the lake water would rise and fall within the tower, Keeper Owston was able to accurately record variations in the level of Lake Ontario. His measurements were published in various records of the time. When the lighthouse was built, there was around an acre of ground surrounding the tower, but over the next decade, much of the land disappeared. Some thought the island sank, but one individual noted that when the water was high, it would freeze around the tower, and then when the ice broke up in the spring, it would carry away large chunks of the island. By this process, the island had been decapitated and turned into a shoal.

In 1845, construction of a keepers dwelling for Gull Island was about to begin. George Roddick became the second keeper of Gull Island Lighthouse in 1849. He served through 1871, when he was superannuated at the age of sixty-eight with a pension of $204.24. Robert Roddick was appointed keeper on March 23, 1872 at an annual salary of $500.

The need for a construction of a pier to protect Gull Island Lighthouse was noted as early as 1858. By 1861, the protection work built around the tower was rotten and in an altogether ruinous state; leaving the building exposed to the incessant action of the waves. The construction of a line of cribwork around the tower was therefore proposed in 1861 with a landing placed in it on the side facing the shore at a cost of $1,700. Extensive repairs to the pier were carried out in 1871, at which time it was noted that the light was one of the best on the lakes.

In 1864, the lamps at Gull Island Lighthouse were adapted to use coal oil instead of the more expensive sperm whale oil.

Arrived at Gull Rock Lighthouse at 3 a.m., 6th July, and landed supplies. This lighthouse is a stone circular tower, 48 feet high from base to vane; it is surrounded by a pier built on the rock. The lantern is 8 feet in diameter constructed of iron, sixteen lamps, seven mammoth flat-wick and nine No. 1 base-burner lamps, with 17-inch reflectors, and shows a fixed white light, which can be seen 20 miles.

This lighthouse is kept in excellent order. Robert Roddick, the keeper, has a family of seven.

The ventilator requires repairs; instructed the keeper to have it repaired as soon as possible. During last closed season a new oil house has been constructed at this Station, on the breakwater; it is 19 feet 10 inches long, by 9 feet 10 inches wide, and is of great service, as it relieves the lighthouse of the tanks that were placed in it, thus lessening the danger from fire. The piers at Gull Rock required extensive repairs, 10 toise of stone ordered last year were put in the piers; the repairs are going on as fast as the weather will allow. The main pier around the lighthouse will require replanking as the deck is quite rotten; some oak planking is required on outside of piers to protect them from ice. The lighthouse requires pointing and whitewashing; a boat house for keepers use is much wanted on the main shore. A new lantern for this lighthouse is very much required.

In 1906, a fourth-order lens replaced the ring of eleven reflectors and lamps previously used in the lantern room. This changed the characteristic of the light to an occulting light that was alternately visible for ten seconds and eclipsed for five seconds. James Roddick replaced Robert Roddick as keeper in 1907, becoming the third member of the Roddick family to look after the lighthouse. James and Robert were both sons of George Roddick. Robert was born in 1827 and James in 1853. The 1871 Census has Robert as the oldest child in the household of George and Janet Roddick, with James the youngest of the nine children listed.

The Department of Marine reports switched from calling the station Gull Island to Peter Rock in 1910.

Samuel Nichols succeeded James Roddick as keeper in 1914 and served until the station was automated in 1919. In 1917, the protection pier around the lighthouse was built in concrete and an iron railing was installed on the pier. On November 12, 1918, the light on Peter Rock was changed from a white oil light to an unwatched white gas light, occulting at short intervals. This changed was made permanent in July 1919.

Peter Rock Light was electrified in 1946. In 1958, a new steel tower replaced the historic stone lighthouse on Peter Rock. This change reduced the height of the light from 45 to 40 feet, but the characteristic of the light remained flashing white.

In 2021, a lighted buoy was marking Peter Rock.

For a larger map of Peter Rock (Gull Island) Lighthouse, click the lighthouse in the above map.

The buoy that marks Peter Rock today is best seen by boat.