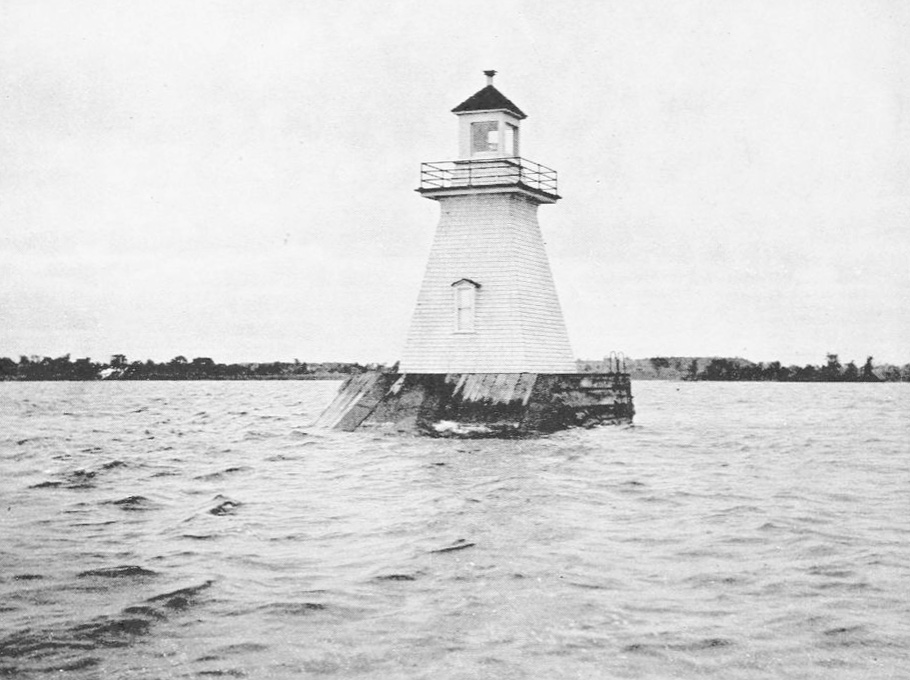 A canal to link the western end of the Bay of Quinte to Presquile Bay was proposed as early as 1796. The government of Upper Canada set aside the needed land, but the Welland Canal and Rideau Canal were deemed more important, so construction of Murray Canal did not start until 1882. Problems with unstable banks delayed completion of the canal until 1889.

Murray Canal has a length of eight kilometres (five miles), a width of eighty feet on the bottom, and when it opened in 1890, it had a depth of twelve-and-a-half feet. At each end of the canal, cribwork piers were built out on both sides, and a system of lighted beacons and buoys marked the approaches. During the first ten weeks Murray Canal was open, 264 vessels passed through it.

With the increase of traffic in the western end of the Bay of Quinte due to the opening of Murray Canal, a navigational aid was needed to guide vessels through The Narrows, which ran between Prince Edward County and Nigger Island, which was renamed Makatewis Island in 1966. In 1892, the Department of Marine established a temporary light to meet this need:

In consequence of the opening of the Murray Canal and the resultant increase of traffic, urgent demands were made for a light in the neighbourhood of Nigger Island; in the Bay of Quinté, at a point where the channel is narrow and intricate. It was not considered desirable to establish a permanent light at this point until a hydrographic survey of the bay should determine with exactness the proper location for such an aid to navigation, but partly as an experiment a temporary pole light has been established on the north point of Potters Island on the Prince Edward shore, opposite Nigger Island. The light, which is fixed white, shown from a tubular lantern hoisted to the top of a mast 20 feet high, was put in operation on the 22nd June last. It is elevated 22 feet above the water level and should be visible nine miles from all points of approach seawards.

William P. Anderson, chief engineer of the Department of Marine, personally supervised a hydrographic survey of the Bay of Quinte from Murray Canal to Centre Brother Island in 1893. The survey showed that the temporary light established on Potters Island was not in the best location to lead through the narrow and critical channel that ran between Makatewis Island and Potters Island. Instead, Anderson recommended that a light should be built on a pier on the shoal that extended to the southwest from Makatewis Island. Plans and specifications for the lighthouse were prepared, and a $2,000 contract for its construction was awarded to William J. Gates of Kingston, who submitted the lowest tender.

The following description of the new lighthouse appeared in the Annual Report of the Department of Marine for 1894:

During last winter Mr. Wm. J. Gates successfully completed his contract for the erection of a lighthouse on a pier on Nigger Island shoal, in the Bay of Quinte, and the new light was put in operation on the 6th June last.

The total expenditure in connection with the establishment of this light has been $2,149.85. The light is fixed white, elevated 27 feet above the level of the bay, and should be visible 10 miles from all points of approach. The illuminating apparatus is dioptric of the seventh order. The lighthouse is a square wooden tower, surmounted by a square wooden lantern, the whole painted white. It is 27 feet in height from the deck of the pier to the top of the lantern. It stands upon a crib-work pier sunk in 11 feet of water on the north side of the steamboat channel.

In consequence of the establishment of the light on Nigger Island shoal, as above described, the mast light temporarily maintained on the north point of Potters Island was no longer required and was discontinued.

Carson Jeffrey served as keeper of the light, which is now known as Narrows Shoal, from 1894 until 1920, when the fixed white light was changed to occulting white and was made unwatched. During this period, his annual salary rose from $200 to $420.

In 1927, a lantern on top of a pole replaced the square, wooden lighthouse. In 2021, a white cylindrical tower with a red upper portion was displaying a flashing red light from a circular pier. This light is listed as Narrows Shoal on the Canadian Coast Guards List of Lights.

For a larger map of Narrows Shoal Lighthouse, click the lighthouse in the above map.