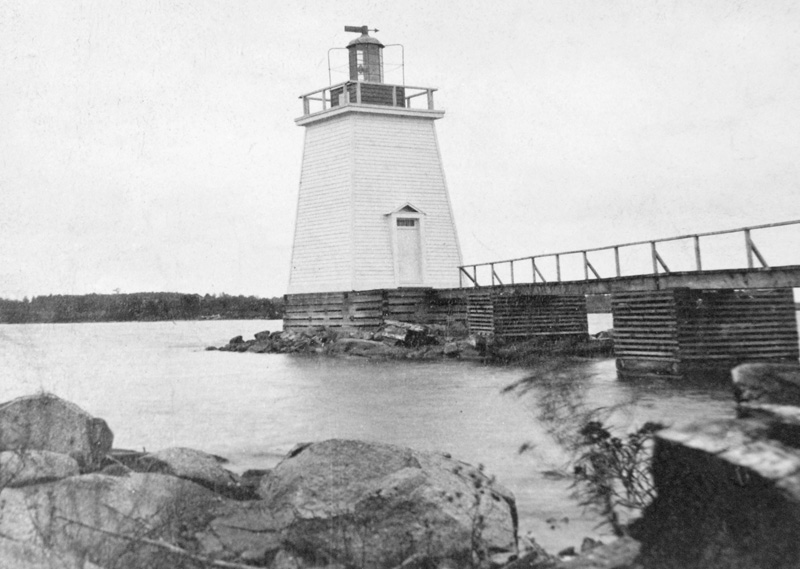 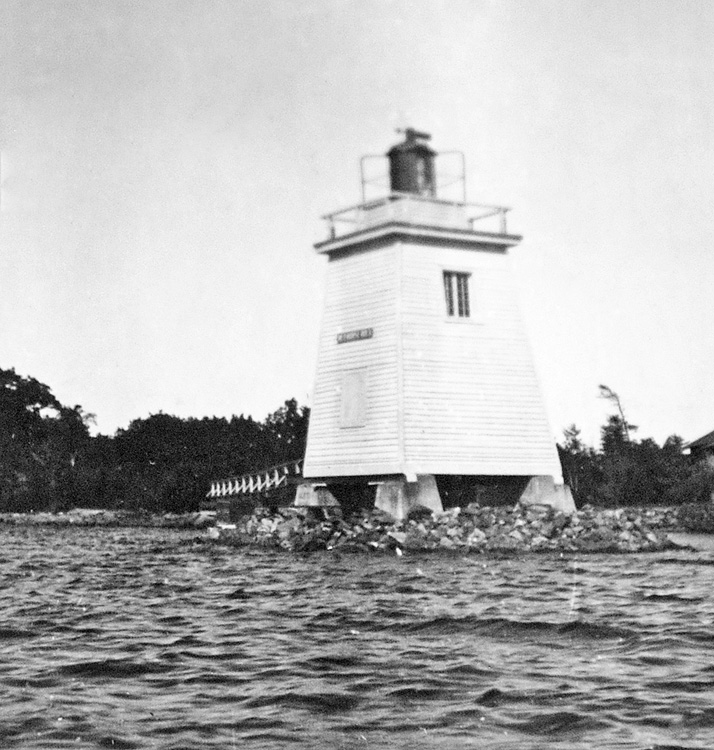 The following report on the two lighthouses appeared in the Annual Report of the Department of Marine for 1876:

In the former there are two dual-burner fountain lamps on a circle, and no reflectors. The lantern is three feet in diameter; glass 14 x 16 inches. The tower is 22 feet high from the ground, and 14 feet square, while the light is 28 feet high. It is very well kept. Red Horse Rock Lighthouse is of the same description, and has the same number of lamps and no reflectors. They are both on piers, and are under the care of the same keeper. As they require painting, I left paint and oil for the purpose, and the painting is now in progress.

New cribwork was built under Red Horse Rock Lighthouse just prior to the opening of navigation in 1888 at a cost of $207. In 1890, the cribwork foundation of Spectacle Shoal lighthouse was rebuilt from the waters edge at a cost of $180.

In 1880, the Annual Report of the Department of Marine noted: By Order in Council of the 10th August last, Mr. William Jackson was appointed keeper of the lighthouses at Spectacle Shoal and Red Horse Rock, at a salary of $400 per annum, in the room of Mr. John Buck, superseded. Keepers could be dismissed for a variety of reasons including negligence, absence without leave, and political partisanship.

In February 1880, the Gananoque Reporter noted that the Department of Marine and Fisheries was investigating charges against Keeper Buck in an article entitled Great Buck Hunt. On July 17, the paper reported that Keeper Buck had been dismissed for leaving the light without permission and placing intemperate and improper persons in charge of the lights on multiple occasions. There seems to be but one opinion on this matter among the people of Gananoque of both political parties, the article stated, and this is, that Mr. Buck has been most unfairly dealt with, and dismissed without real cause.

William Jackson served as keeper from 1880 until 1901, and then John A. Landon looked after the lights until 1904, when the lights were converted to automatic acetylene lights and responsibility of them was given to Manley Cross, the keeper of Gananoque Narrows Light and Jack Straw Shoal Light. The lights on Burnt Island and Lindoe Island were also automated around this time, so Keeper Cross had charge of six lights in the area.

In 1912, the government decided to place keepers again at the four lights that had been automated, and Abraham Meggs was appointed keeper of Red Horse Rock Lighthouse and Spectacle Shoal Lighthouse. Thomas Ferris, the last keeper of Red Horse Rock and Spectacle Shoal, served from 1925 until his retirement in 1947, by which time the lights had been automated. Keeper Ferris had been in charge of Burnt Island Lighthouse since 1914, so he was actually responsible for three lights after 1925.

A red, skeletal tower replaced the wooden lighthouse on Spectacle Shoal in 1936, and that light was automated at that time. Beaurivage was one of nine islands in the area that were made into St. Lawrence Islands National Park in 1904. In 1965, John Stevens, a park architectural historian, wrote an inspection report on Red Horse Rock Lighthouse and noted that if the lighthouse were to be removed from active duty, the tower should be removed to an island in the park and be preserved. Just two years later, in preparation for celebration of the Canadian centennial, the Coast Guard tied a rope around Red Horse Rock Lighthouse and pulled it off its foundation as part of an effort to beautify the river. In its place, a white circular tower with a red top was placed on the rock.

For a larger map of Red Horse Rock (Beaurivage Island) Lighthouse, click the lighthouse in the above map.

A modern light marks Red Horse Rock today. The light can be seen from the Howe Island Ferry.