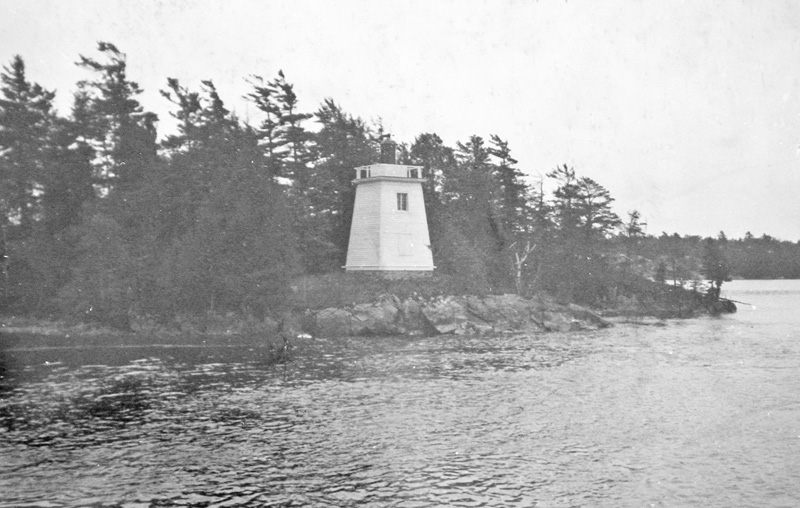 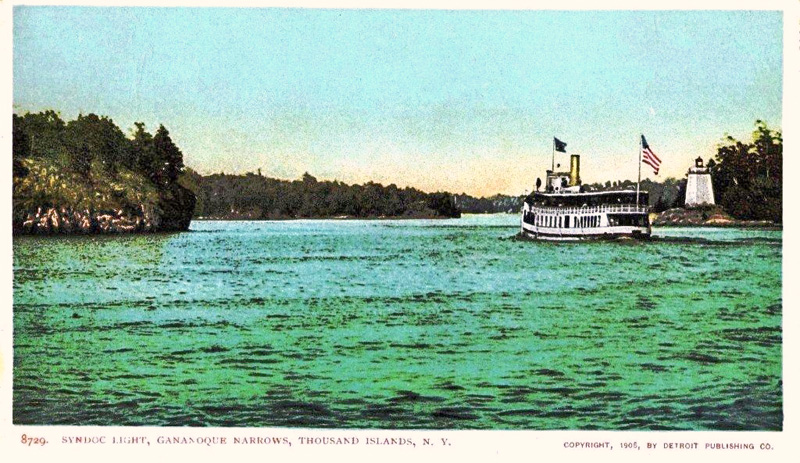 Lyndoch Island is located off the northern shore of Wellsley Island and marks the western entrance to the channel that passes under the northernmost bridge in the Thousand Islands Bridge system, that connects Georgina Island to the Canadian mainland. Lyndoch Island has had many names through the years, including Lindoe, Lindoc, Lindon, Lyndoc, Lyndock, Lynedcok, and Lynedoch. Lindoe Island is the name used in most records concerning the lighthouse built there, but the present light on the island is known as Lyndoch Island Light.

The General Report of the Commissioners of Public Works for 1852-1853 noted that lights had recently been established at Grenadier Island, Fiddlers Elbow, Lindoe Island, Gananoque Narrows, Jack Straw Shoal, Spectacle Shoal, Red Horse Rock, and Burnt Island, permitting the mail boats to operate at night between Brockville and Kingston. The light on Lindoe Island was placed on the northwest point of the island.

Nathaniel Orr served as keeper from 1860 to 1861 and then in 1868 became keeper at Snake Island Lighthouse. John Wallace took charge of the Lindoe Island Lighthouse in 1861 and served for two decades, during which time his salary rose from $140 to $250. The following report on the station was made in 1877:

This Station was visited and supplied on the 7th July. The light is situated on the north-west part of the Island, five miles west of Rockport, and is 40 feet above the water. It is a white square wooden building, and has three No 1 mammoth flat-wick lamps with two 12-inch reflectors; size of glass 14 x 16 inches. The lantern is of iron, three feet square. The lighthouse requires painting, and also a new lantern to be supplied, as the present one is too small; there is plenty of room on the top of the lighthouse for the new lantern. Bolts are also required for mooring a vessel. The dwelling-house requires to be repaired and new eave troughs supplied, which the [keeper] was ordered to have done. Mr. John Wallace is Keeper, and has a family of seven. He keeps the light clean and in good order.

The report for 1878 indicates that the lighthouse and premises were still in very good order, but the size of Keeper Wallaces family had grown to thirteen: a wife and twelve children! The 1881 census shows that seventy-one-year-old John Wallace was employed as a lighthouse keeper and had residing with him his wife Jane, and four adult children: Elizabeth, John G., Sarah, and Alice. John G. Wallace replaced his father as keeper in 1881 and served until the light was converted to an automatic acetylene light in 1904. The following letter was sent to Keeper Wallace on June 23, 1904:

Sir,  I have to inform you that because of the light on Lindoe island, under your charge, being changed from a light burning oil to an automatic acetylene gas light, your services as lightkeeper are no longer required, and that owing to abolition of your office the Minister of Marine and Fisheries recommended to Council that you be placed on the retired list from the 1st July, 1904, with an annual allowance of $138, based on a service of twenty-three years and a salary of $300 per annum.

I have, therefore, to request you to so arrange matters as to be in a position to vacate the light station and give up possession thereof and of all government property under your charge to the department on the 1st proximo.

I am, sir,
Your obedient servant,
F. Gourdeau,
Deputy Minister of Marine and Fisheries

With the conversion of the light to acetylene gas, responsibility for its operation was given to Manley R. Cross, the keeper of Gananoque Narrows Lighthouse. Keeper Cross looked after the six lights in the area through 1907, and then his widow did the same until 1912, when the decision was made to recall keepers for the automated lights. John G. Wallace was thus reinstated as keeper of Lindoe Island Lighthouse in 1912. He served until 1918, and then a pair of men looked after the light in 1919. Andrew Truesdell was appointed keeper of the light in 1920 and served until the light was made unwatched in August 1937.

The characteristic of the light was changed from fixed white to fixed green in 1939, and then when the light was electrified in 1946, its characteristic was changed from fixed green to flashing green. In 1967, the crew of the Coast Guard ship Simcoe tied a rope to the old wooden tower and pulled it off its foundation. The removal of the historic structure was part of an effort to beautify the River for the celebration of Canadas centennial.

For a larger map of Lyndoch Island (Lindoe Island) Lighthouse, click the lighthouse in the above map.