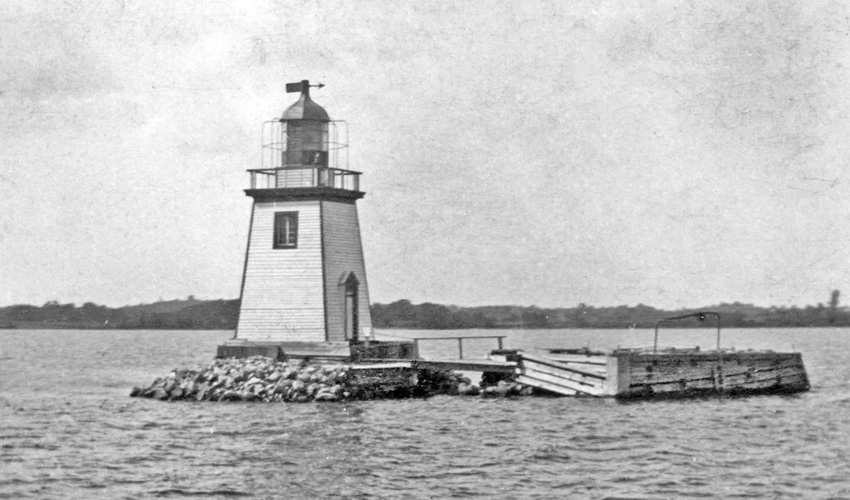 Gananoque Narrows is a passage with a width of only 100 feet that runs between Prince Regent Island and Stave Islands, the former being the northeastern island in the Lake Fleet Group and the latter the southwestern island in the Navy Islands.

The General Report of the Commissioners of Public Works for 1852-1853 noted that lights had recently been established at Grenadier Island, Fiddlers Elbow, Lindoe Island, Gananoque Narrows, Jack Straw Shoal, Spectacle Shoal, Red Horse Rock, and Burnt Island, permitting the mail boats to operate at night between Brockville and Kingston. The light to mark Gananoque Narrows was situated on the eastern end of Prince Regent Island, while Jack Straw Shoal and its light was located three miles west of Gananoque Narrows Light.

Gananoque Narrows Lighthouse was a square, wooden tower that stood thirty-seven feet tall and was capped by an iron lantern that held three flat-wick lamps set in fifteen-inch reflectors. The towers fixed white light was exhibited at a height of forty-four feet above the river. Jack Straw Shoal Lighthouse was of a similar construction, but the tower was only twenty-nine feet tall, and its light had a focal plane of thirty-one feet above the river.

No dwelling was built for the keeper of the lights at Gananoque Narrows and Jack Straw Shoal when the lighthouses were constructed. The need for a dwelling was noted in 1857, but one still had not been constructed in 1876. That year, Darius Smith, superintendent of lights above Montreal, recommended that the keeper be provided an allowance of $80 to offset the amount he paid to rent a dwelling in the vicinity. Smith thought that this would be more economical than constructing a new dwelling, and Keeper Cook said this plan suited him well.

The following report on the lights was made in 1878:

GANANOQUE NARROWS: Arrived off this Station on July 3rd; supplied the stores and oil. The building is a white square tower, showing fixed light, 44 feet above the water. The lantern is of iron, 5 feet 6 inches in diameter, and has three No. 1 base-burner lamps, with 14-inch reflectors. This light is kept in very good order. Cornelius Cook is keeper; has a family of two children and wife.

JACK STRAW SHOAL: This lighthouse is placed on a pier, which is in a very rotten condition, and is kept by the same keeper as Gananoque Narrows Light, and is in all respects the same. The keeper reports that parties encamp on the Island, and make fires, and that he has no authority to put a stop to the practice or prevent it. It is very dangerous during dry weather to this Station. Size of glass of lantern 30 x 36 inches; it is kept in very good order.

In 1881, Jack Straw Shoal Lighthouse was moved thirty-one feet to the north and placed atop a new pier that raised its focal plane three feet. At the same time, the pier on the south side of the channel, distant 700 feet from the lighthouse and which was home to a day beacon, was also rebuilt and a mast and drum were placed on it. John Askwith performed this work under contract for $1,445.

Joshua Legge was placed in charge of the lighthouse in 1885 following the death of Cornelius Cook. Keeper Legge resigned two years later and was replaced by John H. Davis, but Legges association with the lights was not done. In 1892, Joshua Legge was paid $425 to repair the piers for the lighthouse and beacon at Jack Straw Shoal and to improve the lighthouse. Legge elevated the tower, renewed its subsills, and laid a new lantern deck.

Sanford Davis replaced John H. Davis as keeper in 1892. Two years later, on the evening of September 4, a lamp in the lantern room atop Gananoque Narrows Lighthouse exploded, damaging the lantern room and the top part of the tower. While the damage caused by the fire was being repaired, a modern lantern room with larger panes of glass was built, and a seventh-order Chance Brothers lens was placed in it in place of the lamps and reflectors previously used. The lantern room atop Jack Straw Shoal Lighthouse was also equipped with modern plate glass at the same time.

Manley R. Cross was appointed keeper of the lights in 1896 and served until his death, just over a decade later. During this time, he was given a hand-operated foghorn in 1900 that he was required to use to answer the signals of steamers in the vicinity of the station in thick weather. In 1905, the characteristic of Jack Straw Shoal Light was changed from fixed white to fixed red. Keeper Cross was also placed in charge of the lights on Burnt Island, Red Horse Rock, Spectacle Shoal, and Lindoe Island around 1902, after those lights had been converted from kerosene to automatic acetylene lights.

Jennett Cross replaced her husband as keeper of the lights in 1908, and, like him, was responsible for six lights. In 1912, the Department of Marine decided to go back to kerosene (coal oil) in the automated lights, and keepers were recalled to look after them.

Thomas Glover was the last and also longest-serving of the keepers of Gananoque Narrows and Jack Straw Shoal lights. He began his service in 1914, and retired in 1937, when the two lights were automated.

Light Lists show that Jack Straw Shoal Light was electrified in 1947. A circular white concrete tower had replaced the wooden tower at Jack Straw Shoal by 1962, as that was the description of the structure in the Light List for that year. Fire destroyed the wooden Gananoque Narrows Lighthouse in 1967. By that time, the lantern room had been removed.

For a larger map of Jackstraw Shoal Lighthouse, click the lighthouse in the above map.

The modern light that marks Jackstraw Shoal today is best seen by boat.