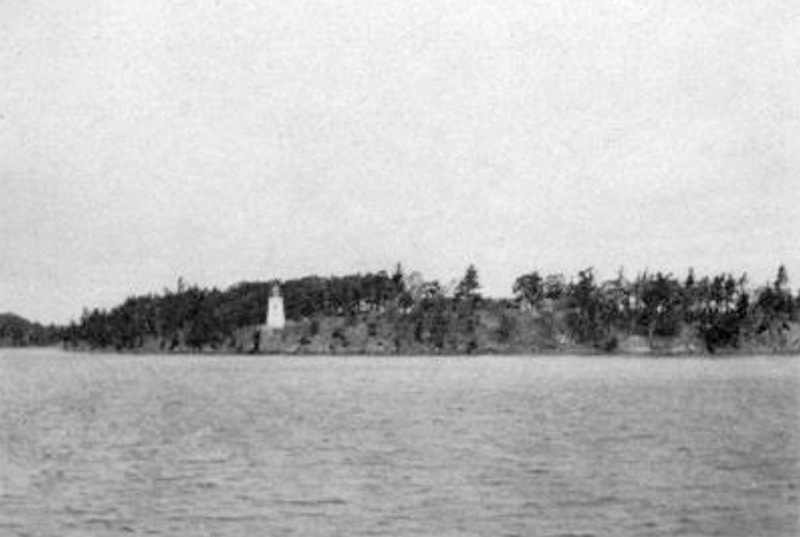 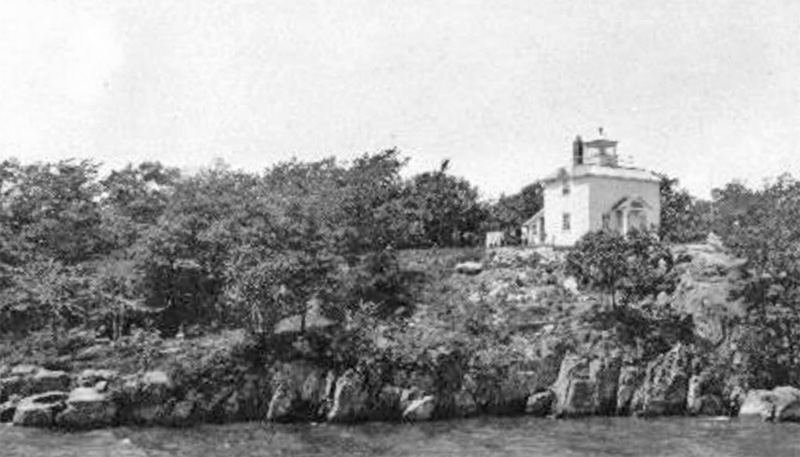 Burnt Island, one of the Thousand Islands in the St. Lawrence River, is a small island situated just off the eastern end of the much larger Howe Island. Burnt Island, which is more commonly known as Aubrey Island today, is the westernmost of a collection of small islands that are located in the river near Gananoque.

Burnt Island Lighthouse was placed on the southeast point of the island and consisted of a square, wooden, tower that stood twenty-six feet tall and exhibited a fixed white light at an elevation of sixty-four feet above the river. Three lamps and two reflectors were initially used in the lantern room, which had a diameter of three feet, to produce the light.

The first keeper of the lighthouse appears to be Joseph Mervin, who served until his death in the fall of 1877. A keepers dwelling was not built on the island when the lighthouse was constructed, and the need for one was noted in 1859. Darius Smith, superintendent of lights above Montreal, visited Burnt Island on July 7, 1877 and provided supplies for its operation. He noted that the tower needed painting, the dwelling needed ceiling with wood and painting, and the cistern needed to be repaired and plastered. Smith recorded that Keeper Mervin was seventy-nine at the time and had a family of seven. Though Keeper Mervin was elderly and would pass away a few months later, Smith found that the light was well kept and in good order.

In 1904, nine islands including Burnt Island were designated St. Lawrence Islands National Park. Docks and pavilions were built on some of the islands, including Burnt Island, for use by the public, and a caretaker was paid to care for the islands. In 1912, the job of caring for some of the islands was added to the responsibility of lighthouse keepers who either lived on an island that was part of the national park or on a nearby island. On May 20, 1912, Keeper Acton was placed over Aubrey and Mermaid Islands and his annual salary was increased by $25 due to this extra responsibility.

In 1916, a new lighthouse was built on Burnt Island in the form of a square, two-storey dwelling with a lantern room atop its roof. Day labour under the direction of J.J. Lindsay built the new lighthouse at a cost of $2,530.97 to replace a keepers dwelling that had been destroyed by fire. The following Notice to Mariners announced the establishment of the new light:

The fixed white light on the eastern end of Burnt Island has been established in a new structure erected on the site of the gas beacon, which has been removed.

The light is exhibited, 64 feet above the water, from a square lantern on the middle of the roof of a rectangular wooden dwelling painted white.

The height of the structure from the base to the top of the ventilator on the lantern is 30 feet.

The light is a 5th-order dioptric light of 175 candlepower, visible 5 3/4 miles.

Thomas Ferris became keeper of Burnt Island Lighthouse in 1914 and served until 1945. During part of this period, he was responsible not only for the light on Burnt Island but also for the lights on Spectacle Shoal and Red Horse Rock along with six islands that belonged to the national park. Keeper Ferris was recognized for the excellent way he looked after the islands and for being a thoroughly conscientious and industrious servant of the government. In a letter dated June 30, 1933, Keeper Ferris provided the following report on the islands after a storm:

I have to advise you that the storm we had on the 28th has done considerable damage to the parks in my charge. A large number of trees are down, and most of them have fallen on top of stoves and pathways. A large oak fell on top on the mens toilet at Beau Rivage, and it is a complete wreck, therefore it will be necessary to have a new one built. And this should be done as soon as possible as the girls are camping on one side of the island, and this leaves only one toilet for the rest of the public. When you are having the toilet built, I would be glad if you could let me have the man for a day or two to get the largest of the trees cleared from the stoves and pathways.

In 1945, Burnt Island Light was automated and its characteristic changed from fixed white to flashing white. The description of the lighthouse also changed around this time to a white wooden tower with a daymark.

In 2021, a white cylindrical mast with an orange upper portion was displaying a flashing red light with a period for four seconds from the east side of the island.

For a larger map of Burnt Island Lighthouse, click the lighthouse in the above map.