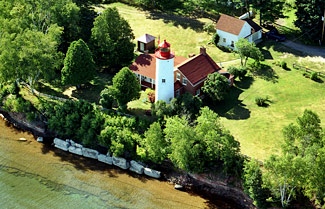 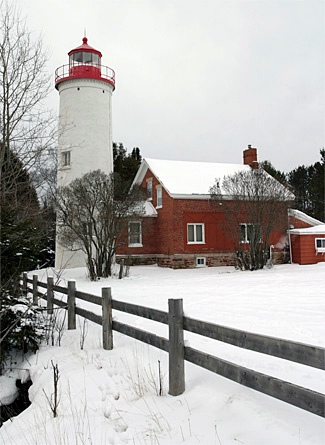 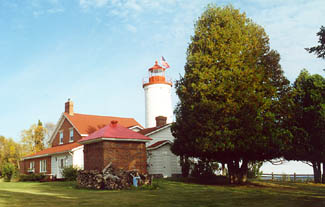 Together Portage River and Portage Lake nearly bisect Keweenaw Peninsula, and in 1846, Ransom Shelden built a store at the north side of the rivers mouth on Keweenaw Bay to supply miners headed inland. The following year, Shelden brought his family to Portage Entry, becoming the first white settlers in the area, and the Independence, the first steamer on Lake Superior, called at the port. In the fall of 1851, Shelden moved inland and established a store, which was the first building in what is now known as Houghton. For his pioneering efforts in settling the area and developing its copper mines, Ransom Shelden is known as the Father of the Portage Lake district. On February 17, 1853, Senator Alpheus Felch, former governor of Michigan, presented a petition to Congress from Ransom Shelden and others, praying the erection of a light-house at the mouth of Portage River. The petition was referred to the Committee of Commerce, which must have given its prompt approval, as on March 3, 1853, Congress appropriated $5,000 for the lighthouse.

A contract for the lighthouse, along with those at Eagle River, Point Betsie, and Pointe aux Barques, was awarded to Alanson Sweet, Luzerne Ransom, and Morgan Shinn on July 17, 1854. Work on the lighthouse on a fifty-seven-acre site just north of the rivers mouth was carried out primarily during the 1855 season. The original lighthouse consisted of a cylindrical rubblestone tower, with a diameter of eight feet, that stood thirty-nine feet tall and was capped by an octagonal, cast-iron lantern room. A one-and-a-half-story dwelling, which measured twenty-nine by twenty-eight feet and had an attached ten-by-twelve-foot summer kitchen, was built adjacent to the tower for the keeper.

A fifth-order, Henry-Lepaute Fresnel lens was mounted in the lantern room along with two flash panels that revolved around the lens every four minutes. Ruby glass screens were affixed to the panels to produce a light characteristic of fixed white with a red flash every two minutes. Michael W. Lyons became the first keeper of the light in September 1856.

Even though it had been rejected by the superintending engineer officer for not being built in conformity to the terms of the contract, Portage River Lighthouse commenced operation in 1856. Howell Cobb, the Secretary of the Treasury, asked that a special agent be sent to visit the lighthouse, along with those at Eagle River and LaPointe that were also in dispute, in order to settle the controversy between the contractors and the engineer. This visit was planned for the opening of navigation in 1858, and the issues must have been quickly resolved, as the Annual Report of the Lighthouse Board for that year specifically mentions that the contested lighthouses, which had been under contract for some years, had been completed.

Like many of the early lighthouses built on the Great Lakes, the first Portage River Lighthouse was ill equipped for the severe weather it had to endure. An inspector in 1868 found the buildings in a dilapidated condition and generated the following list of issues:

The tower is built of rubble stone, with solid walls which are very damp inside. The stairway is of wood, and badly decayed. The lantern leaks, and is too small for the apparatus, having an inside diameter of only four (4) feet.

The dwelling is also built of rubble stone. During wet weather the water stands on the floor of the cellar, and it is damp at all times. The house is very damp throughout, in consequence of which the floors are so badly decayed as to be unsafe. The plastering has fallen off the ceilings and walls in many places. The eaves of the roof do not project beyond the walls.

It is recommended that the tower be provided with an interior brick cylinder, an iron stairway, and a lantern of modern style, with cast-iron deck plate; also, that a new dwelling be built, and that it be connected with the tower by a covered passage-way.

Congress provided $12,000 on March 3, 1869 for rebuilding the lighthouse, and a light was exhibited from a temporary structure during the 1869 shipping season while the old buildings were demolished and a new tower with an attached dwelling was erected. At fifty-one feet, the new tower was substantially taller than the first, and its diameter tapered from fourteen feet at the base to twelve feet at the lantern room. The Fresnel lens used in the original lighthouse was installed in the new towers decagonal lantern room, which was encircled by a gallery and a two-rail balustrade. A ten-and-a-half-foot-long covered passageway linked the tower to the new two-story, eight-room, redbrick dwelling.

Born near Huddersfield, England, where his father had a freestone quarry, George Craig immigrated to Montreal in 1854 and then made his way west to Marquette in 1860. A year later, Craig sailed along the south shore of Lake Superior from Whitefish Point to Ontonagon in a small boat looking for promising sandstone outcroppings. During this daring voyage, he discovered the now famous sandstone near Portage Entry and acquired land about a mile east of the mouth of the river. The small settlement of Craig was formed to support a quarry, whose sandstone was hauled along a narrow-gauge rail to a dock on the river and then barged out to ships in Keweenaw Bay.

The community and quarry at Craig soon lost out to larger facilities at Jacobsville, founded by John H. Jacobs and located just east of Portage River Lighthouse. Perhaps desiring a steady income, George Craig became keeper of the lighthouse in 1878, after John B. Crebassa was transferred to the lighthouse just completed at nearby Sand Point. George Craig minded the light at Portage River for a decade before retiring in 1888 at the age of sixty-nine. A fine example of a building constructed with limestone from the Portage Entry area is Saint Ignatius Loyola Church in Houghton.

A survey of the lighthouse reservation in 1879 revealed that the station was located on private land. After funds were appropriated in August 1882, the land surrounding the lighthouse was purchased the following spring for $700. Now that it owned the lighthouse property, the government forced a county road and a couple of private buildings to be removed from its land in 1889. Corner and boundary stones were then set up to mark the limits of the reservation, and a barbed-wire fence was placed around the property in 1903.

The period between the lights red flashes was cut in half to one minute on August 15, 1891. In 1907, a nine-foot-high and one-hundred-foot-long seawall was built just south of the lighthouse to retard erosion, and seventy-five concrete slabs, provided by the lighthouse depot in Detroit, were used to link the stations various buildings with cement walks. A brick oil house was also added to the station in 1907.

The discontinued Portage River Lighthouse was transferred to the State of Michigan on August 10, 1932, but when the state failed to follow through with its plans, the property reverted to the Coast Guard on October 29, 1948. The lighthouse was subsequently turned over to the General Services Administration for liquidation and ended up being sold at auction on November 25, 1958 to Ray and Sylvia Joynt for $18,251. The property remained in the Joynt family until it was purchased in 2004 by Mike and Cheri Ditty, who run the historic lighthouse as the Jacobsville Lighthouse Inn.

Originally from Minnesota, the Dittys spent their summer vacations sailing on Lake Superior for many years before deciding to purchase a marina so they could be on the water full-time. While looking for a marina, they happened upon Portage River Lighthouse and just couldnt pass up the opportunity. Mike and Cheri operated the lighthouse as an inn until the fall of 2019, when Cheri passed away after a nearly five-year-long battle with cancer. The Dittys placed the lighthouse on the market in 2018, and in 2020, the asking price for the lighthouse was $519,000. A three-bedroom, three-bath outbuilding was available for an additional $145,000, or both buildings plus furniture, maintenance equipment, and a website could be had for $720,000.

For a larger map of Portage River (Jacobsville) Lighthouse, click the lighthouse in the above map.

From Highway 26 in the town of Lake Linden, turn east on 9th Street which will become Bootjack Road. Follow Bootjack Road around Torch Lake and then Portage Lake for roughly 7.5 miles until you come to a fork in the road. Take the left fork, Dreamland Road (Jacobsville Road), and follow it for 8.4 miles where it will tee. Turn left, and after a short distance, you will find Lighthouse Road on your right.