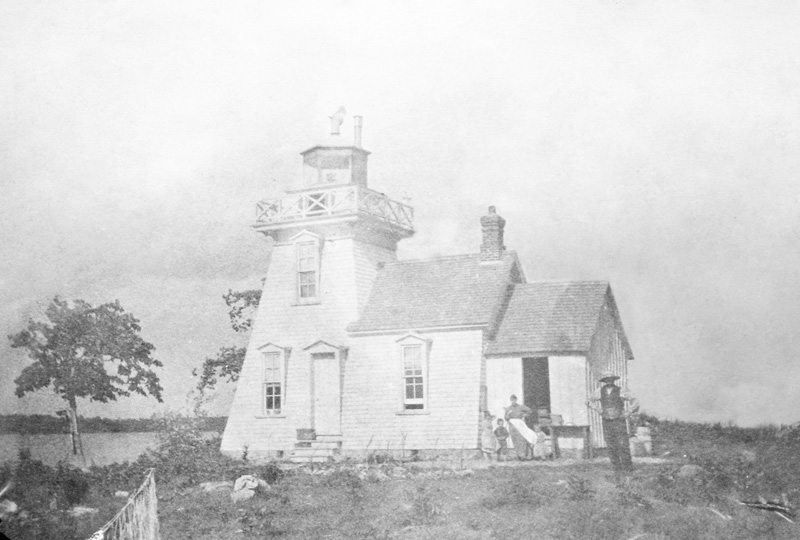 In 1887, a group of individuals interested in navigation on Lake Ontario and the St. Lawrence River sent the following letter to the minister of the Department of Marine and Fisheries:

The Petition of the undersigned Steamboat and vessel owners and masters and others interested in the navigation of Lake Ontario and the River St. Lawrence, respectfully shews, that a Light House is and has been for a long time past much needed, on Lake Ontario about nine miles West of Kingston near the lower gap at the entrance of the Bay of Quinte, on one of the Three Islands called The Brothers, there situated.

There is a great deal of Shoal water in the vicinity and frequent accidents have happened in consequence. Your Petitioners therefore pray that a light house may be placed on one of the said Islands.

The Murray Canal had been under construction since 1882, and with its completion nearing, an increase in navigation in the Bay of Quinte was anticipated. The Department of Marine had plans for a lighthouse on the north point of Centre Brother Island drawn up in 1889, and the project was put out to bid. Ten tenders were received for building the lighthouse, with costs ranging from $3,250 to $1,085. The Annual Report of the Department of Marine for 1890 announced the completion of Centre Brother Island Lighthouse:

The lighthouse on the north point of the Centre Brother Island, on the north shore of Lake Ontario, in the County of Lennox, referred to in last years report, was satisfactorily completed under contract by Mr. Nathaniel J. Leonard, of Westbrook, his contract price being $1,085.

The light was put in operation for the first time on the 15th September, 1890.

It is fixed white, elevated 31 feet above the level of the lake, and should be visible 10 miles from all points of approach. The illuminating apparatus is dioptric, of small size.

The tower is a square wooden building, and, with kitchen attached, is painted white. The iron lantern surmounting it is red. The height from the base to the vane on the lantern is 31 feet.

When William P. Anderson, Chief Engineer of the Department of Marine, called at the lighthouse in June 1891 to install the permanent Chance Brothers anchor lens in the lantern room in place of the temporary light that had been in use, he found that Keeper Filson had hired a Mr. Richards to look after the light. This practice was prohibited, but Keeper Filson argued that the dwelling attached to the square, pyramidal tower was too small for his family and that his own residence was too far away from the lighthouse. Filson had a contractor produce plans for a two-room addition to the lighthouse that would cost $136. While Anderson agreed that the addition was needed and the cost was reasonable, the minister of the Department of Marine and Fisheries refused to approve the work. Keeper Filson agreed to care for the lighthouse himself and served until 1894, when Michael ORourke was placed in charge of the lighthouse.

Daniel Wemp replaced ORourke as keeper and served until 1913, when John Miller was appointed keeper. The final keeper of the lighthouse was Anthony Tryon, who served from 1915 until 1927. An automatic occulting white light was then placed in the lantern room of the lighthouse, which eliminated the need for a resident keeper.

For a larger map of Centre Brother Island (Brother Islands) Lighthouse, click the lighthouse in the above map.