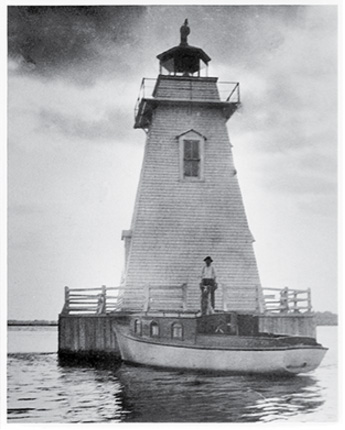 Belleville is situated at the mouth of Moira River on the Bay of Quinte, a lengthy, narrow, Z-shaped bay located on the northern shore of Lake Ontario. Point Pleasant Lighthouse was placed in operation in 1866 to mark the entrance to the bay, but the town of Belleville had built its own lighthouse within the bay in 1851, and an enterprising individual had exhibited a private light before this.

Lumber was an important part of trade at Belleville, and a number of sawmills were built at the mouth of Moira River to support the business. In 1835, Billa Flint, Jr. had a light suspended from the steeple of his new warehouse at the foot of his wharf to guide boats into the harbour.

The town council decided in 1850 that a formal lighthouse would greatly benefit Belleville, and R.F. Davy, mayor of Belleville, sent a letter to the Governor-General at Quebec asking that the town be allowed to build a lighthouse on a shoal at the mouth of the river. Permission was quickly granted, and a thirty-foot-tall, octagonal, wooden lighthouse was built atop a pier on the shoal, which was located at the end of Pinnacle Street.

After fire destroyed Bellevilles lighthouse in 1879, the Department of Marine had a new one built in 1881, as described in its annual report for that year:

A lighthouse in Belleville Harbour, Bay of Quinte, to replace that formerly maintained by the City Corporation which was destroyed by fire in 1879. The light is fixed white, from a small dioptric apparatus, and shows around the whole horizon. It is elevated 38 feet above water mark, and should be seen 11 miles in clear weather. The tower is a square wooden one, 36 feet high, and stands upon an octagonal pier built upon the south-east edge of the shoal at the entrance of the harbour. The sum of $388.67 was expended on this lighthouse during the past fiscal year, and the further cost will be shown in the accounts of the present year.

Belleville contractors Northcott and Alford built the lighthouse, and John Covert was appointed its first keeper on May 20, 1881 at an annual salary of $200. Keeper Covert looked after the light through 1900, and then J.C. Weir took charge of the light in 1901. H.J. Smith followed Weir as keeper in 1912, and he served until 1922, when J.C. Weir became keeper again for two years. M.J. Weir was keeper from 1924 through at least 1937.

On September 5, 1903, the characteristic of Belleville Lighthouse was changed to fixed red instead of fixed white to make it more readily distinguishable from the number of bright lights near the lighthouse. In 1905, day labour, under the direction of W.K. Morris, made repairs to the pier and lighthouse at Belleville at a cost of $107.57.

Fire destroyed Belleville Lighthouse in 1941, and in its place a red, square, wooden tower was placed on the roof of a warehouse at the entrance to the harbour. This new light was also fixed red and was in use through at least 1970.

In 2021, a flashing green light was being displayed from a white cylindrical tower with a green upper portion at the entrance to Meyers Pier Marina. This location is just east of the shoal on which Belleville Lighthouse stood from 1881 to 1941.

For a larger map of Belleville Lighthouse, click the lighthouse in the above map.