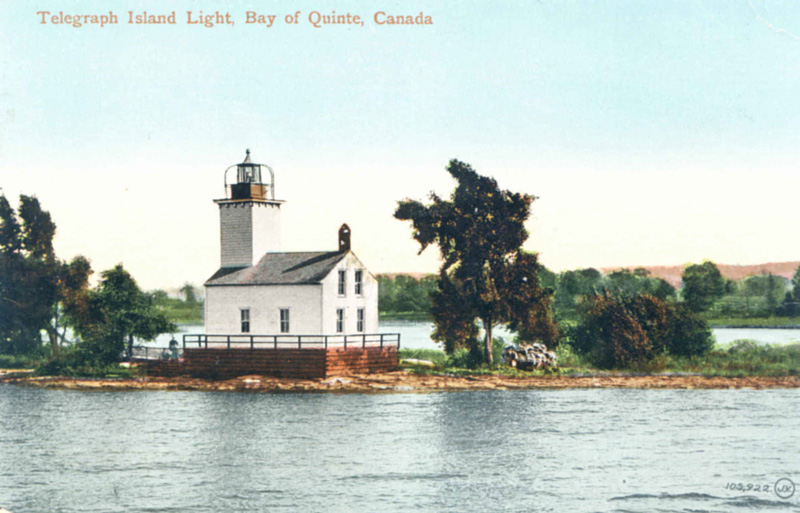 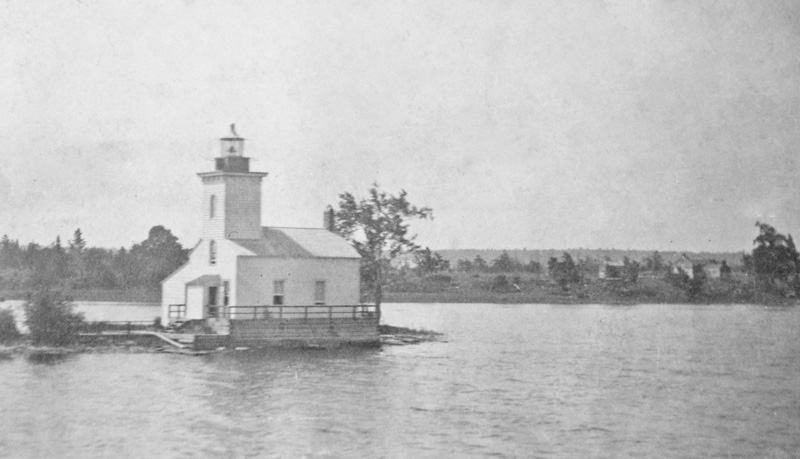 Bay of Quinte is a lengthy, narrow, Z-shaped bay situated on the northern shore of Lake Ontario. Point Pleasant Lighthouse was placed in operation in 1866 to mark the entrance to the bay, and the town of Belleville had built its own lighthouse on the bay in 1851, but other navigational aids were still required. In 1870, the Department of Marine announced the completion of a lighthouse on Telegraph Island, some distance east of Belleville:

A very good minor light was recently established on Telegraph Island in the Bay of Quinte, Lake Ontario. The lighthouse and keepers dwelling are combined. The light is a fixed white light, one shewing a distance of 12 miles, and is elevated 46 feet above the level of the water. It was lighted for the first time on the 12th November, 1870. Numerous applications and recommendations in favour of the establishment of this light had been made to this Department, and there is no doubt it will prove very useful to the local traffic of the Bay and the Belleville trade.

The lighthouse consisted of a rectangular, one-and-a-half-storey dwelling with a square tower rising above one end of its pitched roof. Two flat-wick lamps set in fifteen-inch reflectors were used to produce a fixed white light that could be seen up to ten miles. Parliament appropriated $2,000 for the lighthouse, and Roderick Cameron was awarded a $1,725 contract for its construction. E. Chanteloup and C. Garth & Co. of Montreal provided the lamps and reflectors and other supplies for $266.30, making the total cost of the lighthouse $1,991.35. The cost of the lighthouse was under budget, but then another charge of $125 was made, bringing the actual cost to $2,116.35.

John Mason was appointed the first keeper of the lighthouse at an annual salary of $200. Keeper Mason was born in 1808, so would have been sixty-two years old at the time of his appointment. He and his wife Mary had four children, all of whom were adults by the time Telegraph Island Lighthouse was placed in operation. The 1891 census shows that thirty-six-year-old Annie was living at the lighthouse with her parents. Mary Mason died on April 18, 1895, and her husband died ten days later on April 28. Government records show that Annie Mason was paid $100 for keeping the light on Telegraph Island for several months in 1895, and, given her parents age, it is more than likely that she was the one actually taking care of the light for some time before this.

When Darius Smith, Superintendent of Lights above Montreal, visited Telegraph Island in 1876, he found that the island was all under water and that there was no place to land or safely keep a boat. Smith recommended that a stone wall be built around the station and that this enclosed area be filled in with soil. Keeper Mason offered to carry out the work for $100.

George A. Rowe was placed in charge of Telegraph Island Lighthouse in October 1895, and he served through 1912. In 1900, a seventh-order lens replaced the lamps and reflectors used in the lantern room. M. Benn became keeper in 1913 and kept the light through at least 1924. In 1926, the Lake Carriers Association noted that an occulting white acetylene light, shown from a seventh-order lens lantern and automatically occulted at short intervals, had been placed in the old lighthouse, on the cribwork pier on the north side of Telegraph Island.

Telegraph Island Lighthouse last appeared on the annual Light List as a white, square tower on dwelling on cribwork in 1958. Starting in 1959, the structure on the island was listed as a tower with diagonal shaped daymark. In 2021, a white cylindrical tower with a green upper portion was displaying a flashing white light with a period of four seconds from a pier on the north side of Telegraph Island.

For a larger map of Telegraph Island Lighthouse, click the lighthouse in the above map.

The modern light on the island is best seen by boat.