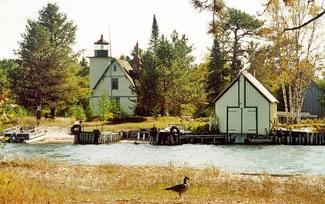 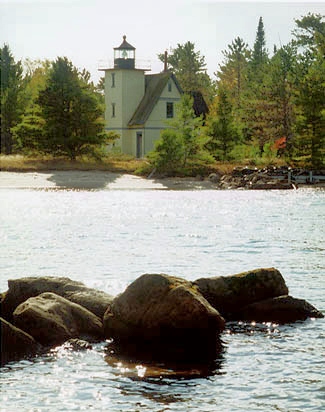 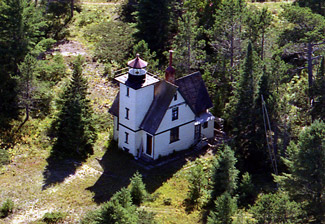 Take a look at the profile of the index finger on your left hand, and you will find that it closely resembles Keweenaw Peninsula, jutting out into Lake Superior. Just below the northeast tip of the peninsula, on what would be the pad of your index finger, is an indentation known as Bete Grise Bay, which affords mariners shelter from the often turbulent waters of Lake Superior. Lac La Belle Harbor Improvement Company was formed in February 1865 to construct a ship canal linking Bete Grise Bay to the lake known as Lac La Belle, and in July of the following year, Congress passed an act giving the company 100,000 acres of surrounding public lands to support the completion of the canal, provided it had a depth of at least twelve feet and a width of one hundred feet. The 4,000-foot-long canal was completed within the two-year deadline established by the government, and parallel piers, over 600 feet in length, were built to keep its entrance in Bete Grise Bay clear.

On March 2, 1867, Congress appropriated $14,000 for a pierhead light to mark the canal, and a deed to a roughly two-acre site for the associated keepers dwelling was obtained on May 9, 1868. The contractor hired for the work agreed to build the station for $11,220 and have it completed by November 1, 1869.

The light, named Mendota after a mining operation on the north shore of Lac La Belle, had an extremely short life. Just months after Mendota Lighthouse was established, the Lighthouse Board made the following announcement in its 1870 annual report:

This light, designed to guide vessels through an artificial cut to Lac La Belle, having been found to be of no use to navigators as a coast light, and as there is no commerce or at present attraction for commercial enterprise, and insufficient depth of water for any freight or passenger vessel navigating Lake Superior, its discontinuance has been ordered from and after the close of the present navigating season.

William Kirby was keeper of the light for the four-and-a-half months it was active.

During the summer of 1871, the crew aboard the lighthouse tender Haze dismantled the wooden pierhead tower at Bete Grise Bay and took it away. Four years later, the tower was retrieved from storage and installed atop the breakwater at Marquette.

In 1892, the Lighthouse Board asked for $7,500 to reestablish Mendota Lighthouse based upon the following need:

Vessels west bound try in the fall to use this point as a harbor of refuge in which to await fair weather before attempting to make the passage around Keweenaw Point. The light formerly there was discontinued in 1870, because of the failure of the local business, and the light tower was moved to and used at Marquette Breakwater. The keeper's dwelling, however, remains at Mendota. With the increase of shipping on Lake Superior, Bete Grise Bay is being largely used by day as a harbor of refuge in gales from the north to the southwest, but at night it is now almost inaccessible. If a light is placed near the head of the bay, it will be of marked advantage in guiding vessels after dark to a safe anchorage.

Bids were obtained for furnishing the material for the construction of this light-station. Contracts were made for the metal work. The material was delivered by the tender Amaranth at the site in September, 1895, and the cook house, quarters for the men, etc., were erected. The old house was torn down, and all the material that could be used in the new structure was cleaned and piled. The foundation of the tower and dwelling was completed and the brick work was laid up to the top of the first-floor joists. The boathouse was almost completed and the fence posts were all set. During October the oil house and the outhouses were completed. The dwelling and all outbuildings, laying sidewalks, etc., were completed in November. On November 30, 1895, a fourth-order flashing white light, varied by a white flash every 45 seconds, was established here.

There are many brick lighthouses that consist of a square brick tower attached to a rectangular, one-and-a-half-story keepers dwelling, but what makes Mendota Lighthouse unique is that its tower is centered on the longer wall, rather than the gable end, and its roof has a very steep pitch. Mendotas tower is nine feet square and rises to a height of just over forty-two feet. The brick lighthouse, which features stone lintels and sills, was originally left unpainted, but by 1908, it was painted buff, which contrasted nicely with its red roof.

On October 31, 1896, the characteristic of Mendota Lighthouse was changed from a flashing light to a fixed white light. A new boathouse was built in 1903, and in 1906 a frame barn was added to the station. In 1907, 110 concrete slabs, made at the lighthouse depot in Detroit, were used to create walkways to link the lighthouse to the various outbuildings.

William G. Jilbert was keeper of Mendota Lighthouse a lengthy thirty-one years, serving from its initial lighting in 1895 until his passing in 1928. William and his wife Harriette raised eight children at the lighthouse, one of whom drowned in the nearby canal when just eighteen months old. In 1918, Keeper Jilbert was commended for rendering assistance to three fishermen whose launch swamped in a heavy sea near the lighthouse.

Mendota Light was converted to electric incandescent in 1929, and in 1933, an unattended acetylene light atop a square, skeletal tower replaced the lighthouse. Heimo (Paddy) Jaaskelainen purchased the lighthouse at auction and cared for it until his death in 1996.

In 1960, a project to create a harbor of refuge for recreational boaters saw the canal dredged and new piers at the Bete Grise entrance built at a cost of $450,000. Post-mounted lights were established at the outer end of each pier, and the 1933 onshore tower was discontinued.

Gary Kohs, owner of Fine Art Models in Royal Oak, Michigan, first saw Mendota Lighthouse on a motorcycle ride in September 1997. During a stop at a gift shop in Eagle Harbor, Kohs learned that the lighthouse was for sale, and he became its new owner the following year. (The asking price for the lighthouse was $500,000). Kohs was able to locate the fourth-order, Henry-Lepaute lens used in the lighthouse, and after the lens was restored, the light was reactivated at 9:45 on July 5, 1998 to the delight of roughly 1,000 onlookers. I am so happy, said Gary Kohs at the relighting. I am so thrilled. Isnt it wonderful?

Car horns and fireworks greeted the flipping of the switch that started the 250-watt bulb flashing once every twenty seconds inside the Fresnel lens. Visitors from as far away as India and Tanzania were on hand for the relighting.

Located at the southern side of the entrance to Lac La Belle from Bete Grise Bay, near the tip of the Keweenaw Peninsula.
Latitude: 47.3742, Longitude: -87.9669

For a larger map of Mendota (Bete Grise) Lighthouse, click the lighthouse in the above map.