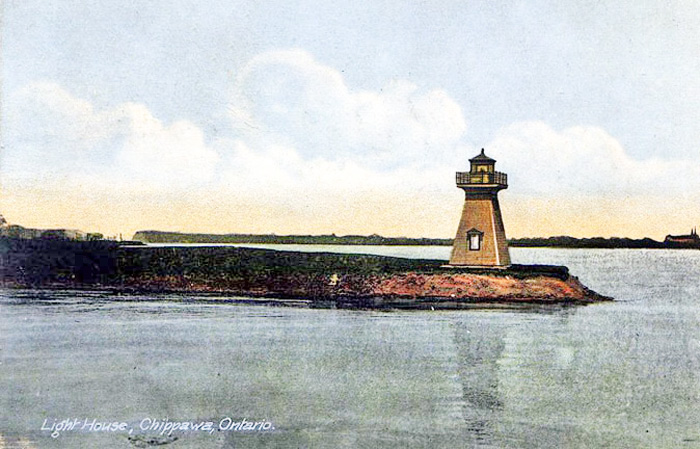 Welland River flows east through the middle of the Niagara Peninsula that separates Lake Ontario and Lake Erie before joining Niagara River at Chippewa. Between 1825 and 1829, workers dug Chippewa Cut at the confluence of Welland River and Niagara River, forming Hog Island (also known as Hogg Island). The cut was part of the first Welland Canal that connected Lake Ontario at Port Dalhousie to Niagara River.

In 1912, the Department of Marine paid James Harriman of Niagara Falls to construct a lighthouse on Hog Island consisting of a thirty-three-foot-tall, square, wooden, pyramidal tower surmounted by a square lantern room. Albert Greenwood was hired as the first keeper of the lighthouse. He served until 1920, when J.A. Greenwood took charge of the light.

In 1924, an ornamental iron pole that displayed a fixed red light replaced the wooden lighthouse that had been displaying a fixed white light. By this time, construction of the intake structures for the Chippawa-Queenston Power Canal had removed most of the south bank of the island. In the 1950s, Ontario Hydro, as part of the construction of the intake structures for the tunnel to feed the Sir Adam Becky Hydroelectric Generation Stations, filled in the channel north of the remnants of Hog Island, joining it to the mainland.

In 2021, a mast displaying a flashing red light was still marking the north side of the entrance to Welland River. The Hydro-Electric Power Commission of Ontario is responsible for the light.

For a larger map of Chippawa (Hog Island) Lighthouse, click the lighthouse in the above map.

The modern light can be seen at Kingsbridge Park.