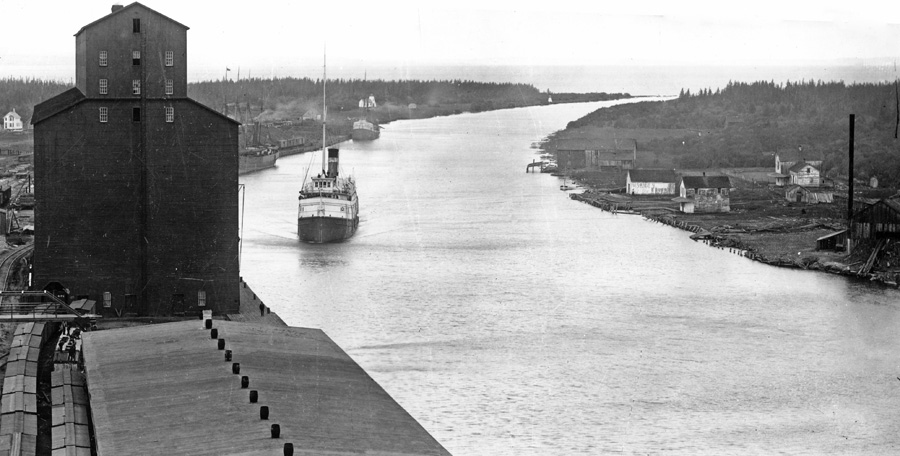 Thunder Bay is a large bay on the northwest shore of Lake Superior that is about fifty kilometres long and twenty-two kilometres wide. An early settlement on the bay was named Prince Arthurs Landing in 1870 to honor Prince Arthur, Queen Victorias son, who was then serving with his regiment in Montreal. In May 1883, officials of the Canadian Pacific Railway renamed the town Port Arthur.

The Town of Fort William, situated at the mouth of the Kaministiquia River, was officially created in 1892, but the area had been known as Fort William since 1807, when a fur trading post was given this name after William McGillivray, chief director of the North West Company from 1804 to 1821. Between 1875 and 1882, a railroad was built linking Fort William and Winnipeg. The Canadian Pacific Railway, preferring the low-lying lands along the lower Kaministiquia River over the exposed shores at Port Arthur where a breakwater would be needed to protect the shipping wharves, consolidated all of its operations to Fort William. Port Arthur and Fort William amalgamated in 1970 to form the city of Thunder Bay.

Kaministiquia is an Ojibwe word that means where a stream flows in island and refers to two large islands, McKellar Island and Mission Island, at the mouth of the river. The island produces three outlets named, from north to south, Kaministiquia River (or Kam River by locals), McKellar River, and Mission River.

Shortly after the government of Ontario established a set of range lights to guide vessels into the lower part of the Kaministiquia River, the Department of Marine decided in 1874 to reimburse the amount spent on the construction of the lights and assume responsibility for their operation. Donald Morrison was hired as the first keeper of the range lights and served under the direction of John McIntyre, governor of the Hudsons Bay Companys post at Fort William.

On November 14, 1875, fire destroyed the inner range light, and a contract was subsequently given for the construction of a new lighthouse for $996. A temporary light in the form of a triangle with a small lantern on it was used for the inner light, while a Grand Trunk Railway head-light with a circular burner lamp was used in the outer light. The new lighthouse for the inner light was built at a total cost of $1,098.88, which included the lantern room and lighting apparatus, and its light was placed in operation at the opening of navigation in 1877.

Darius Smith, Superintendent of lights above Montreal, visited the Kaministiquia Range Lights in 1877 and gave the following report:

Arrived here on the 3rd August, at 8 p.m. Visited this Station on the morning of the 4th, and found everything in very good order. The dwelling attached to the tower is much too small, and I would recommend an addition for a store house, 15 feet six inches by 20 feet, as the Keeper has no room or cellar for that purpose.

The tower is of wood, painted white, with a lantern of galvanized iron, with one mammoth flat-wick lamp with 17-inch reflector; the lantern is four feet in diameter, and can be seen 5 miles.

The outer range light is a small- square tower, with a ladder outside for keeper to reach the lantern, which is a small one; contains one mammoth flat-wick lamp, with 17-inch reflector; and when in one with the upper light lead through the buoys over the bar.

Daniel Morrison is the Keeper, who has nine in family. I would recommend that 50 acres be secured for lighthouse purposes. A raised plank walk is required from the dwelling to the bank of the river, as the land is overflowed in the spring and fall. This Station is very well kept.

In 1878, the Department of Marine raised Keeper Morrisons annual salary from $150 to $200 as he also tended the four buoys marking the channel at the mouth of the river. Keeper Morrison served eight years as keeper, but the longest-serving keeper at the station was John Armstrong, who was appointed keeper in 1894 and served until 1920.

In 1894, William P. Anderson, the chief engineer for the Department of Marine, drew up plans for raising the back and front towers ten feet each, renewing the elevated walk between them, and securing the foundation of the back lighthouse. A $232 contract was awarded to complete the work, which saw the back lighthouse increased in height to forty feet and the front tower increased to thirty feet in height.

On August 1, 1901, the colour of the range lights was changed from fixed white to fixed red so they could be more readily distinguished from the bright lights in Fort William. Kaministiqua River Range Lights had to be changed in 1904 as the Canadian Pacific Railway Company received permission to construct a coal unloading and storing plant on the ground occupied by the lights. The front light was accordingly moved 100 feet toward the bay along the line of the range and placed atop an open post foundation that raised the height of the light twelve feet. A steel, skeletal tower, that surrounded a column of latticework that projected thirty-three feet above the platform on the top of the tower and on which a lantern was hoisted and held in place, replaced the old back lighthouse, which was torn down. The height of the new back tower was 122 feet, and the tower was painted red. A black square, six feet on a side with a white diamond in its middle, served as a daymark near the top of the rear tower. An incandescent electric light was exhibited at a height of 128 feet above the lake from the top of the back tower. The Canadian Pacific Railway paid for the changes to the lights and also for the construction of a new dwelling for Keeper Armstrong.

The entrance channel to Kaministiquia River was dredged in 1908, and it appears that at this time the range lights were discontinued and replaced by a seventh-order fixed red light displayed from a lantern atop a pole on the southerly side of the Empire elevator wharf. A 1910 Light List shows that a light of this description, known as Fort William Light, was in service at the entrance to Kaministiquia River. Keeper Armstrong served until 1920, around which time an electric light replaced the oil light at the river entrance.

In 2021, a mast atop a building on the southern end of a detached breakwater was displaying a flashing red light that served as Kaministiquia River Entrance Light.

For a larger map of Kaministiquia Range Lighthouse, click the lighthouse in the above map.

No light exists at this location today. The river entrance is marked by a light on the southern end of a detached breakwater.