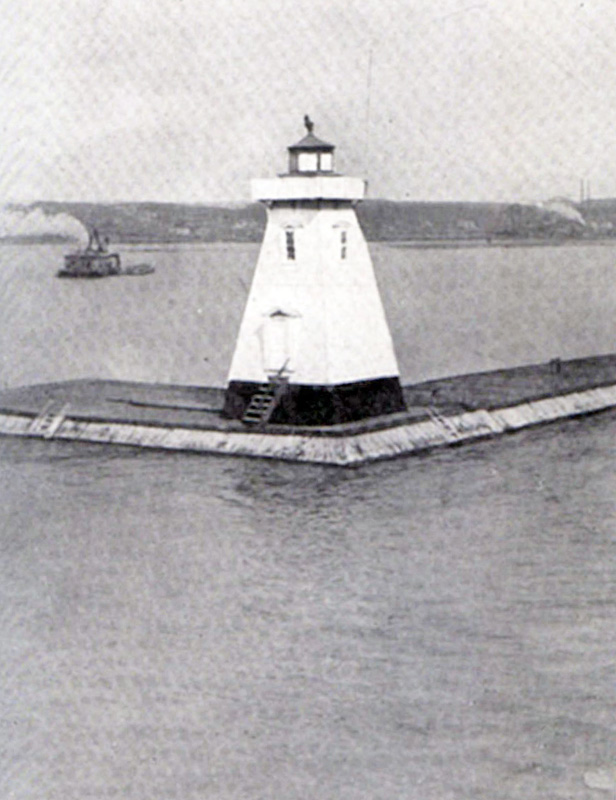 Thunder Bay is a large bay on the northwest shore of Lake Superior that is about fifty kilometres long and twenty-two kilometres wide. An early settlement on the bay was named Prince Arthurs Landing in 1870 to honor Prince Arthur, Queen Victorias son, who was then serving with his regiment in Montreal. In May 1883, officials of the Canadian Pacific Railway renamed the town Port Arthur.

Port Arthur and nearby Fort William served as a railroad terminus and a major port on the Great Lakes. In 1883, a railway line was opened connecting Winnipeg and its grain to the port. Port Arthur and Fort William amalgamated in 1970 to form the city of Thunder Bay.

In 1881, Edmund Ingalls of Fort William built a small wooden lighthouse on the government pier at Prince Arthurs Landing. The lighthouse was a square wooden tower, painted white, that measured thirty-six feet from the pier to the vane on its lantern room. John Cooper was appointed the first keeper of the fixed, white pier light in October 1882 at an annual salary of $200.

In 1883, the sum of $50,000 was appropriated for the construction of a breakwater and for dredging the mouth of the Kaministiquia River. The following year, another $150,000 was allocated for the breakwater, and the town of Port Arthur chipped in $25,000 of its own.

In 1899, Keeper Cooper received a hand-operated foghorn that he was required to sound to answer signals from vessels during thick weather. On the night of October 15, 1901, the colour of the light exhibited from the breakwater lighthouse was changed from white to red in order to be more easily distinguished from the lights in town.

The following description of the breakwater at Port Arthur and Fort William was published in 1905:

Port Arthur is rendered safe by breakwaters parallel to the shore, the entrance being through a gap marked by a fixed red light, 43 feet high, upon the northern portion of the breakwater. The channel is dredged, and 19 feet may be carried to the Canadian Northern Railway Companys elevator. The inner harbour at Port Arthur is therefore formed by two cribwork breakwaters extending in front of the wharfs on the water front of the town. The more northerly breakwater is 3,654 feet long, and has a general trend south of 25 degrees west from a point outside the elevator wharf at the north end of the town. The lighthouse is on this breakwater, and is situated at 31 feet from its south end, showing, as above stated, a fixed red light 43 feet high.

The breakwaters are sunk generally in 17 and 18 feet of water, and have a height of five feet six inches above low water. On the lake side the crib work is made vertical up to about low water line, and from there to the top it is finished with a slope one in one, strongly sheeted and the angles protected by boiler plates. The construction of this breakwater has converted what was formerly a dangerous and exposed roadstead into a safe and commodious harbour.

John Cooper was in charge of the lighthouse through the 1907 season, and then J.C. Banks took over as keeper the next spring. At the opening of navigation in 1911, the characteristic of the light was changed to a fourth-order occulting white light that was exhibited for five seconds followed by a three-second eclipse. A fog bell, operated by machinery, was added to the lighthouse in 1911 to be tolled once every six seconds in thick or foggy weather.

In 1939, the Canadian Dredge & Dock Company of Toronto received a contract to build a new Port Arthur Breakwater at an estimated cost of $416,000. This work allowed the old, inner breakwater to be removed to afford plenty of room for massive freighters to navigate in the harbour.

For a larger map of Port Arthur Lighthouse, click the lighthouse in the above map.