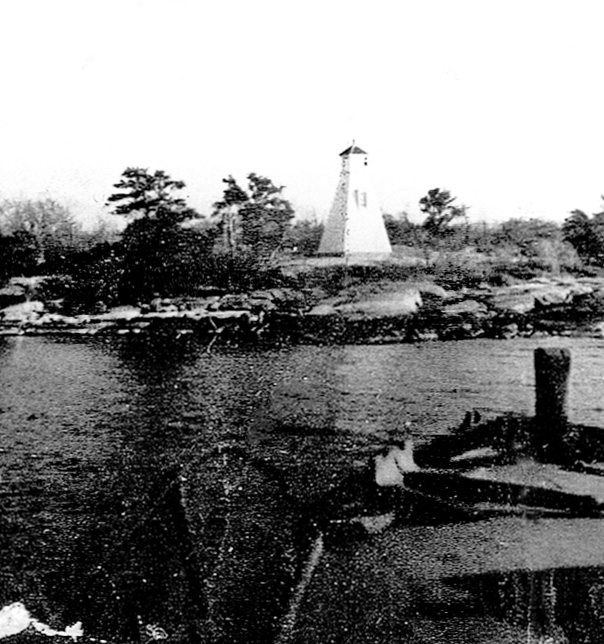 Lake of the Woods, a massive body of water sprinkled with thousands of islands, straddles the borders between the Canadian provinces of Ontario and Manitoba and the State of Minnesota. Having a width and length of over 100 kilometres and being home to over 14,500 islands, the lake has an extensive shoreline that reaches a length of over 100,000 kilometres. Lake of the Woods is fed by Rainy River, which forms a section of the Ontario-Minnesota border, and drains into Winnipeg River and then into Lake Winnipeg in the Province of Manitoba.

The Canadian Parliament provided funds for a lighthouse to mark the entrance to Rainy River from Lake of the Woods in 1884, and the light from a square wooden tower, with a height of thirty-three feet, was placed in operation at the opening of navigation in 1866.

The light is a fixed white light elevated 36 feet above the water. It should be visible 11 miles from all points of approach by water. The illuminating apparatus is dioptric, of the seventh order.

The building was erected under contract by Mr. T. M. Harrington, of Keewatin, for the sum of $467.50. The total expenditure in connection with the erection of this light has been $525.37.

Two range lights were put in operation on the 17th October last, in Bishops Bay, to lead through the Bay, from Bishops Point to the small islands north-east of Royal Island, clear of shoals on each side of the channel. The front building stands on a small island lying about 200 feet north of the northeast extremity of Royal Island.

The lighthouse is a square wooden tower with sloping walls, surmounted by a square wooden lantern, the whole painted white. The height of the tower, from the ground to the vane on the lantern, is 20 feet.

The light is a fixed white light elevated 17 feet above the summer level of the lake, it should be visible live miles from all points of approach by water. The illuminating apparatus is dioptric of the seventh order.

The back range tower stands on the north shore of Royal Island, near its east end. It is a square wooden tower with sloping walls, surmounted by a wooden lantern, the whole painted white. It is S. 30° E. about 400 feet distant from the front range tower. The height of the building from the ground to the vane on the lantern is 28 feet.

The light is a fixed white light elevated 26 feet above water; it should be visible five miles in and over a small arc on each side of the line of range. The illuminating apparatus is catoptric.

These two buildings were erected by Mr. T. M. Harrington at a contract price of $639.50, the total expenditure in connection with their establishment being $747.37.

Jonathan Morriseau served as the keeper Ferris Island Lighthouse from 1898 until at least 1921. The 1921 census shows that Keeper Morriseau was eighty-five and still in charge of the lighthouse. It is likely that a son took care of the light starting around this time. J.M. Morriseau was still listed as keeper of the light in 1931 when the light appears to have been automated as no keepers were listed after that year.

Numerous cylindrical masts mark islands and reefs in Lake of the Woods today, and have replaced all of the original square wooden towers built in the late 1800s and early 1900s. The square wooden lighthouse on Ferris Island served until 1962, when a pipe mast with a white and green daymark was placed seventy-five feet away from where the tower had stood. The characteristic of the new light was a white flash every five seconds. In 2021, a cylindrical mast with a red and white rectangular daymark with a green square at its centre was showing a flashing white light with a period of four seconds from Ferris Island.

For a larger map of Ferris Island Lighthouse, click the lighthouse in the above map.