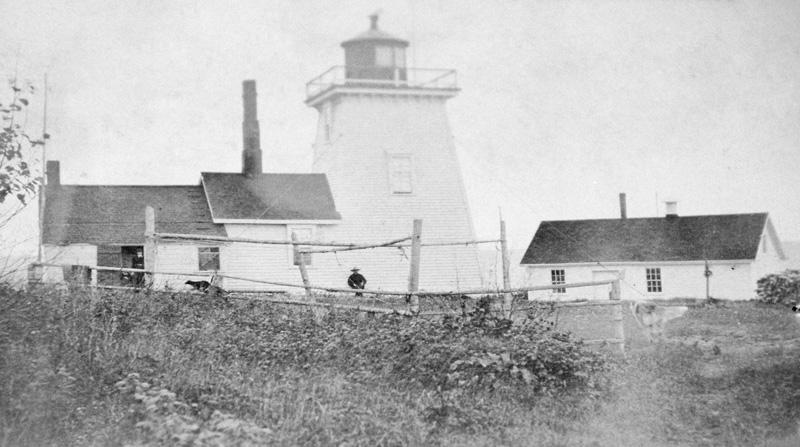 Thunder Bay is a large bay on the northwest shore of Lake Superior that is about fifty kilometres long and twenty-two kilometres wide. Sibley Peninsula, named for Alexander H. Sibley, president of a company that developed a mine there, forms the eastern side of Thunder Bay. The southernmost portion of the peninsula is home to a towering rock formation that resembles a recumbent man with his arms folded across his chest, and in 1944, the majority of the fifty-two-kilometre-long peninsula was set apart as Sleeping Giant Provincial Park. In 1874, the Department of Marine built a lighthouse on Thunder Cape, the southern end of Sibley Peninsula, to guide mariners into Thunder Bay, where the settlements of Port Arthur and Fort William were found. In January 1970, these two towns were amalgamated to form the city of Thunder Bay. The following description of the new Thunder Cape Lighthouse appeared in the Department of Marines annual report for 1874:

A very superior light-house has been erected during the past year at Thunder Cape, Lake Superior, which will prove of much service to the steamboat trade on the Lakes. The light exhibited is revolving white, on the catoptric principle, showing a flash every minute, is visible from all points of approach, and in clear weather will probably be seen at a distance of from 12 to 18 miles. It was first put in operation on the 8th October last. The tower is a square wooden building, with dwelling attached, and is painted white.

The total cost for the lighthouse, including the iron lantern and revolving apparatus, came to $3,264, and Duncan McEachen was appointed the lights first keeper on August 8, 1874 at an annual salary of $500.

The iron lantern room had a diameter of nearly eight feet and contained two mammoth flat-wick lamps that were set in twenty-inch reflectors on an iron frame. The lighthouse apparatus revolved once per minute to produce a flashing white light. When the inspector called in 1877, Keeper McEachen was on leave and the lighthouse and dwelling were found in a very dirty condition. The 1881 census shows that Duncan and Rachel McEachen had eight children ranging in age from twenty-one to less than a year, so it was understandable that the station might be a bit unkept. The report for 1878 records that the station was in good order, so the untidiness found in 1877 could have been the result of the temporary keeper.

Keeper McEachen was in charge of the lighthouse until 1883, when S.B. Richmond was placed in charge of the light. In 1885, John George and D. Carrie were awarded a $2,350 contract to construct a fog alarm on Thunder Cape. The construction was carried out during 1886, and the fog alarm was placed in operation on September 1 of that year. The rectangular fog alarm building was placed fifty yards south of the lighthouse and housed a horn that sounded a five-second blast every thirty second using compressed air. In 1906, a diaphone foghorn, which sounded a three-second blast every thirty seconds, replaced the steam horn. A twenty-foot-long extension was built on the east side of the fog alarm building and a concrete floor was laid for the new equipment.

In 1909, a fourth-order lens that produce a bright flash every fifty seconds replaced the revolving catoptric light in the lantern room. The illuminant used in the new lens was petroleum vapour burned under an incandescent mantle. On October 14, 1913, the intensity of the light at Thunder Cape was increased to 20,000 candlepower through the installation of a single-flash, long-focus reflector that produce a white flash every ten seconds. A concrete smokestack was also built for the fog alarm building around this time.

During the winter of 1911  1912, Keeper William Craig visited the lighthouse in early March while it was still closed for the season and noted that dead ducks were strewn in thousands on the ice in the vicinity of Thunder Cape. It was a bitterly cold winter, and Keeper Craig said it was the first time he could remember that he was unable to see mist arising from the open water of Lake Superior beyond Isle Royale. The ice on Thunder Bay was up to three feet thick, and the entirety of the surface of Lake Superior was believed to be frozen. Keeper Craig found that the ducks at the cape that had not already died of starvation could be approached and picked up by hand. They were so thin that they were practically just feathers and bones.

Thunder Cape is now home to a bird migration monitoring station that has been counting and banding birds since the early 1990s. Over 300 species of birds have been documented on the cape and more than 200 species have been banded. Room and board are supplied on the cape during the peak migration periods for volunteers to help with operations.

For a larger map of Thunder Cape Lighthouse, click the lighthouse in the above map.

The modern light at Thunder Cape is best seen by boat.