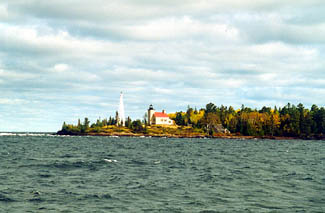 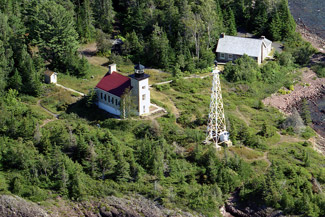 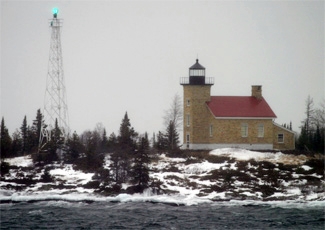 During the summer of 1840, Douglass Houghton, Michigans first state geologist, led a small party on an expedition to explore that area of the Upper Peninsula bordered by Lake Superior. On July 3, the party reached Copper Harbor, where it spent several days exploring the surrounding country and blasting for ores. After discovering veins of copper that varied in width from a few inches to fourteen feet, Houghton wrote, I hope to see the day when instead of importing the whole immense amount of copper and brass used in our country, we may become exporters of both.

Houghton wouldnt live to see that day, as he drowned when his boat capsized off Eagle River during a gale on October 13, 1845, but he rightly foretold that the rich mineral deposits of the Upper Peninsula would only be developed with many difficulties and embarrassments.

In 1842, the Ojibwe signed the Treaty of La Pointe, ceding their mineral-rich territory and triggering a land rush that saw miners and investors buying up what they hoped was copper-rich real estate. The following year, the federal government opened a Mineral Land Agency at Copper Harbor to issue exploration permits and land leases, and Fort Wilkins was built in 1844 to maintain law and order.

The Pittsburgh and Boston Mining Company commenced operations at Copper Harbor in 1844, and over the next year expended $28,000 in shafts at Hays Point and near Fort Willkins while realizing only $2,968 in copper. Of the twenty-four mining companies formed between 1844 and 1850, only six paid dividends. The Pittsburgh and Boston Mining Company went on to discover the Cliff Vein near Eagle River in 1845, and over the next forty years, more than thirty-eight million pounds of copper was extracted, resulting in $2.5 million in dividends being paid to its investors.

On March 3, 1847, Congress appropriated $5,000 for a lighthouse at Copper Harbor, and after competitive bidding, a contract was awarded to Charles Rude for its construction. Work began in August 1848 on a forty-four-foot-tall stone tower, which tapered from a diameter of thirteen feet to eight-and-a-half feet, along with a one-and-a-half-story dwelling that measured thirty-four by twenty feet and had an attached kitchen. Located on Hays Point, Copper Harbor Lighthouse commenced operation in the spring of 1849 and was just the second lighthouse to be activated on Lake Superior. Completion of the Sault Ste. Marie Canal in 1855 triggered an explosion of new lighthouses on the largest of the Great Lakes, and by 1860, over a dozen lights marked the south shore.

Henry Clow, the first keeper of Copper Harbor Lighthouse, was tasked with minding thirteen lamps, which were set in fourteen-inch reflectors and produced a fixed white light. The work became a bit easier for Keeper Napoleon Beedon, when a sixth-order Fresnel lens, illuminated by a single lamp, replaced the antiquated array of lamps and reflectors in 1856. A more powerful fourth-order Fresnel lens was installed in the lantern room in 1859.

Napoleon Beedon was born in 1836 near Detroit, but his parents relocated the family to the Upper Peninsula a decade later. Napoleon lost an arm as a teenager while employed as an assistant blacksmith. The Beedon family moved to Copper Harbor in 1851 so that John, the patriarch, could manage the Iron City Copper Mine, located five miles from Copper Harbor. Napoleon was appointed keeper of Copper Harbor Lighthouse in 1855 and served in that role for fourteen years until he resigned on September 9, 1869.

Napoleon Beedon moved to Munising after his resignation, and the next year he was back in the employment of the lighthouse service as keeper of Grand Island East Channel Lighthouse. After three years at that lighthouse and three years at the Grand Island Harbor Range Lights, Beedon became head keeper of Au Sable Point Lighthouse, where his wife served as his first assistant from 1876 to 1879, when the couple resigned from the service for good.

Like many of the lighthouses built before the establishment of the Lighthouse Board in 1852, Copper Harbor Lighthouse quickly fell into disrepair, and on April 7, 1866, Congress had to allocate $13,700 for a replacement. The second Copper Harbor Lighthouse was built with widely used plans and consists of a square, brick tower attached to the gable end of a one-and-a-half-story keepers dwelling. The forty-two-foot-tall tower is nine-feet, eight inches square and features a foot-thick outer wall and a four-inch-thick, circular, inner wall that encloses a cast-iron staircase for accessing the dwellings second floor and the decagonal lantern room.

Copper Harbor Lighthouse was discontinued following the 1883 navigation season, as the Lighthouse Board felt that the range lights, established in the harbor in 1865, were all mariners needed. The lighting apparatus was removed from the lighthouse, and the keeper of the range lights was assigned to look after the property.

The Lighthouse Board soon changed its mind when mariners complained that the range lights could not be seen beyond the harbors entrance, and on June 1, 1888, Copper Harbor Lighthouse resumed operation under the care of Henry Corgan. When he heard the light was going to be re-established, Henry, who was serving at Peninsula Point Lighthouse, promptly wrote to the Lighthouse Board:

My light is so situated that I am unable to send my children to school and in addition to that my wife does not enjoy good health here. It would be a great favor for me to obtain the transfer.

I have resided in Copper Harbor for 25 years, and have been in the Lt. House Service 10 years and this is the first favor I have asked during that length of time. I would be willing to pay my own transfer expense providing I receive the appointment for Copper Harbor light.

In 1892, Keeper Corgan built a small boathouse, which was connected to the lighthouse by 200 feet of sidewalk. The original old stone dwelling was repaired in 1903 and converted into a combination storeroom, oil house, and barn. A larger boathouse was constructed in 1907, along with a boat landing built with wooden cribs that were filled with stone and decked over.

On June 23, 1919, the characteristic of Copper Harbor Lighthouse was changed from fixed white to a white flash every three seconds, after an acetylene lighting apparatus was installed in the towers Fresnel lens. As the acetylene light was turned on and off by a sun valve, a resident keeper was no longer required, and Keeper Corgan moved to St. Clair Flats Canal Range after thirty-one years of service at Copper Harbor. Henry Corgan began his lighthouse career at the age of sixteen, serving as an assistant to his father, Charles Corgan, at Manitou Island, and when he retired in 1924 at age seventy, he was reportedly the oldest lighthouse keeper in Michigan. After his service at Manitou Island, Charles Corgan became keeper at Copper Harbor in 1873 and served until 1881, during which time he also served as caretaker for the abandoned Fort Wilkins.

No longer needed, Copper Harbor Lighthouse was leased in 1927 to Roger T. Vaughan, a Chicago-area physician, who used it as a summer residence for roughly two decades. As servicing the light in the attached tower was seen as obtrusive, a sixty-two-foot-tall skeletal tower was erected near the lighthouse in 1933 and equipped with an acetylene light that displayed a white flash every five seconds. The light was converted to electricity in 1937.

In 1957, the Coast Guard sold Copper Harbor Lighthouse to the State of Michigan for $5,000. The historic lighthouse was incorporated into nearby Fort Wilkins State Park, and restoration efforts commenced in the early 1970s.

Ceremonies to dedicate the restored lighthouse, outfitted with exhibits on the history of its keepers and shipping on Lake Superior, were held on August 3, 1975. Trips out to the lighthouse commenced the following June aboard the Copper Queen II, a boat operated by a concessioner for the states Department of Natural Resources. During the summer of 1975, archaeologists with Archaeological Research Services of Tempe, Arizona discovered the foundation walls of the original tower, along with nails, mortar, glass, and cast-iron window frames, just west of the 1866 lighthouse.

Copper Harbor Lighthouse was placed on the National Register of Historic Places in 2012. The nominated complex includes the 1848 stone keepers dwelling, the 1866 schoolhouse-style lighthouse, the 1866 privy, and the 1933 steel skeleton tower, which remains an active aid to navigation.

Located on the eastern edge of the entrance to the harbor in Copper Harbor, near the tip of the Keweenaw Peninsula.
Latitude: 47.47419, Longitude: -87.8599

For a larger map of Copper Harbor Lighthouse, click the lighthouse in the above map.

The road that leads to Copper Harbor Lighthouse is not open to the public. To visit the lighthouse, you can take a boat tour from Copper Harbor Marina, located one-quarter mile west of Copper Harbor and just north of Highway 26. Boat service is available from the Saturday before Memorial Day to the first week of October. For more information, call (906) 289-4966.