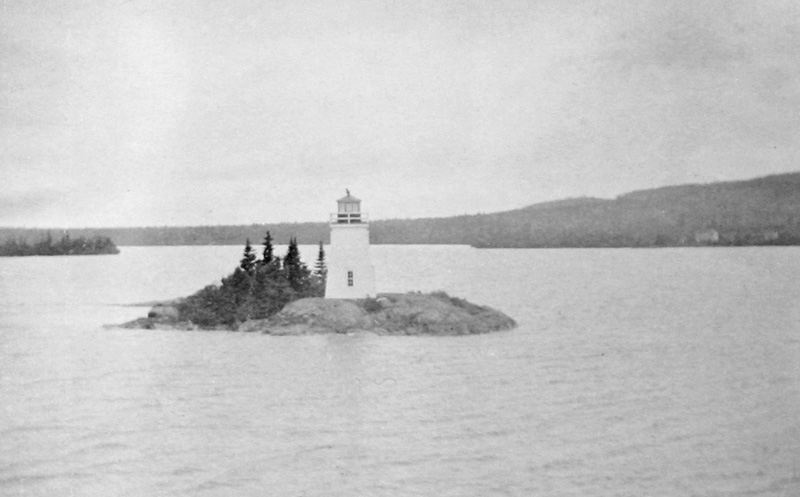 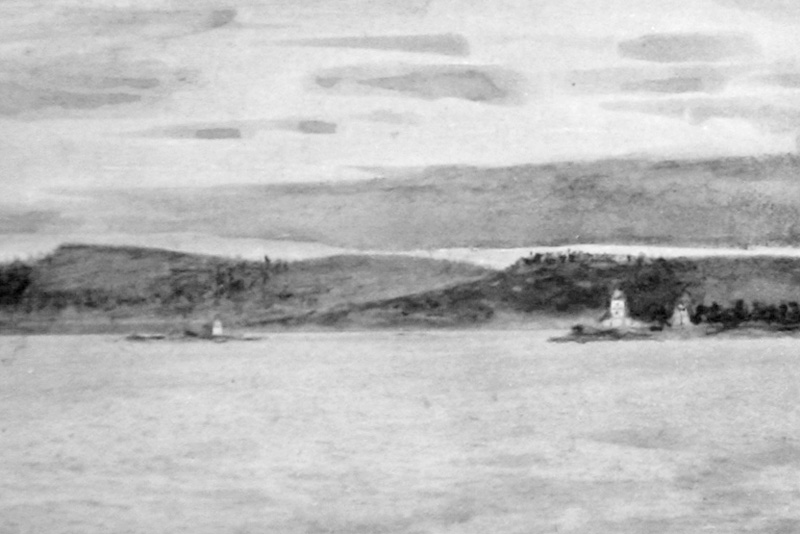 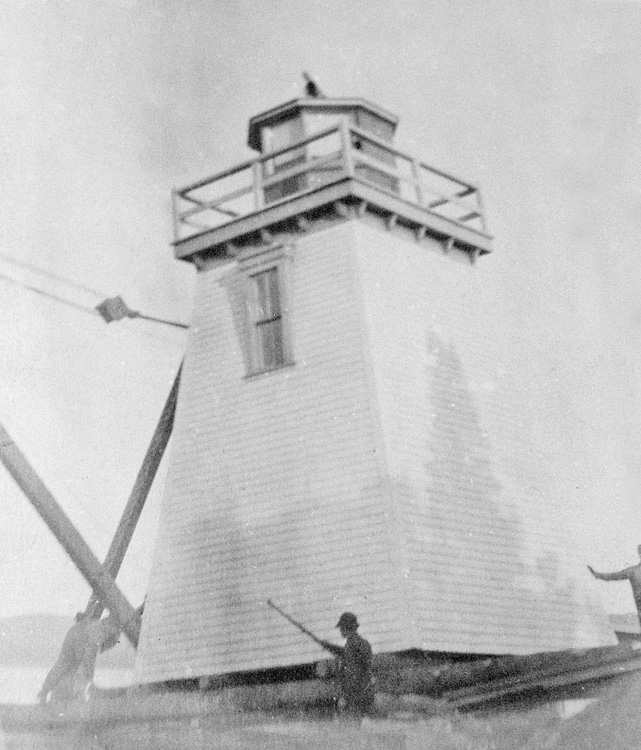 Measuring twenty-six kilometres east to west and ten kilometres north to south, Michipicoten Island is the third-largest island in Lake Superior (after Isle Royale and Saint Ignace Island) and is blessed with numerous lakes and a fine bay on its southern shore known as Québec Harbour. As the island is sixty kilometres from Michipicoten Harbour, the nearest port on the mainland, fishermen and lighthouse keepers would typically remain on the island all season rather than risk unnecessary crossings.

In 1872, Parliament provided $8,000 for the construction of three new lights to assist the rapidly expanding trade on Lake Superior: one at Porphyry Point and two at Michipicoten Island. To reach Québec Harbour, mariners needed to pass between Davieaux Island and Hope Island, two long, skinny islands that lie one kilometre off the harbours entrance. Charles Perry built a small light on Agate Island, just inside the harbour, to guide mariners between the islands and into the harbour, and a larger light on the tip of the peninsula forming the eastern side of the harbour to serve vessels sailing along the lake between Thunder Bay and Sault Ste. Marie.

As it needed to be seen at a greater distance, the main light, known as Michipicoten Island Light, was originally equipped with five No. 1 circular-burner lamps set in twenty-inch reflectors while the light on Agate Island had two flat-wick lamps set in sixteen-inch reflectors. Peter McIntyre, who had previously served as keeper of Point Pelee Lighthouse, was placed in charge of the Michipicoten Lights, which were placed in operation in the late summer of 1872. The total cost for the two lights at Michipicoten Island and the one on Porphyry Point came to $7.549.37. A fog bell was added to the main light in 1873 to help mariners find the harbour during foggy weather.

The following description of the two lights was made by Darius Smith, Superintendent of Lighthouses above Montreal, after visiting them in 1878:

Arrived in Quebec Harbour on the 25th July, at 11.30 p.m., and landed stores and oil; it is a square wooden tower, 32 feet high from base to vane [with dwelling-house attached], and shows a white fixed catoptric light from an iron lantern 8 feet in diameter, containing three mammoth flat-wick lamps, with 20 inch reflectors; size of glass, 30 x 36 inches. A bell tower is in operation here, weight of bell is 960 lbs.; the machinery is in very good order.

We also inspected Agate Island Lighthouse; it shows a fixed white light of the catoptric order, and is 20 feet high from base to vane, and is built on a rock at the mouth of the harbour, and is of great service to vessels entering the harbour of Quebec; it has a wooden lantern, 8 feet in diameter, and burns two mammoth flat-wick lamps, with 16-inch reflectors. Size of glass, 30 x 36 inches. Both these Stations are kept by Peter Mclntyre, who has them in very excellent order; he has four in family.

Following the death of Keeper McIntyre, Hyacinthe Davieaux was placed in charge of the lights in 1881. The Department of Marine extended the traditional payment of two months salary, amounting to $72.50, to the family of Keeper McIntyre. At the time of his hiring, Hyacinthe Davieaux had his wife Louisa living with him along with five daughters and a son named Charles, who would replace his father as keeper in 1910.

In 1913, Keeper Charles Davieaux hatched a plan to make millions off of Michipicoten Island that he shared with the editor of Rod and Gun in Canada:

I am a light-house keeper at Michipicoten Island, Lake Superior. The Island is about 18 miles long by 6 miles wide and contains over 30 lakes and streams which are abundantly furnished with brook trout and beautiful scenery. The scenery is most picturesque; there are many strange caves on the Island, which abound with rabbits, weasels and muskrats. Some forty years ago there were plenty of fur bearing animals such as beaver, lynx, otter, mink, fishers, bears, caribou, marten and red, black cross and silver foxes. About this time the Indians did so much killing of these animals that they became exterminated, leaving only the rabbits, muskrats, weasels and foxes. Ten years ago there were plenty of foxes but as there was no law to prevent any one from poisoning foxes men set poison all over the Island and the foxes were also exterminated.

Now, Mr. Editor, can you give me an idea how to get rich men to stock this Island once more. Stocking it would mean millions in ten years. Perhaps the Government would take up the matter as the Island is practically all of it owned by the Government.

Moose and red deer would do well there. The nearest point from the Island to the north shore is about 12 miles. My station on the Island is about half way or in the middle of the Island on the south side, while there is another light house keeper at the extreme east end of the Island, commanding a view of the north shore. We would do anything to keep the game from being destroyed by greedy people.

I have been living on the Island for thirty-two years and if I had the means to-day to restock it I would go right ahead and do so with all kinds of fur-bearing animals. I shall be pleased to furnish information to any person who will interest themselves in the matter.

In May 1915, a sixth-order lens replaced the catoptric apparatus used in the lantern room atop Agate Island Lighthouse.

When the fog bell, tolled by machinery, broke in 1898, it was discontinued rather than repaired, as the harbour was no longer frequented by much shipping. This changed in 1917, after the Department of Public Works deepened the channel leading into the harbour to create a harbour of refuge for lake steamers that was commodious and absolutely sheltered. Enhanced navigational aids were deemed necessary for the improved harbour whose entrance channel was now at least 200 feet wide. A reinforced concrete tower was built on Davieaux Island, to replace Michipictoen Island Lighthouse on the east point of the entrance to the harbour, and two range lights were built on the north shore of the harbour to replace the light on Agate Island. Michipicoten Island Lighthouse, minus its lantern room, was retained as a dwelling for the keeper. The old lighthouse from Agate Island was relocated to serve as the front light of the new range, known as Quebec Harbour Range, and a square, forty-two-foot-tall tower was erected 600 feet inland to serve as the rear range light. Mariners could use Davieaux Island Lighthouse to approach Michipicoten Island and then follow the new range lights to safely pass between Davieaux Island and Hope Island and enter the harbour.

Davieaux Island was known previously as Long Island, but it was renamed to honour the Davieaux family, who spent over fifty years taking care of the lights on the south shore of Michipicoten Island. The following description of Davieaux Island Lighthouse was printed by the Lake Carriers Association in 1918:

Construction of a new lighthouse on the summit of Davieaux Island, formerly known as Long Island, south of Michipicoten Island, to the west of the course into the dredged cut at the entrance to Quebec Harbor of Refuge, Lake Superior, was completed in September, 1918.

The new lighthouse is on land 92 feet above the level of the lake and is 100 feet from the north shore of the island, and 2,400 feet from its east extremity in latitude 47 degrees, 41 minutes, 42 seconds; longitude west 83 degrees, 48 minutes, 40 seconds.

The light is shown from a white reinforced concrete octagonal tower, surmounted by a red, octagonal iron lantern and is visible seventeen miles from all points of approach. The light is at a height of 129 feet above the level of the lake, the tower having a height of forty-four feet from its base to the top of ventilator on the lantern. Petroleum vapor burned under an incandescent mantle is the illuminant.

The hand foghorn heretofore maintained at the old lighthouse will continue to be operated from the same place. It is used to answer signals from steamers in the vicinity of the station in thick weather.

In July 1919, a fog bell was established on the east end of Davieuax Island, sounding one stroke every eight seconds as needed.

Charles Davieaux and his wife raised seven children at the remote station, one of whom, May, a daughter, died on the island at the age of seven. Keeper Davieaux built boats on Michipicoten Island, and the first one he worked on was a launch for his son Edwin. After learning that Edwin, who had gone off to fight in World War I, had drowned at Camp Borden, Keeper Davieaux named the boat the Ste. Claire after his youngest daughter. Our house was on mainland, Claire recalled, and father would row across the bay every evening where he would have to spend the night. He would have to wake up around midnight and climb to the light and wind the giant spring which would turn the light until morning.

The keeper of Davieaux Island Lighthouse and the Québec Habour Range Lights resided in the residence that was part of the old main light until a new dwelling was built at the front range light in 1938 and then on Davieaux Island itself in 1965.

For a larger map of Agate Island Lighthouse, click the lighthouse in the above map.

No light is exhibited from the island today.