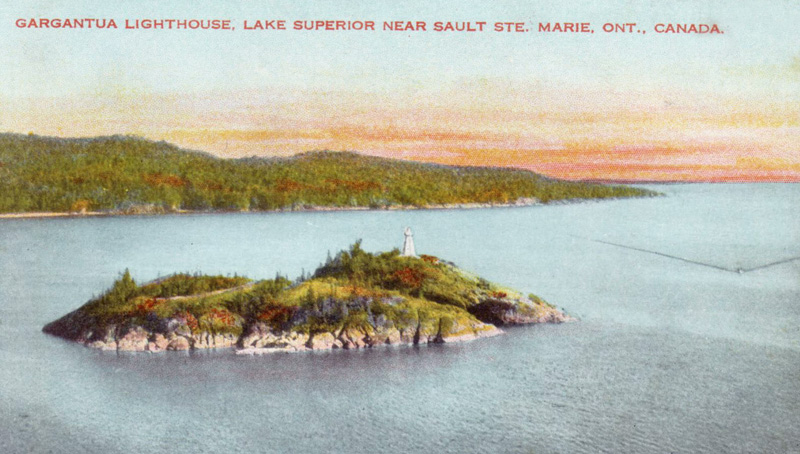 Gargantua Harbour is a naturally protected anchorage on the eastern shore of Lake Superior on which a fishing and logging village was established. The settlement reached its peak in the 1930s and 1940s, but was abandoned by the 1960s. Gargantua Island is situated near the entrance to the harbour, and in 1889, the Department of Marine built a lighthouse on it.

John George of Port Elgin was awarded the contract for the construction of the lighthouse and necessary buildings for $2,999, and the station was completed in 1889 at a total cost of $3,750.97. A wooden, hexagonal tower that stood forty-three feet tall was placed on the summit of the island and was painted white and topped by a red iron lantern room. A small dioptric lens produced a fixed white light that was elevated ninety-seven feet above the lake and could be seen up to fifteen miles. The keepers dwelling was built on the mainland on the north side of the harbour. Louis Miron was appointed the first keeper of the lighthouse on October 26, 1889 at an annual salary of $450.

In 1901, Keeper Miron received a hand-operated foghorn that he was required to sound in response to signals of vessels in the vicinity. Louis Miron lived at Gargantua with his wife Mary, and at least two children: Charles and George. Charles was appointed keeper of the lighthouse in place of his father in 1912, and he served through at least 1937. In 1915, Charles built a shelter shed and made repairs to the tower at a cost of $115.12.

In 1921, the Canadian government provided the C.G.S. Lambton to transport the keepers to and from the lighthouses in eastern Lake Superior. On April 18, 1922, the Lambton sailed out into Lake Superior amid ice floes and delivered Keeper Miron at Gargantua Harbour, before sailing for Caribou Island the next day. Somewhere on the nineteenth, the Lambton went down, taking with it George Penfold, keeper of Caribou Island, and his assistant, and two keepers and one assistant destined for Michipicoten Harbour and Ile Parisienne, along with the Lambtons crew of sixteen.

Early in 1949, fire completely destroyed Gargantua Lighthouse while Tom Miron was serving as keeper, the third generation of the Miron family to fill that role. Neither Tom nor his wife were injured in the fire.

For a larger map of Gargantua Lighthouse, click the lighthouse in the above map.

The modern light is best seen by boat, but a distant view should be possible from Gargantua Harbour.