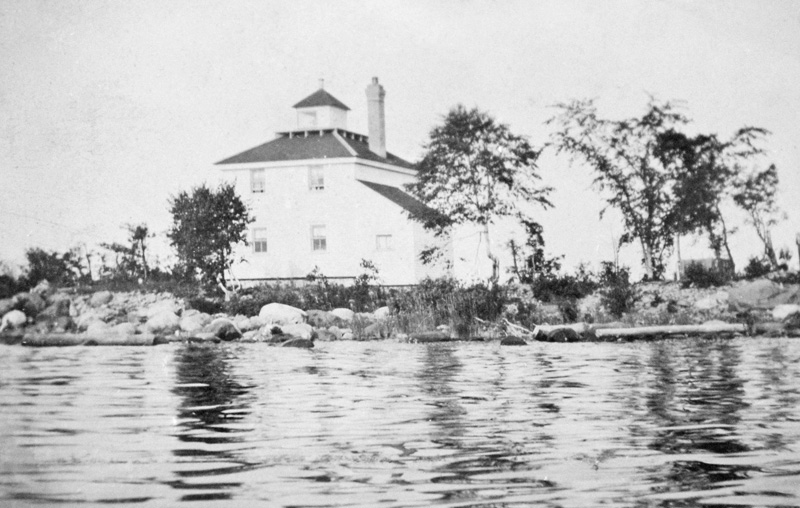 The town of Thessalon is situated on the mainland near the western end of the North Channel. Thessalon River bisects the town, and a lengthy peninsula continues into the channel from the western side of the river entrance. Nathaniel Dyment arrived in Thessalon in 1871 and purchased 300 acres on the east side of the river. In 1876, he built a mill to go along with a store, boardinghouse, and a warehouse.

To aid vessels trading in lumber at Thessalon, Dyment Lumber Bill had a crude light maintained on the east side of the mouth of the river. This light was described in 1878 as a square wooden box about eight feet high with two panes of glass in one side. A lamp set in a parabolic reflector was used to produce the light. The Department of Marine provided supplies for the light, but in its annual report, it was noted that George Dodds, the keeper of the light, received no pay for his services.

In 1898, the Department of Marine established an official navigational aid on Thessalon Point that was announced in its annual report of that year:

A fixed white dioptric light of the seventh order, elevated 30 feet above the water, was put in operation on the opening of navigation this year at Thessalon Point, north channel of Lake Huron.

The lighthouse is a square wooden building, surmounted by a square wooden lantern rising from the middle of the cottage roof. It is 30 feet high from the ground to the ventilator on the lantern, and is painted white, with the roofs of the dwelling and lantern red. It was erected by the department, by days labour, under the supervision of Mr. J. M. Gee, of Ottawa, and cost $1,219.36.

After Thessalon Point Lighthouse was placed in operation, the Department of Marine no longer supplied oil to the small light maintained by the lumber mill, and it dropped the private light from official Canadian list of lights.

James Harvey was appointed the first keeper of Thessalon Point Lighthouse, and he served until his death in 1915. In 1901, he was given a hand-operated foghorn that he was to sound in response to the calls of vessels in the vicinity, and in 1911, he was paid $75 to have a small boathouse built on the point. Esther Harvey took charge of the light after her husbands death. She looked after the light for about twenty-five years and was affectionately known as the Brave Little Lady of the Light. She started at an annual salary of $465 and was making $966 toward the end of her career.

Esther passed away in 1942 after suffering a fractured hip. Her son Jim had started looking after the light a few years before her death, and he served until 1950, when Clyde Lewis was made keeper. Keeper Lewis served for just a year before the light was automated and its characteristic was changed from fixed white to flashing white.

William Thompson served as caretaker of the light from 1952 to 1955, followed by Francis Valley, who served from 1955 to 1959. Thessalon Point Light was discontinued on September 28, 1961. A set of range lights, the front light of which was situated on the north side of the east wharf, had been established before Thessalon Point Lighthouse was discontinued, and the range lights remained in operation for some time.

For a larger map of Thessalon Point Lighthouse, click the lighthouse in the above map.