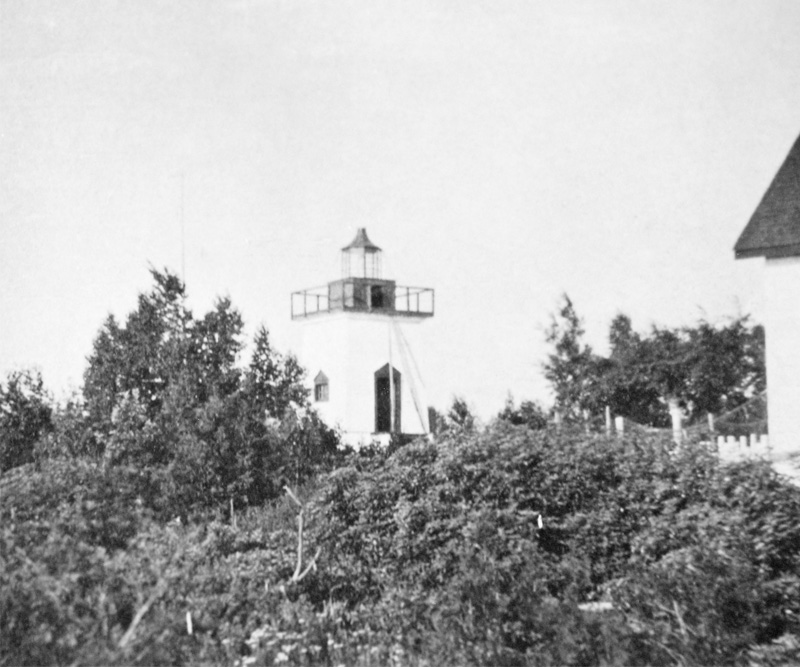 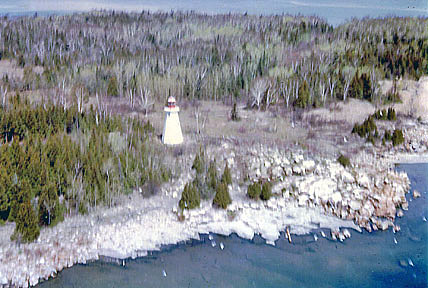 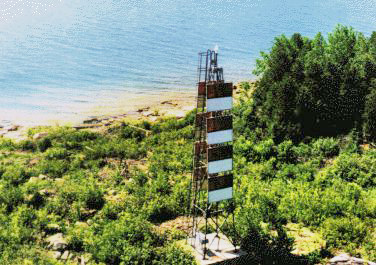 Near the western end of the channel, Sulphur Island and Thessalon Island are located in the channel between Thessalon on the mainland and the northern tip of Drummond Island. Plans for a lighthouse on Sulphur Island were initiated in 1868, as noted by Peter Mitchell, minister of the Department of Marine and Fisheries, in his annual report for 1869:

Previous to the close of the last financial year, I had occasion to bring under the notice of Council the great necessity which existed for the erection of a lighthouse on Sulphur Island, at the head of the Georgian Bay, a short distance from the Bruce Mines, and lying right in the track of steamers running to and from that locality and the Sault St. Marie, and an order was made accordingly, for the erection of a lighthouse on that Island out of a sum appropriated by Parliament for the erection of lighthouses in Ontario. During the summer season of last year an officer of the Department of Public Works was sent up there with the necessary staff of mechanics, and a substantial wooden light house and dwelling for the keeper were erected on the Island, and a light was exhibited for the first time on the 25th October, 1869. The cost of the lighthouse, dwelling for the keeper, and apparatus was $2,359.20. The light is on the catoptric system, with four lamps and parabolic reflectors 15 inches in diameter, two of the lamps being powerful circular burners. This light was of the greatest possible service last fall to the steamers running in that locality, and the captain of one of these reported that the light was seen by him a distance of sixteen miles.

William Shepherd was appointed the first keeper of the lighthouse at an annual salary of $325. The lighthouse was a white, square, wooden tower, that was surmounted by an iron lantern with a diameter of four-and-a-half feet. The height of the tower, from base to vane, was twenty feet, and it was attached to the keepers dwelling. A report on the station in 1878 noted: The foot of stairs to the lantern want moving round, as it opens into keepers wife's bed-room, at which she objects. Keeper Shepherd was still in charge of the lighthouse at this time and lived there with his wife Mary and daughter Maggie. Keeper Shepherd likely died around 1890, as records show his wife was made keeper at that time. Mary Shepherd was in charge of the light for over a decade.

In 1898, George Avis and Patrick Barry crossed the ice from Cockburn Island to Thessalon in a sleigh pulled by a team of horses to procure supplies. On their return trip, their sleigh became stuck in a large crack in the ice. The men spent the first night in the sleigh, and then set off the next day on foot. They soon lost their bearings due to a storm and ended up at the lighthouse on Sulphur Island. The men were badly frostbitten but managed to start a fire in the small stove at the lighthouse. In an attempt to attract attention to their situation, the men lit the beacon in the lantern room. After four days, a woman at Thessalon spotted the light, and a rescue party was sent out. Neither of the two men, who had only a bag of oatmeal for sustenance, could speak when found, and Avis died shortly after being taken to Thessalon.

In October 1906, Sulphur Island Lighthouse, which stood on the south end of the island, was rebuilt. The new structure consisted of an octagonal building, with sloping sides, painted white, and surmounted by an octagonal iron lantern, painted red. The lighthouse stood forty-three feet tall and exhibited a fixed white light from a fifth-order lens at a height of forty-nine feet above the surrounding water. W.H. Brueni directed the construction work, which cost $1,802 and was carried out by day labour.

William Birch was appointed keeper of Sulphur Island Lighthouse in 1910, replacing J.J. King, Jr. Keeper Birch served thirteen years at Sulphur Island and then became keeper of the Wilson Channel Range Lights. Birch was of Ojibwa and English descent, and after her retired in 1939, he received a medal and citation from King George VI for his lengthy service. Birch is credited with saving numerous lives and boats during his time as a lighthouse keeper.

Foster Morris replaced William Birch as keeper on Sulphur Island and served until the light was changed to an unwatched Aga light in 1927. Foster Morris was transferred to nearby Mississagi Island Lighthouse, where he served until that lighthouse burned to the ground in 1948.

For a larger map of Sulphur Island Lighthouse, click the lighthouse in the above map.