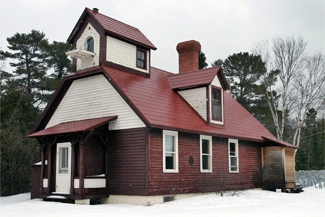 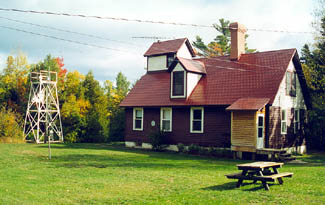 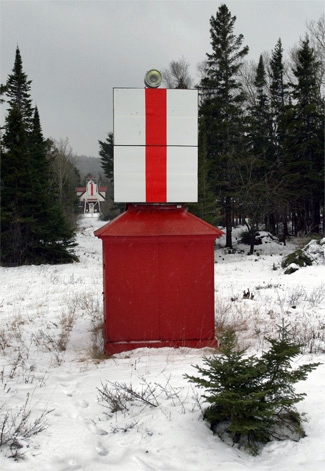 Copper Harbor Lighthouse, the second lighthouse to be built on Lake Superior, commenced operation in the spring of 1849, and on June 20, 1860, Congress appropriated $3,500 for range lights to better mark the entrance to Copper Harbor. To determine the necessity of these and other proposed lights, the Lighthouse Board assigned a committee to visit the Great Lakes during the summer of 1863. The following information on Copper Harbor was included in the committees report:

This is the finest harbor on this part of the coast. It possesses good water, affords a perfect protection, and has sufficient depth on the bar for all vessels navigating the lakes, fifteen feet.

The entrance, which is on one end near the light, is narrow, and though straight, very difficult, because [it is] bounded by dangerous reefs. In fact, it would be impossible to enter the harbor in the clearest night without range-lights, and, accordingly, they are maintained at private expense

The importance of improving this and other harbors is evinced by the fact that, just before the committee entered the lake, a vessel was compelled to run, during a storm, one hundred and sixty miles before she could find protection.

The range-lights proposed by the committee, which will take the place of the private lights, will stand on the reservation which embraces Fort Wilkins and its grounds and buildings.

The value of Copper harbor cannot possibly be over-estimated. It is not only the finest in this part of the lake, but it is in itself a grand basin, destined to become the seat of a rich trade.

The valuable mines in its vicinity have already attracted a considerable population, and built up a town which is respectable in size and appearance, and its future increase is as certain as the natural growth from infancy to maturity.

The War Department graciously transferred a portion of Fort Wilkins reservation to the Lighthouse Board, and in 1865 a pair of range lights was constructed using the appropriation made in 1860. The keeper of the range lights originally lived in one of the Fort Wilkins buildings that were transferred to the Lighthouse Service along with the land on which the towers stood, but in 1867, the War Department requested that the buildings be returned. Consequently, Congress appropriated $5,000 on July 20, 1868 for a new keepers dwelling.

During the summer of 1868, a work crew constructed a six-room, one-and-a-half-story keepers dwelling with a rectangular lantern room mounted atop its lakeward-facing gable to display the ranges rear light at a focal plane of thirty-nine feet above the harbor. Four hundred and fifty feet north of the dwelling stood the twenty-two-foot-tall front range tower, whose beveled corners transformed its seven-and-a-half-foot-square base into an octagonal lantern room. With its new combination dwelling and rear light, the Copper Harbor Range Lights now resembled structures that were constructed during the same time period on the Great Lakes at Grand Island Harbor, Portage River, Baileys Harbor, Presque Isle, and Eagle Harbor.

In 1883, the front tower was struck by lightning. The damage was repaired the following year, and a lightning-conductor was attached to the tower to prevent similar incidents in the future.

An old thirteen-foot-square magazine at Fort Wilkins, located roughly 200 feet east of the dwelling, served as the stations oil house until 1912, when a new oil house was built.

William Tresise, the fifth keeper of the range lights, was born in England in 1839 and brought to America by his parents when he was two years old. The Tresise family eventually settled in Wisconsin, and in 1851, William started working in mines on the Keweenaw Peninsula. During the Civil War, William was shot in the neck and shoulder on July 30, 1864 at Petersburg, Virginia. After working out west for a few years, William returned to Lake Superior in 1869 and was appointed keeper of Copper Harbor Range Lights in 1870.

William Tresise passed away in February 1885 at the age of forty-five, and twenty-four-year-old Charles T. Davis was appointed in his stead. Keeper Davis would be in charge of the light for the next forty-five years. A newspaper article in 1896 noted that Copper Harbor was a splendid place to take short vacations and that lodging could be had from Keeper Davis, who had fitted up his double house with extra furniture and was welcoming boarders for $1.50 a day.

On October 19, 1923, the steamer Samuel Mather ran aground on Gull Rock off the tip of the Keweenaw Peninsula, and the following day two of its crewmembers arrived at Copper Harbor in an exhausted condition. Keeper Davis provided food and shelter to the two men, and then traveled over snow-covered hills during the night to deliver a message to the telegraph office at Calumet. The remaining crew aboard the exposed steamer was removed by the life-saving crew at Eagle Harbor on October 21.

After being converted to acetylene in 1919, Copper Harbor Lighthouse was placed under the care of the keeper of the range lights, and its keeper was reassigned. Like other lights on Lake Superior, the lights at Copper Harbor were only in operation during the shipping season, which typically ran from mid-April to early December. The following letter, written by Keeper Davis in 1924 to his superior, shows his dedication in keeping the lights burning as long as required:

I received your letter of the 9th inst., instructing keepers to keep open until the 18th instead of the 14th, at 11 a.m. on the 16th, at Delaware, when on our way to Calumet. I sent the team on with my wife and our luggage and started to walk back. The snow was quite deep and the walking hard; it was 4:30 when I reached here; the lock on the front tower was frozen up and caused some delay in getting the lantern set up; got the range lights lit at 5 p.m.

It was blowing too hard to row over to the main light, so I got a pair of snowshoes and started to walk around the bay; left here at 5:15; the snow was deep and soft, the snowshoes would sink about a foot and load up with snow at every step, the bushes were loaded with snow and wind falls over the trail and it was almost impossible to keep on the trail. I was panting like a hound before I was half around; it was just 7 oclock when I reached the main light; had the light flashing at 7:05. It took me until 8:10 to get back here. Mr. Bergh came with me from the village and had a fire started when I got back, which was a blessing, as I was wringing wet with perspiration and too tired to eat, sleep, or move. Thirteen miles from Delaware to here, and it seemed twice as far to the main light.

Keeper Davis faithfully maintained a log during his years at the range lights, and the following are two examples of his lengthier entries:

June 24, 1900 - I opened this journal today after having used the old one for nearly fifteen years. Our two children [are] grown from infants to a young man and woman and this little house is the place they have learned to call home. What an uncertain world this is. Who can look into the future? I made the first entry in this journal on a quiet Sabbath afternoon. Who will write the closing one?

September 30, 1930 - Am retiring from the Lighthouse Service today, leaving Mr. Haven in charge of the station. Have spent the most of my life in the service and am leaving it with best wishes and not much regret.

A white steel tower mounted on a white tank house replaced the wooden front tower in 1927, and a skeletal tower replaced the lantern room mounted atop the dwelling in 1964. The range lights were electrified in 1937, eliminating the need for a resident keeper, and in August of that year, a two-year lease for the ranges dwelling was advertised in the local papers. In recent years, the dwelling has been used as a residence for the assistant manager of Fort Wilkins State Park.

For a larger map of Copper Harbor Range Lighthouse, click the lighthouse in the above map.

From the intersection of Highways 26 and 41 in Copper Harbor, continue east on Highway 41 for just over a mile. When you pass over Fanny Hooe Creek, look for a small parking area on your left. The rear range light is now home to the assistant manager of Fort Wilkins State Park, so respect their privacy. From the range lights, you can walk to the harbor and view Copper Harbor Lighthouse across the water.